Jelle Van Damme and the Galaxy want to close their eyes on the loss to Kansas City. (Photo by Duane Barker)

(Carson) – The Galaxy fell behind by two goals in the first half and could never recover in a 2-1 loss to Sporting Kansas City Saturday night before 20,140 at StubHub Center. The loss snapped an eight game Galaxy unbeaten streak.

Trailing 2-0 LA finally broke through in the 77th minute when Dave Romney headed in a shot off a rebound off another header by Jose Villarreal that hit the crossbar. KC goalkeeper Tim Melia batted the ball down but it came down just inside the line in front of the net for the goal.

LA had a couple of opportunities the rest of the way but couldn’t get even.

“We dug a really big hole for ourselves but my God, credit to the team on the second half,” said Galaxy Coach Curt Onalfo. “The effort, with tired legs, the quality amount of possession, the amount of chances we created, I thought we came very close.”

Sporting Kansas City drew first blood when Roger Espinoza sent a 25 foot kick that was able to get by Clement Diop and into the back of the net in the 23rd minute. Diop tried to swat the ball away but missed.

After LA’s Jaime Villarrel got a yellow card card in the 33rd minute, KC struck again.

In the 35th Ike Opara got clearance in front of the net and put an overhead kick past Diop to make it 2-0. It stayed that way as the teams headed to the break. 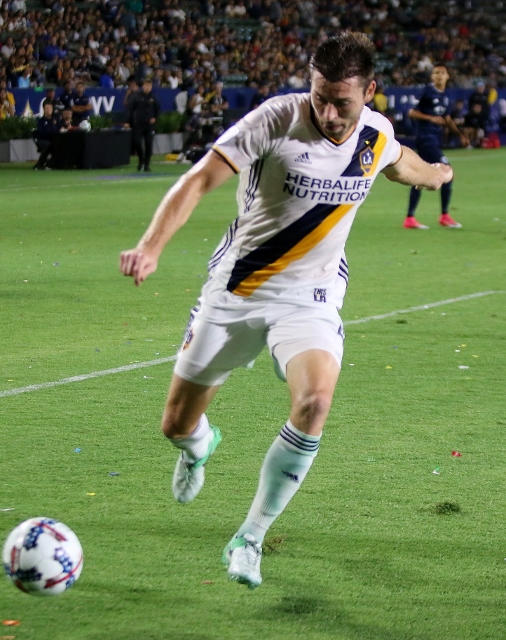 Dave Romney who got the lone Galaxy goal gets off a crossing pass. (Photo by Duane Barker)

Each side had six total shots in the first half but Kansas City had the two that counted.

KC goalkeeper Tim Melia made a nice stop on a blast in the 56th minute and two minutes later  gobbled up a shot from the right side by Emmanuel Boateng.

Joao Pedro entered the game for the Galaxy in the 59th minute for Rafael Garcia. Jose Villarreal came on for Jack McBean in the 62nd minute.

Jose Villarreal had an opportunity in the 64th minute but his header sailed wide left. Romain Alessandrini banged a penalty kick high over the net in the 74th minute.

Gyasi Zardes was replaced by Bradford Jamieson in the 77th minute, and then Romney tied it with the rebound shot.

Three minutes of additional time was added but Sporting Kansas City walked off with the one goal victory. KC almost made it 3-1 but a blast hit the post in stoppage time.

“The goals were soft. You give goals you can’t give away to a top team in the league. You just can’t gift those type of goals to a team that doesn’t concede a lot,” Onalfo said.

With the defeat the Galaxy dropped to 6-6-4 while Kansas City improved to 8-4-6.