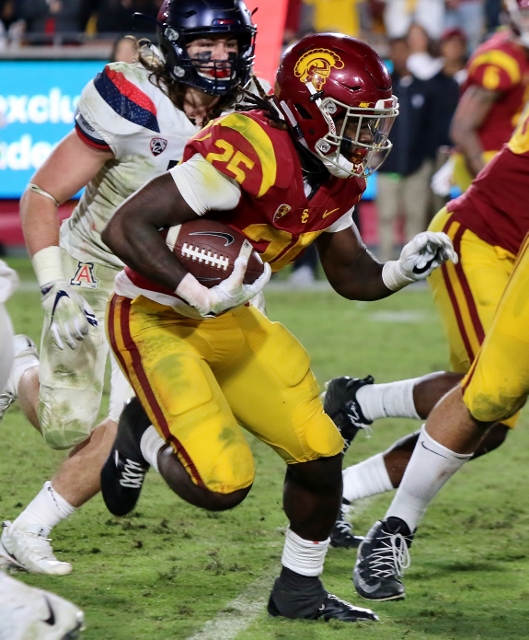 (Los Angeles) – Ronald Jones II rushed for 194 yards and three touchdowns to lead USC to a 49-35 win over Arizona Saturday night before 70, 225 at the Coliseum.

Arizona rallied from a three score deficit in the fourth quarter to tie it at 35 but the Trojan defense came up big forcing two turnovers and Jones scored twice in two minutes to put the game away. USC had over 300 yards on the ground overall as Aca’Cedric Ware also ran for 122 yards and a score. Sam Darnold threw for 311 yards and two touchdowns.

USC looked like it might turn it into a rout early as they jumped on the Wildcats in the first quarter.

Michael Pittman blocked a punt on Arizona’s first possession and Jalen Greene scooped it up and went 11 yards for the score to give USC a 7-0 lead.

The Trojans were denied twice on their next possession. Jones would have had well over 200 yards on the ground but he had a 98-yard touchdown run called back due to a holding penalty in the first quarter. USC then subsequently drove down to Arizona’s two-yard line where Darnold was intercepted in the end zone by Dane Cruikshank.

Early in the second quarter Arizona parlayed the interception into three points as Lucas Havriski booted a 45-yard field goal. 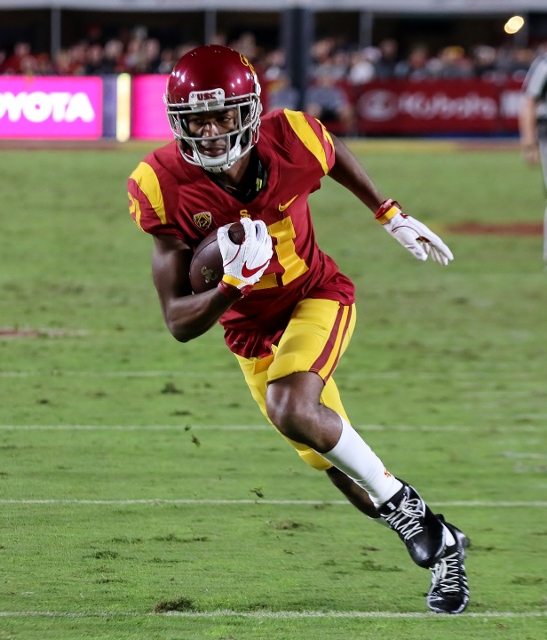 Tyler Vaughns gets loose for a score against Arizona. (Photo by Duane Barker)

Later in the quarter USC drove 67 yards on 11 plays to take a 14-3 lead. The drive included a fourth and one conversion on the Trojan 41 on a run by Stephen Carr and culminated with a 22-yard touchdown strike from Darnold to Tyler Vaughns.

After forcing another Arizona punt the Trojans struck again. Darnold hit his target Steven Mitchell who made a diving catch in the corner of the end zone for a 27-yard touchdown to make it 21-3.

A Chris Hawkins pass interference penalty in the end zone led to a 43-yard field goal for Havrisik for the Wildcats to cut the Trojans lead to 21-6 with 2:14 left in the first half.

USC took that 18 point advantage into the break.

In the second half the Trojans picked up where they left off as Jones capped a drive with a five-yard touchdown run. A 41-yard pass from Darnold to Deontay Burnett set up the score.

Arizona responded with a six-play, 75 yard drive that quarterback Khalil Tate finished with a 32-yard run through the USC secondary for the score.

The Trojans were stopped again and had to punt and Arizona took full advantage. The Wildcats marched 57 yards on just five plays. Tate scrambled out of the pocket and found a wide open Shun Brown for a 30-yard score to slice the lead to 28-20 with 1:17 left in the third quarter.

Early in the fourth quarter Ware broke off a 42-yard touchdown scamper to put USC back up by two scores at 35-20.

On the ensuing possession Arizona immediately answered. Tate got loose for a 54-yard run and then followed it up with a 16-yard scoring toss to J.J. Taylor to make it 35-27. The Cats needed just four plays to go 75-yards.

After stopping USC on the next series Arizona, set up on a short field, went 47 yards on four plays with Zach Green scoring from three yards out. The Wildcats then converted on a two-point conversion on a Tate pass to tie it at 35 with 8:23 remaining.

Then Jones took over. The Trojans marched 72 yards on seven plays as Jones finished it with a one-yard run for a seven point lead.

Ajene Harris intercepted Tate on the next set of downs. USC cashed in as Jones went to work again. First he rumbled 52 yards down to the one-yard line and on the next play he blasted into the end zone for the TD to put USC up 49-35 with 3:10 left.

Tate was picked off again on the next series as John Houston Jr. ripped the ball away and the Trojans got the ball back again.

For Arizona Tate threw for 161 yards and two touchdowns and ran for 161 and a score. Brown had eight catches for 78 yards and a touchdown. The Wildcat numbers may have been good enough to win most games but on this night Jones and the Trojan offense had too much.

(100164)
$172.00 (as of n/a - More infoProduct prices and availability are accurate as of the date/time indicated and are subject to change. Any price and availability information displayed on [relevant Amazon Site(s), as applicable] at the time of purchase will apply to the purchase of this product.)

(178062)
$49.99 (as of n/a - More infoProduct prices and availability are accurate as of the date/time indicated and are subject to change. Any price and availability information displayed on [relevant Amazon Site(s), as applicable] at the time of purchase will apply to the purchase of this product.)