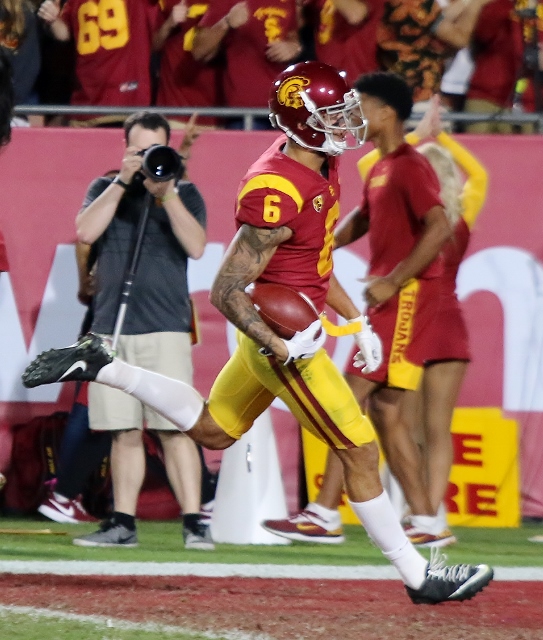 (Los Angeles) -USC jumped on top early and never trailed but ultimately had to hold on in a 28-23 win over UCLA Saturday night before 82, 407 at the LA Memorial Coliseum.

Michael Pittman got USC on the board first with a 70-yard punt return for a touchdown with 9:12 left in the first quarter.

UCLA got even on an 11-play, 80-yard drive that was capped by an 11-yard touchdown pass from Josh Rosen to Jordan Lasley.

On the ensuing drive USC marched 56 yards on six plays with Ronald Jones II finishing it with a two-yard touchdown run for a 14-7 lead.

UCLA had  a 21-yard touchdown run by Bolu Olorunfunmi called back due to a clipping penalty. JJ Molson then missed a 47-yard field goal early in the second quarter.

Later in the quarter Sam Darnold was intercepted by Jaleel Wadood for UCLA.

But the Bruins couldn’t take advantage as Rosen fumbled and the ball was recovered by John Houston for USC at the Trojans 40 with 37 seconds left in the half. USC moved the ball down to the 14 yard line on a pass to Deontay Burnett but instead of a field goal attempt they decided to run another play. On that next play Darnold was tackled at the five yard line as time ran out on the first half. 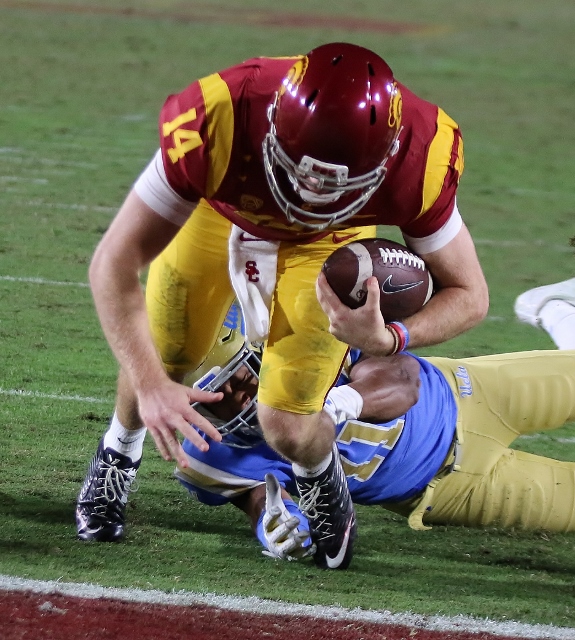 Sam Darnold dives across the goal line for a score. (Photo by Duane Barker)

UCLA turned it over in the red zone as Rosen was intercepted in the endzone by Marvell Tell with 10:29 left in the third quarter.

After a punt return put USC in good field position the Trojans drove five plays in 44 yards for a touchdown. Darnold did it himself going the final two yards for a score. A pass by Darnold to Stephen Carr down to the four yard line set up the score.

The Bruins immediately responded with a seven play, 79-yard drive. Rosen hit Lasley for nine – yard scoring strike to make it 21-14 with 2:59 left in the third. 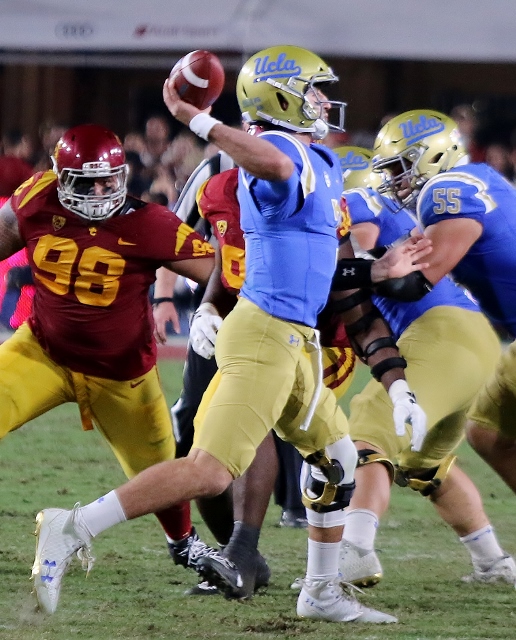 Josh Rosen threw for more than 400 yards against the Trojans. (Photo by Duane Barker)

The Trojans drove down into UCLA territory as the third quarter turned into the fourth but penalties and a sack pushed them back and they were forced to punt.

The Bruins drive stalled at the USC ten-yard line and Molson booted a 27 yard field goal for UCLA to cut the Trojans lead to 21-17 with 10:19 left.

The Bruins again had an answer though as they again moved down the field 79 yards on seven plays. Rosen threw a dime to Lasley in the corner of the endzone for nine yard touchdown with 2:43 left. UCLA then went for two but came up empty.

The Trojans were finally able to salt it away on the next series as they picked up a couple of first downs and ran out the clock for the victory. The win was the third straight for USC over UCLA.

Darnold completed  17 of 28 for 264 yards with no touchdowns and an interception. Darnold did have the one rushing touchdown. Jones rushed for 122 yards and two scores.

For UCLA Rosen had a huge night throwing for 421 yards and three touchdowns on 32 of 52 completions. Lasley hauled in 10 catches for 204 yards and all three scores. The Bruins couldn’t maintain a rushing game however managing just 80 yards on the ground.

Next up for UCLA (5-6) is a date with Cal next week as the Bruins attempt to get to .500 and to a bowl game. The Trojans improved to 10-2 and will play for the PAC 12 Championship.

(3822)
$10.79 (as of n/a - More infoProduct prices and availability are accurate as of the date/time indicated and are subject to change. Any price and availability information displayed on [relevant Amazon Site(s), as applicable] at the time of purchase will apply to the purchase of this product.)

(3841)
$39.99 (as of n/a - More infoProduct prices and availability are accurate as of the date/time indicated and are subject to change. Any price and availability information displayed on [relevant Amazon Site(s), as applicable] at the time of purchase will apply to the purchase of this product.)

$4.00 (as of n/a - More infoProduct prices and availability are accurate as of the date/time indicated and are subject to change. Any price and availability information displayed on [relevant Amazon Site(s), as applicable] at the time of purchase will apply to the purchase of this product.)
Posted in College | Tagged Bolo Olrunfunmi, Bolu Olorunfunmi, JJ Molson, Jordan Lasley, Josh Rosen, LA Coliseum, Marvell Tell, Michael Pittman, Ronald Jones II, Sam Darnold, Stephen Carr, UCLA Football, USC Football