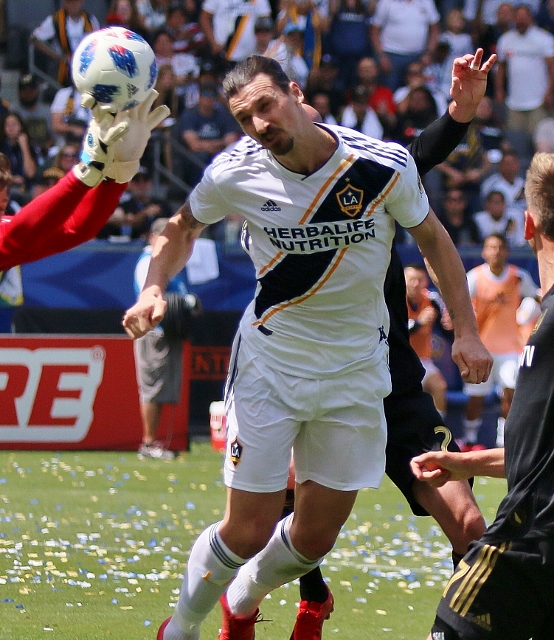 (Carson) – Zlatan Ibrahimovic scored two late goals, including one that will go down in history, to lead the Galaxy to a stunning come-from-behind 4-3 win over LAFC Saturday before a capacity crowd at Stubhub Center.

The Galaxy was down 2-0 at the half and 3-0 early in the third quarter before scoring the last four goals for the victory.

Ibrahimovic, who was just signed last week and was most recently with Manchester United, didn’t enter the contest until the 71st minute after the crowd repeatedly chanted “We want Zlatan.”

“They wanted Zlatan, and I gave them Zlatan,” Ibrahimovic said in the post game press conference. Wow, did he ever.

The Galaxy was down 3-1 when he entered and 3-2 after a Chris Pontius goal when he took a pass about 45 yards away from the goal. Noticing that LAFC goalkeeper Tyler Miller had slid out some and wasn’t online, Ibrahimovic, leaped up, extended his leg and booted a shot that sailed over the head of Miller and into the back of the net.  The goal which is sure to go down in history as one of the greatest ever, electrified the crowd as Ibrahimovic peeled off his shirt in celebration. Just like that it was tied at three in the 78th minute. 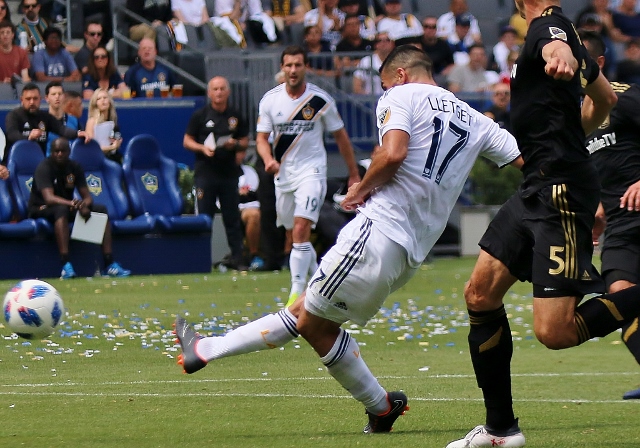 Sebastian Lletget got the Galaxy started with a goal early in the second half. (Photo by Duane Barker).

“I’m sure that goal will be a YouTube sensation,” said Galaxy Coach Sigi Schmid.

In the 90th minute as it appeared the game would end in a tie, Ashley Cole set a perfect pass to Ibrahimovic in front of the net, who headed it in for the game winner.

Early in the second half the Galaxy got back in the game to set the stage for Ibrahimovic. They were down 2-0 at half and then an own goal on a shot by Marco Urena that deflected off Galaxy defenseman Daniel Steres three minutes in made it 3-0 LAFC. Sebastian Lletget got the Galaxy on the board when he fired one by Miller in the 61st minute.

Four minutes later Ola Kamara just missed  a goal when he shot one high over the crossbar.

Three minutes after Ibrahimovic came in, in the 74th minute, Chris Pontius converted a nifty pass from Emmanuel Boateng on the right side into a goal to make it 3-2.

In the first half it was all LAFC. Bob Bradley’s crew outshot the Galaxy 10-3 which included 5-0 in shots on target. Three minutes into the contest Latif Blessing had on opportunity but his attempt was halted by David Bingham. Two minutes later Carlos Vela didn’t miss as he curled one in high in the corner to make it 1-0.

Vela, who would have been the story of the game if not for a man named Zlatan, got his second goal of the day in the 27th minute. He hit the crossbar and then the ball dropped down behind Bingham and beyond the line for a 2-0 advantage.

The own goal that made it 3-0 early in the second half seemed to be the death knell for the Galaxy but we hadn’t seen Ibrahimovic yet.

“I thought our fight and determination was good. The fight and for the team to come back and to win this game 4-3 is incredible. For the fans and for this game to be on national TV, how you cannot love this game is beyond me,” Schmid said.

For Ibrahimovic it was a great way to start with his new team. “I’m still hungry. It was a good start and I mean losing 3-0 is not a good result obviously, especially on our home field, but when we got that first goal we kept going and then we got the second, third and fourth so the team spirit showed,” he said. “I’ve only been here two days but from what I’ve seen I’m super happy. If you look back every team I came to in the first official game I scored, so I said I will not let it down today.” And he didn’t in dramatic fashion.

With the victory the Galaxy improved to 2-1-1 while it was the first loss for LAFC which fell to 2-1.

It appeared that LAFC was in complete control and on its way to a third consecutive win in its inaugural season. And then it happened. What happened? Zlatan happened.