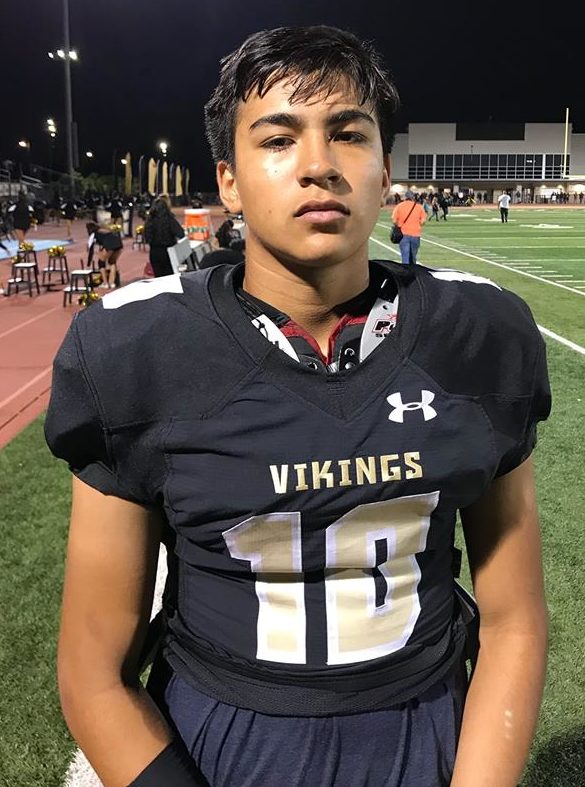 After penalties stalled Northview’s opening drive and its defense forced a fumble on West Covina’s first possession, the Vikings quickly drove down the field to score the games first touchdown. Jimenez found Deshon Thompson, who was running the bubble screen and took it the distance for the score.

The Bulldogs punched right back on their ensuing possession. After a big return that set West Co up on Northview’s side of the field, tailback Andrew Rodriguez took the handoff and scampered his way to the end zone from 31 yards outs. Unfortunately, the point after attempt was missed but the Bulldogs trailed 7-6 with 1:44 left in the first quarter.

The Vikings wasted no time taking back the lead. Following a big return of their own to set the offense up at the West Covina 45, David Barela carried the load to help set up Jimenez’s quarterback keeper for the team’s second touchdown.

Just before intermission,  Brian Calderon booted a 35-yard field goal to give the Vikings a 17-6 lead.

Following the break, Jimenz and the Northview offense didn’t slow down. As a unit, they scored on all five of their second-half possessions. Jimenez hooked up with Jamier Johnson on the back corner fade route for a 19-yard touchdown to start the third quarter.

He then found Thompson again running a curl route and he took it 56 yards to the house. He added his third touchdown pass of the half when he connected with Martin Gutierez in the corner of the end zone. The Vikings took a commanding 38-6 lead with 5:18 left in the third quarter.

With the Northview offense making scoring easy, their defense made the Bulldogs’ night unbearable. After the touchdown drive in the first quarter, the offense couldn’t repeat the same ball movement. Both Silas Bravo and Victor Flores couldn’t generate positive yards. It didn’t help that they were sacked at least once on every possession in the second half forcing them to punt on four consecutive drives.

Northview added insurance in the fourth quarter when Barela punched in the rushing score and backup quarterback Justin Gaytan added another rushing score in garbage time.

“Today was great, nothing really stopped us,” said Jimenez after the game. “Everyone is always doubting us and we’re just going to play.

Northview HC Marcel Perez was not on the sideline due to a suspension from last weeks game against San Marino.

The Vikings travel to Don Lugo next Friday night.