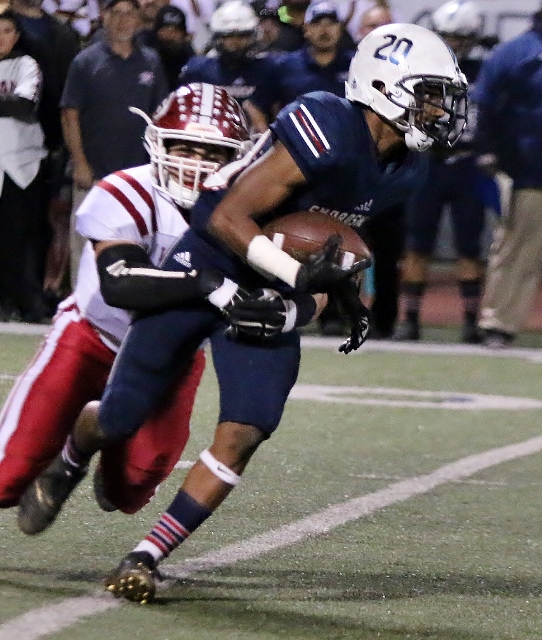 It took Trenell Ridgley and the Swordsmen the full 48 minutes to get by La Serna.

(Santa Fe Springs) The La Serna Lancers traveled to St. Paul Friday night for a quarterfinal match in the CIF Division V playoffs. The two teams battled for 48 minutes and traded the lead four times before Swordman Angel Garcia picked off an Andrew Henriquez pass at the St. Paul five as time expired preserving the 34-30 victory.

La Serna got on the board first with just under eight minutes left in the opening frame. A Trenell Ridgley fumble was recovered by the Lancers at the St. Paul 15. Two plays later Luke Perez got the call and scored on a six yard run. Chandler McCaffer added the extra point for the 7-0 lead.

The Swordsmen responded with a scoring drive of their own. A seven play 53-yard drive was capped by Ridgley making up for his earlier miscue with a 17-yard touchdown run. Miles Mena booted through the point after to knot the game at seven.

Early in the second quarter the Lancers finished off an eight play 80-yard drive with Robert Ruiz punching the ball across the goal line from five yards away.

St. Paul set up La Serna with great field position a few minutes later. Facing a fourth-and-one at their own 32, the Swordsmen took a chance and tried to make the line to gain. The Lancer defense stuffed the ball carrier for no gain.

Five plays later, Nikolas Otero got his first score of the evening on a seven yard run. With McCaffers extra point, La Serna had a two score advantage.

St. Paul only needed four plays to cut the Lancer advantage back to seven. Connor Genal found Garcia over the middle from 34-yards out. Mena once again added the extra point. 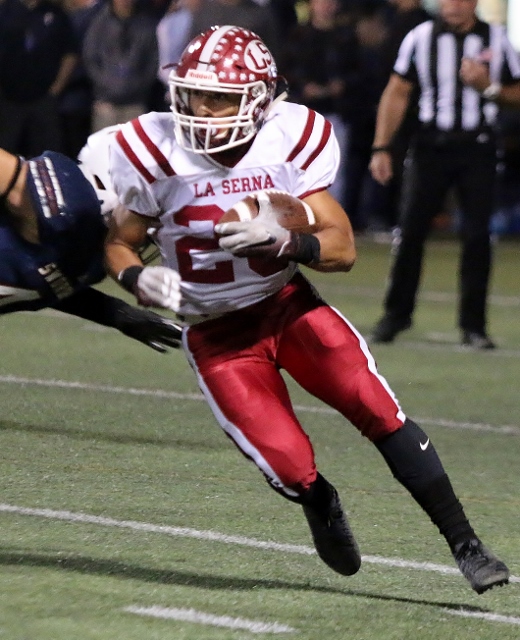 Coming into the season of giving, La Serna gave back the gift of good field position going for it on fourth-and-six at the St. Paul 48. Henriquez pass was batted down the line of scrimmage and the Swordsmen took over on downs.

Three plays later Genal found Justin Jackson in the corner of the endzone to cap a three-play 52-yard drive. With Mena’s extra point St. Paul was back even at 21 with a little more than four minutes left in the first half.

The Swordsmen got their first lead of the evening with 4:30 left in the third. Que Allen got the call from four yards away. A personal foul call turned the extra point into a 35-yard attempt and Mena’s booted sailed wide left.

After a La Serna punt pinned the St. Paul deep in their own territory at the eight, the Swordsmen were forced to punt after loosing seven of those eight yards on three plays. Instead of risking a blocked punt, the St. Paul long snapper appreared to intentionally snap the ball high and out of the endzone for the safety.

La Serna could not take advantage of decent field position and were forced to punt the ball back to St. Paul who graciously punted the ball back after failing to gain any traction.

Midway through the final frame the Lancers went on an eight play march to take back the lead that was finished with Otero’s second taste of paydirt. With McCaffers extra point, La Serna took a three point lead.

St. Paul responded to the Lancer score with an eight play 75-yard drive of their own. Genal found Garcia again over the middle this time from 22-yards out to give the lead back to the Swordsmen.

La Serna did get the ball two more times late in the game. One of the drives ended with an interception by Andrew Suarez and the other with the Garcia pick as time ran out.

St. Paul will now take on Lawndale in one of the semi-finals of the CIF Division V playoffs.