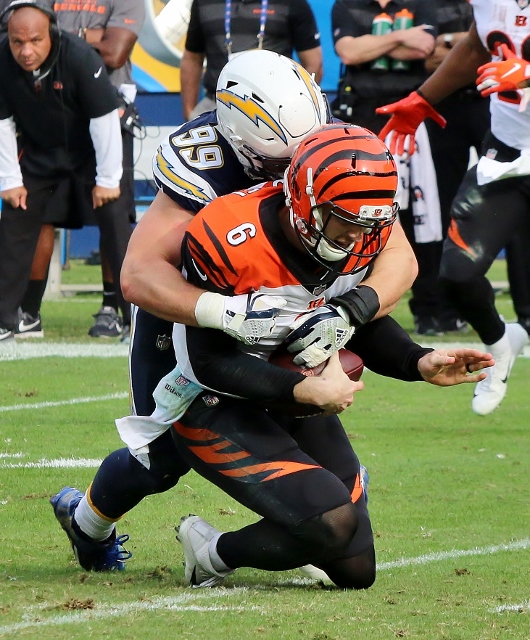 Joey Bosa and the defense were key in the Charger’s victory. (Photo by Duane Barker)

(Carson) – The Chargers scored on their first possession and led the rest of the way in a 26-21 win over Cincinnati Sunday at StubHub Center.
The Chargers marched 75 yards on six plays on the opening possession. Philip Rivers hit Keenan Allen on a 14-yard touchdown pass to put LA up 7-0.

Cincinnati responded with a 47-yard field goal by Randy Bullock after its drive stalled at the Charger 30.

The Chargers then mounted a 13-play, 75 yard drive on their next possession to go up 14-3 early in the second quarter. Austin Ekeler bulled in from five yards out for the score. 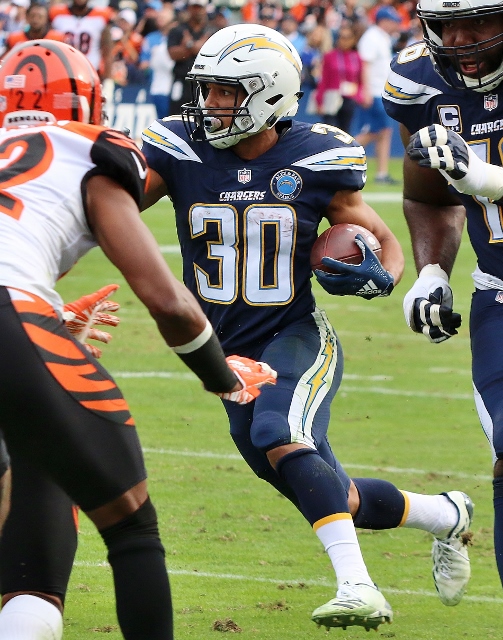 Austin Ekeler gets a score getting the start for the Chargers. (Photo by Duane Barker)

After a short Charger punt the Bengals cashed in with a 23-yard field goal by Bullock with 5:01 left in the second quarter. Cincinnati appeared to have scored on the previous play but quarterback Jeff Driskell was ruled short of the goal line on a one yard run. After a false start penalty, the Bengals settled for three.

The Chargers were forced to punt from their own endzone after a penalty and a sack and the Bengals set up shop at the LA 35. They took advantage of the short field when after a 14 yard run by Joe Mixon, Driskell connected with John Ross on a six-yard scoring strike to cut the Charger lead to 14-12. A two point conversion pass attempt failed.

The Chargers got the ball back with 20 seconds left and moved the ball down the field just far enough for Michael Badgley to boot a 59-yard field goal as time expired in the first half to make it 17-12. 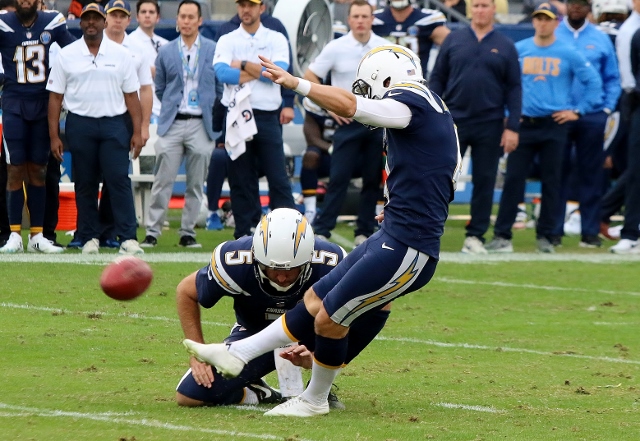 The Bengals elected to go for it on fourth and less than a yard on their own 35 on their first series of the third quarter but Mixon was stopped for no gain and the Chargers took over. However they were halted at the Cincinnati 13-yard line and Badgley kicked a 31-yard field goal with 7:38 left.

Cincinnati put together a 79-yard drive, aided by a couple of Charger penalties, that Mixon finished with a one-yard run. Driskel was sacked on the two point conversion attempt allowing the Chargers to maintain a 23-21 lead with 1:50 left on the clock.

The Chargers recovered the onside kick at the Bengal 34. Three plays later Badgley booted his fourth field goal of the day, this one from 41 yards out, to make it 26-21 with 49 seconds left.

LA then held Cincinnati and the clock ran out.

“It was a good team win. The special teams stepped up and Michael (Badgley) was good on field goals,” said Chargers head coach Anthony Lynn. “On defense we stopped them when we needed to. It was a tough win. We showed a lot of grit.”

The Chargers improved to 10-3 with the victory while Cincinnati fell to 5-8.