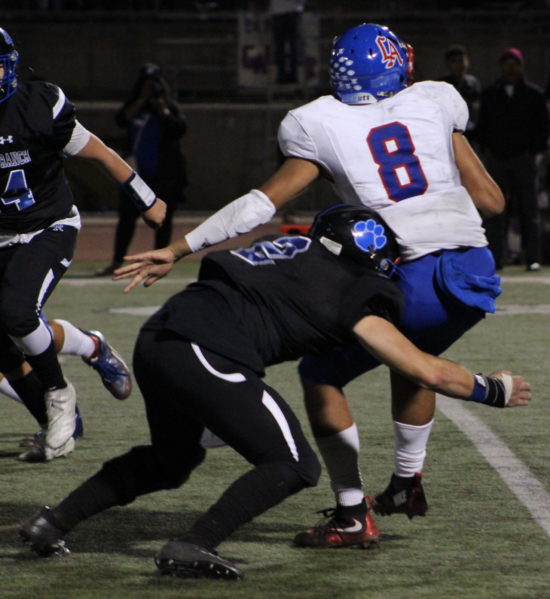 The Diamond Ranch D stuck it to Los Altos all night.

(Pomona) – The Diamond Ranch defense shut out Los Altos in the second half and the Panthers rallied to beat the visiting Conquerors 21-14 Friday night in a Hacienda League contest.

The Panthers were down 14-7 at the half but scored once in the third quarter and once in the fourth to take the lead. After forcing Los Altos to punt with four minutes left Diamond Ranch chewed up rest the clock to put it away.

Tied at 14 in the fourth quarter the Diamond Ranch defense made a play to set up what proved to be the game winning score. Los Altos quarterback David Hacegaba’s pass was tipped and scooped out of the air by middle linebacker Elijah Schimer at the Conqueror 39. four plays later Cade Miller connected with Andrew Martinez for a 23-yard touchdown strike over the middle to make it 21-14 with 6:42 left.

The Panthers then stopped Los Altos, got the ball back and never gave it up.

It was the Los Altos defense that made some noise early for the first score of the game. On the Panthers second possession they coughed up the football, and Benjamin Aguilar scooped it up and rumbled 30 yards for the score. 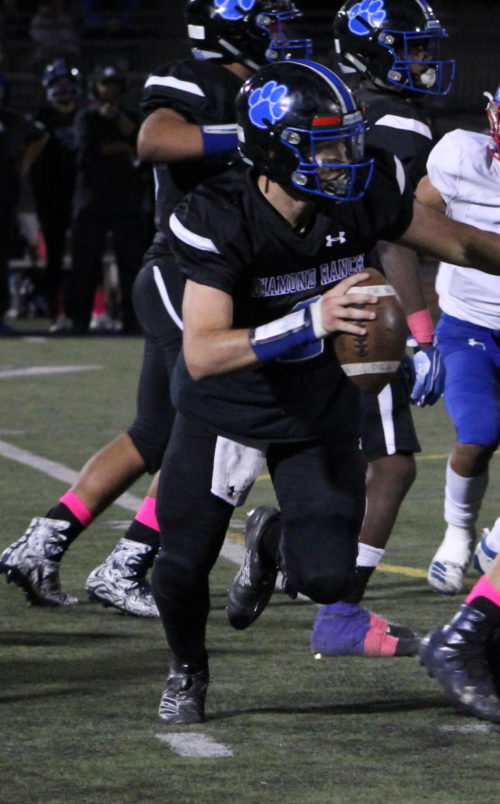 It was still 7-0 late in the second quarter when Diamond Ranch finally got on the board. Hunter Clark capped a 45-yard drive with a six-yard run to even it up.

Los Altos immediately responded on the ensuing kickoff with a little trickery. Zecheriah Rodriguez fielded the punt, and then threw the ball across the field to Rene Zaldivar. Zaldivar caught the toss, broke a couple of tackles and went 80 yards for a touchdown to put the Conqs back on top 14-7 with 1:33 left in the half.

Los Altos took that lead into the break.

Diamond Ranch tied it with just over five minutes left in the third when Cade Miller hit Luis Guerrero in stride down the right sideline for a 58 yard touchdown. Guerrero ran right by the Los Altos secondary.

In the fourth D Ranch converted the Los Altos turnover into six points and ultimately the victory.
Miller ran for 58 yards and threw for 91 yards and two touchdowns. Clark had 16 carries for 111 yards and a score.

The defense was the big story however for the Panthers as they held Los Altos out of the endzone as the Conquerors only scores came on a return of a fumble recovery and a kick off return. Diamond Ranch held Los Altos to just 109 total yards.