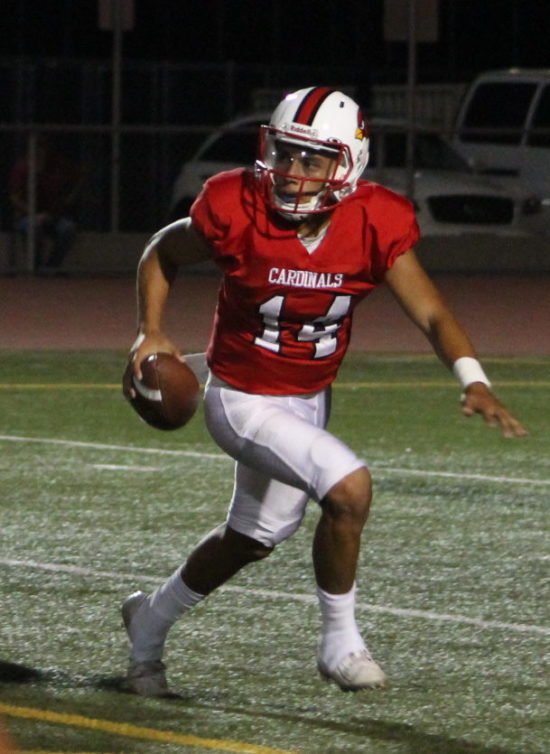 JC Lopez and the Whittier Cardinals need a win over Cal to stay in the Del Rio race.

Valle Vista
San Dimas (5-2) at Covina (3-4) (Covina District Field)
Last Year: San Dimas 63-34
This game has the look of last year’s contest. San Dimas already has a lock on the Valle Vista with a win over Northview last week while Covina seems to be going in the opposite direction. The Colts got beat by three touchdowns last week by Rowland. San Dimas gets started early and never looks back. It could be over by halftime.

Almont
Alhambra (7-0) at San Gabriel (3-4)
Last Year: Alhambra 48-0
Alhambra’s big test was last week and the Moors passed with flying colors with a comeback win over Montebello. After also taking care of Schurr the previous week, the Moors have the inside track to the Almont League title. They aren’t about to let San Gabriel get in their way. Alhambra rolls.

Schurr (3-4) at Montebello (1-6)
Last Year: Montebello 27-23
This one is always good because of the rivalry. The schools are only about 9-iron away from each other. Montebello fell by a touchdown to Alhambra in a shootout last week while Schurr was blitzed by the Moors giving up 69 points two weeks ago. Both teams are still battling for a playoff spot and win would go a long way in determining the second place team. Schurr’s defense has been suspect all year and will have trouble stopping the Oilers. Montebello simply outscores the Spartans in the end.

Del Rio
Whittier (3-4) at California (5-3)
Last Year: Whittier 49-27
Both teams need a victory in this one to improve their position in the Del Rio and make a run at a playoff spot. It looks like the battle for third place. Whittier has had some nice wins this year. The Cards beat San Dimas 35-28 and dropped 55 and 70 on Schurr and Westminster respectively. The Condors started fast but have lost three of their last four games. Expect a close game that may not be decided until late in the fourth quarter. Whittier gets the W.

Palomares
Colony (2-5) at Ayala (7-0)
Last Year: Colony 27-22
Ayala proved its mettle last week with a huge win over Glendora. Colony is the type of team that if overlooked the Titans could step up and bite you. That being said if the Bulldogs were going to stumble it would have been last week against the Tartans. With the Palomares League crown in sight, Ayala isn’t about to fall now. Bulldogs remain unbeaten.

Mission Valley
South El Monte (3-4) at Arroyo (3-4)
Last Year: Arroyo 17-10
South El Monte looked dead in the water until rising up to beat Rosemead last week. The Eagles vaulted themselves right back into the playoff hunt. This could be for second place in the MVL. Arroyo stayed with El Monte last week and needs a win to get back on track. Neither team is where they want to be but a win would give them back momentum. Which South El Monte team will show up? The same question could be asked of Arroyo which has had an up an down year. Should be even through the first three quarters with Arroyo emerging victorious in the end. Knights win it in fourth.

Rio Hondo
La Canada (5-2) at San Marino (2-6)
Last Year: San Marino 49-0
With Monrovia clearly the class of the Rio Hondo this game is for second place. La Canada is coming off of a 56-42 win over Temple City two weeks ago while San Marino beat South Pasadena 10-7 last week. The Titans do have a league loss but that was against Monrovia. The Spartans defense has been susceptible at times but can San Marino take advantage? 10 points in the win over South Pas was the most points scored in a game by the Titans all year. La Canada’s defense just does enough and holds on and the Spartans move into a first place tie in the Rio Hondo…until they meet Monrovia next week.

San Gabriel Valley
Paramount (6-1) at Warren (5-2)
Last Year: Paramount 24-21
Both teams are 2-0 in the SGV with the winner set to take control. Paramount looks dominant right now after a 48-22 win last week over Downey. The Pirates have lost just once all year – a 28-27 overtime loss to Bishop Amat back in August. Warren has had a couple of bad losses including a 50-6 rout by La Serna three weeks ago. Paramount has been up to every challenge so far this year. This will be n different. Warren will be lucky to keep it close. Paramount wins going away.