Freshman Kenan Christon scored twice for the Trojans in the second half. (Photo by Duane Barker).

By Tim Peterson
(Los Angeles) – USC shut out Arizona for three quarters and rolled to a 41-14 win over Arizona Saturday before 53,826 at the Coliseum.

The Trojans led 17-0 at the half and 24-0 at the end of three before Arizona picked up a couple of late touchdowns.

In the first quarter USC took advantage when Arizona muffed a punt return allowing the Trojans to recover and take over at the Arizona 21. Three plays later Chase McGrath booted a 31-yard field goal with 8:02 left in the first quarter for a 3-0 Trojan lead.

The Wildcats turned it over again later in the first quarter on a fumble and John Houston Jr. recovered it at the Arizona 34. The Trojans cashed in five plays later on a nine-yard touchdown pass from Kedon Sovis to Michael Pittman Jr. just before the end of the first quarter.

The Trojans marched 87 yards on 10 plays with Markese Stepp capping the drive with a 12-yard touchdown run with 1:07 left in the second quarter to make it 17-0. USC took the 17 point lead into the half.

Markese Stepp had a 12-yard TD run in the second quarter. (Photo by Duane Barker).

In the third quarter USC drove down to the Arizona 17 yard line but fumbled it away and the Wildcats took over. However Kana’i Mauga intercepted Arizona quarterback Khalil Tate and after an unsportsmanlike conduct penalty the Trojans were in business again at the Arizona 28. USC wasn’t able to find the endzone but McGrath booted a 38-yard field goal for a 20-0 advantage.

Slovis hit Pittman for a pass down to the Arizona six yard line later in the quarter. On third down Slovis found Tyler Vaughns in the endzone for a five-yard TD strike with 3:29 left in the third.

Arizona had a chance to get on the board early in the fourth quarter but Lucas Havrisik missed a 50-yard field goal attempt.

On the next possession freshman Kenan Christon broke off a 55-yard touchdown scamper and the Trojans were in cruise control 34-0 with 13:13 left in the fourth quarter.

The Wildcats finally responded with some points on the next series when Grant Gunnell, who replaced a Tate in the third quarter, hit Charter Oak’s own Brian Casteel for a 56-yard touchdown to make it 34-7.

Christon got loose again on the next series and outran the Arizona secondary for a 30-yard touchdown sprint.

Casteel hauled in another touchdown pass with just 1:48 left in the fourth on a 30-yard pass from Gunnell for the last score of the night. 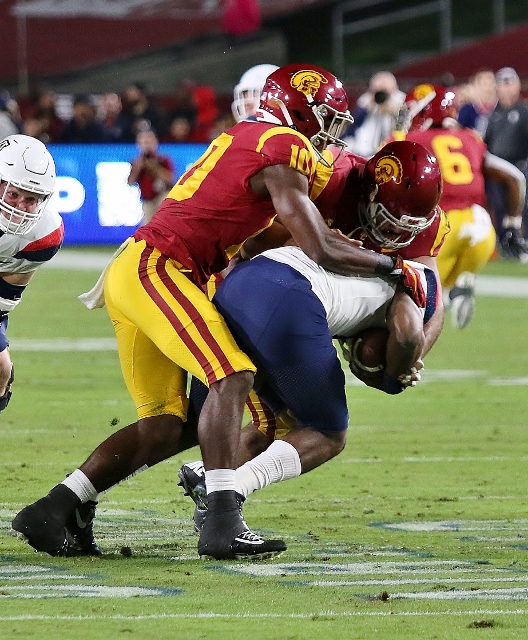 Castell finished with four catches for 101 yards and the two scores for Arizona. Gunnell came off the bench to complete 16 of 26 for 196 yards and two touchdowns with an interception.

For the Trojans, Slovis was 19 of 28 for 232 yards and two touchdowns. Christon had eight carries for 103 yards and the two big touchdown runs. Pittman had four receptions for 69 yards and a score and Vaughns had seven for 73. Stepp had 13 carries for 66 yards and a touchdown before leaving with an ankle injury.