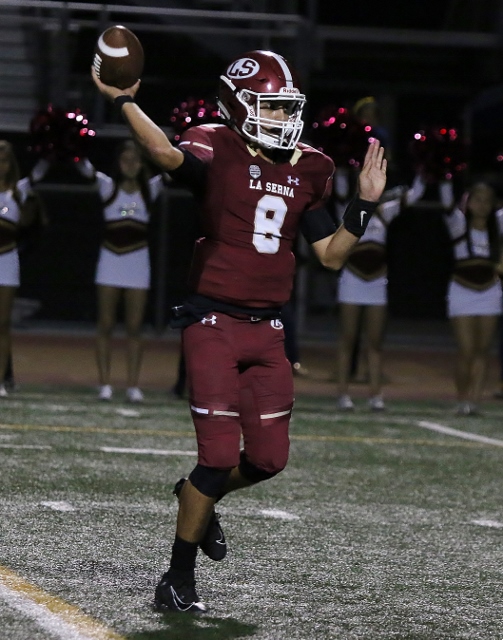 Andrew Henriquez leads the Lancers to a first round playoff win.

Our “One Year Ago” series moves on to the first round of the playoffs from last season. Duane Barker was on hand to cover La Serna’s opening round Division VI win over Warren that was played on November 8, 2019.

By Duane Barker
(Whittier)  The La Serna Lancers took on the Warren Bears Friday in the first round of the CIF Division VI playoffs and trounced the visitors to the tune of 56-29. The Lancers also defeated the Bears earlier this season 50-6.

Warren may have been feeling a little bit of the hangover from last Friday’s big comeback win over Downey as they allowed La Serna to take the opening possession of the game 64-yards on 10 plays for a score. Aaron Young got his first touchdown of the night on a one yard run to cap off the drive. Andrew Henriquez found Chandler McCaffer for the two point conversion and the 8-0 lead.

The Bears looked to get a touchdown of their own and drove deep in to Lancer territory. Faced with a fourth and goal at the La Serna three, Warren head coach Kevin Pearson decided to go for it but the Bears came up short when Dylan Guerra’s pass was knocked down at the line of scrimmage.

Warren didn’t come out empty handed as on the very next play the Bears tackled Steven Pinales in the endzone for the safety.

The score remained 8-2 until early  in the second quarter. The Lancer defense forced and recovered a fumble at their own 23 and proceeded to march down the field 77-yards. Milo Lopez from 20-yards away to complete the drive. McCaffer added the extra point for the 15-2 advantage.

Five minutes later La Serna found paydirt again this time on a 9-yard run by McCaffer. McCaffer completed the scoring on that drive as will with another extra point.

The score remained 22-2 until early in the third period when the Bear’s Kyle Miller took the opening kick off of the second half 85-yards for the score. The point after was blocked by Blake Clay and Warren still trailed 22-8.

Warren managed to cut the lead to seven points with a few minutes later in the third quarter when Guerra found Keison Evans from 15-yards out.

Both teams scored again on back to back possessions to bring the score to 29-21 with the Lancers maintaining their advantage.

La Serna began to pull away late in the third quarter. Young got his second score on a 16 yard run and and just a few seconds later on the Bears next play from scrimmage Jersey Johnson picked off Guerra and returned it 26 yards for the touchdown.

It was a mixed bag of success and struggle for Guerra who amassed 346-yards of total offense, 236 passing and 110 on the ground with three total touchdowns and the costly interception. Guerra was also sacked six times and pressured many more by the La Serna defense.

The fourth quarter was more of the same for the Lancers as they put up two more scores on a 23-yard run by Lopez and four yard run by Clay to light the scoreboard to 56-21.

Guerra provided the final highlight of the night and the season for the Bears with :05 left in the game. Guerra was forced out of the pocket and weaved his way through the La Serna defense 55-yards for the touchdown.

La Serna will advance to face Los Altos next Friday in the second round.

(9747)
$16.99 (as of September 21, 2021 20:51 GMT -07:00 - More infoProduct prices and availability are accurate as of the date/time indicated and are subject to change. Any price and availability information displayed on [relevant Amazon Site(s), as applicable] at the time of purchase will apply to the purchase of this product.)

(24918)
$204.99 (as of September 21, 2021 20:46 GMT -07:00 - More infoProduct prices and availability are accurate as of the date/time indicated and are subject to change. Any price and availability information displayed on [relevant Amazon Site(s), as applicable] at the time of purchase will apply to the purchase of this product.)

$54.99 (as of September 21, 2021 20:47 GMT -07:00 - More infoProduct prices and availability are accurate as of the date/time indicated and are subject to change. Any price and availability information displayed on [relevant Amazon Site(s), as applicable] at the time of purchase will apply to the purchase of this product.)
Posted in High School Football, High School Sports

2 Comments to "One Year Ago: Lancers Tame the Bears In Round One"