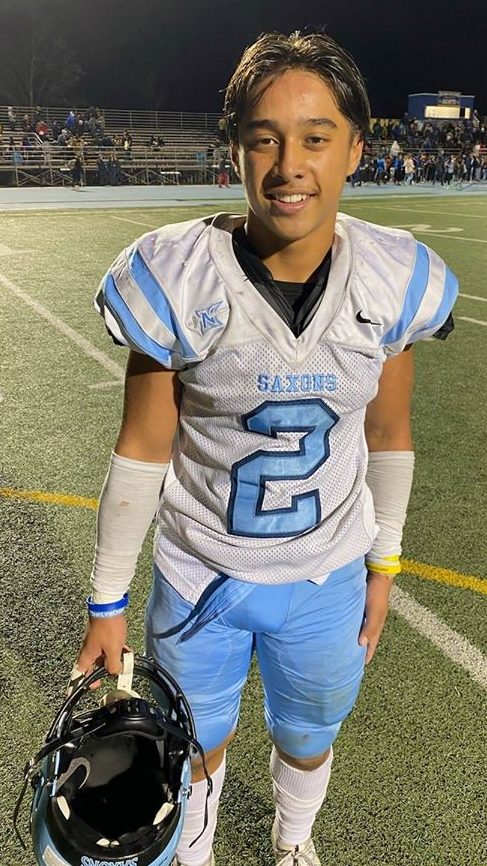 Joey McCormack’s interception late in the fourth quarter sealed the win for North.

By Alex Gonzalez
San Dimas— With 42-seconds left in regulation, North defensive back Joey McCormack sent the visiting Saxons to the Division 9 final when he picked off Ryan Bulick’s pass, sealing the win 14-0 win over San Dimas in the CIF Division 9 semi finals.

“I saw him come across my zone, I read it and picked it,” said McCormack after the game. “We came this far last year, and we didn’t make it to the Finals. This year, we got it. Two of our starting seniors are injured. They are major factors for us, and it just feels good playing for them.”

Not only was McCormack effective on defense, but he was also responsible for the team’s second rushing touchdown at the start of the fourth quarter. The score capped a 20-play drive that started on their own 10-yard line that resulted in McCormack to walk into the end zone untouched.

The touchdown came after the North defense forced Saint running back Jaccob Buccola to fumble just before he was trying to reach the end zone. It was the Saints only chance to score points as they had difficulty moving the ball throughout the contest.

It also didn’t help how the team only had three possessions as the second half played out. In fact, before Buccola’s fumble, that was the deepest that San Dimas got the entire game. The offense was forced to punt all but thee times in the game. Those three other times was the fumble and interceptions that halted drives.

At first, both teams couldn’t gain any momentum when the game started. Each possession would either end in a punt or a turnover. Neither team could sniff the end zone until the Saxons broke the scoreless ball game with less than a minute to play in the first half.

The Saxons first-half touchdown came from quarterback Trevor Ke’ enam Lagarde when his 33-yard bomb connected with Stephen Bradford to break the 0-0 tie with 43-seconds remaining in the frame.

The win sets up a match up for North with the Highland Bulldogs next Friday night for Division 9 CIF title. San Dimas finishes the season 11-2.

2 Comments to "Saints Silenced in Semis"