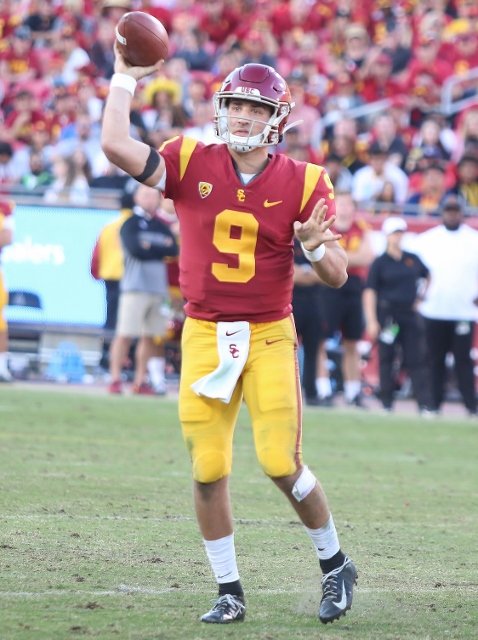 By Tim Peterson
(Los Angeles) – Kedon Slovis threw for a school record 515 yards to lead USC to a 52-35 win over UCLA Saturday before 64,156 at the LA Memorial Coliseum.

The previous record for single game yards was held by Matt Barkley who had 493 against Arizona in October 2012.

Slovis, a true freshman, also threw four touchdown passes without an interception and completed 37 of 47 on the day. The Trojans racked up 643 yards overall and needed almost all of them to hold off UCLA.

The Bruins, behind sophomore quarterback Dorian Thompson-Robinson, piled up 540 total yards of their own and didn’t go down until late in the fourth quarter. Thompson-Robinson completed 26 of 44 for 367 yards and three touchdowns with one interception.

The Bruns actually got on the board first but USC took the lead for good early in the second quarter and never relinquished it.

UCLA took advantage of a running into the kicker penalty on its first possession to go 83 yards on nine plays. Thompson-Robinson hit Demetric Felton on a nine-yard touchdown pass for a 7-0 lead.

Later in the first quarter Chase McGrath booted a 31-yard field goal for the Trojans first points of the game to make it 7-3.

Amon-Ra St. Brown then muffed a punt and Johnny Den Bleyker fell on it for UCLA at the USC 32. But the Bruins couldn’t take advantage as Thompson-Robinson was picked off by Isaac Taylor-Stuart and the Trojans took over at their own 17.

From there the Trojans drove 83 yards on five plays with Vavae Malepeai going in from one-yard out. Slovis hit Drake London down to the one on a long pass play to set up the score and a 10-7 lead.

Early in the second quarter a 23-yard run by Kazmier Allen set up a three-yard touchdown scamper by Thompson-Robinson to give UCLA a 14-10 lead with 13:16 left in the first half. The Bruins drove 75 yards on nine plays.

USC answered wth a 10-play, 75 yard march of its own with Slovis connecting with Michael Pittman Jr. for a one-yard score to give the Trojans a 17-14 lead. 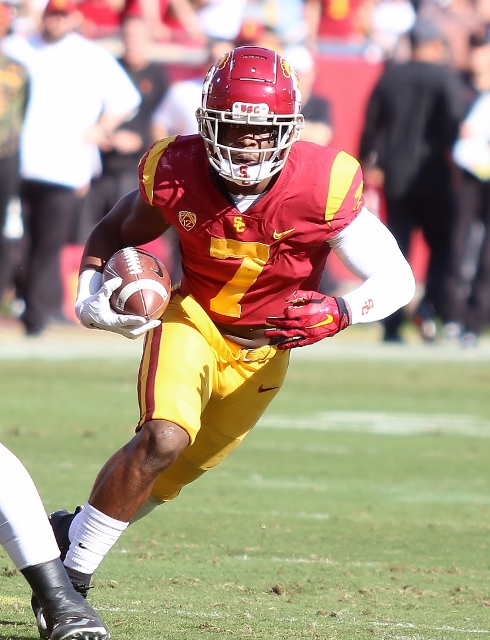 After J.J. Molson missed a 54-yard field goal attempt for UCLA, USC marched 64 yards on 8 plays with Slovis and Pittman Jr. again connecting on a 4-yard TD with 2:06 left in the first half.

Slovis was 19 of 24 for 250 yards and two touchdowns and Pittman had nine catches for 70 yards and two scores at the half for USC. Thompson-Robinson was 14 of 22 for 165 and an interception for UCLA.

USC opened the second half with a 5-play 75 yard drive. Slovis fired a 32-yard touchdown pass to London for six to put the Trojans up 31-14.

On the Trojans next series Slovis took a hard shot and had to leave the game. He was replaced by Matt Fink but on the next play Malepeai scored on an 8 yard run to cap a 88 yard drive and the rout was on at 38-14 Trojans.

But the Bruins responded with a big play. Thompson-Robisnon hit Devin Asiai over the middle and he found daylight with a 53-yard catch and carry for a touchdown to make it 38-21.

Slovis returned for the Trojans on the next series.

It didn’t take UCLA long to get back in it. On their next possession the Bruins moved down the field 73 yards on 8 plays with Thompson-Robinson hittng Chase Cota with 1:54 left in the third quarter to cut the USC advantage to 38-28.

On the first play of the fourth quarter Slovis threw his fourth touchdown pass of the afternoon – a 49 yard strike to Tyler Vaughns to put USC back up by 17, 45-28.

UCLA refused to go away however and they immediately came back with a 74 yard march that was capped by a one-yard TD run by Joshua Kelley.

Stephen Carr found paydirt on a two-yard run to put the Trojans up 52-35 with 8:39 left in the fourth quarter. The Trojans used 9 plays to go 75 yards in what proved to be the dagger.

For UCLA Thompson-Robinson was also the leading rusher with 64 yards and a score. Asiasi caught 5 passes for 141 yards and a touchdown and Kyle Philips had 12 receptions for 123 yards.

For the Trojans London was the leading receiver with 142 yards and a touchdown on 8 catches. St. Brown had 8 for 128, Vaughns 6 for 106 yards and a score and Pittman hauled in 13 passes for 104 yards and a pair of TDs as USC had four receivers with over 100 yards for the first time in school history.

Carr led the team on the ground with 87 yards.