Our “One Year Ago” series moves on to the CIF Finals. Sierra Canyon once again reigned supreme raising the Division II trophy with a win over Chaminade. Duane Barker was there for the coverage on November 29, 2019.

(West Hills) – On a cold night on the west side, the Sierra Canyon Trailblazers paid a visit to the Chaminade Eagles Friday night in the CIF Division II Finals and physically dominated their hosts to the tune of 35-7 and were crowned the DII Champs.

The win makes it back-to-back titles for Sierra Canyon who knocked off Cajon last year for the Division III title. Last year’s championship earned the Trailblazers a bump to Division II and head coach Jon Ellinghouse and staff were ready for the challenge.

In the first half the Trailblazers only had three possessions but they were the epitome of efficiency as they scored on all three of those possessions.

After holding the Eagles scoreless on the opening drive of the game, Sierra Canyon marched down to the Chaminade 16 on 13 plays. When the drive stalled Josh Bryan came on to boot a 33-yard field goal.

The Eagles answered the score with one of their own early in the second quarter taking the ensuing drive 70-yards on seven plays. Quarterback Jayden Henderson connected with Ian Duarte who had gotten behind the Trailblazer defenders for a 31-yard score. Chase Meyer added the extra point for the 7-3 lead. It was only lead Chaminade would have on the night. 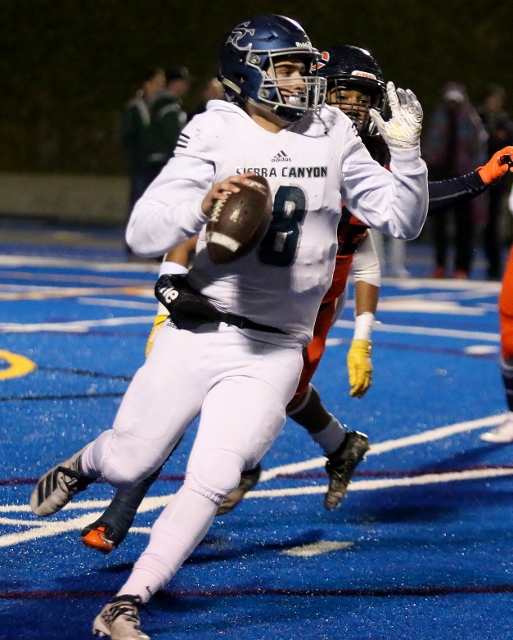 At the helm of the Sierra Canyon offense was Chayden Perry who guided his team on a touchdown drive to retake the lead. Perry found Donovan Williams from 10-yards out and with Bryan’s extra point, the Trailblazers were back on top 10-7.

DJ Harvey provided some lightning on the cool evening when with under three minutes left in the first half, Harvey fielded a Chaminade punt at his own 20 and worked his way through the defenders en route to a punt return for a score.

Down 10, the Eagles mounted a into Trailblazer territory only to be turned away on fourth and two. Henderson, under duress from the Sierra Canyon defense, fired a ball toward the endzone that fell incomplete. 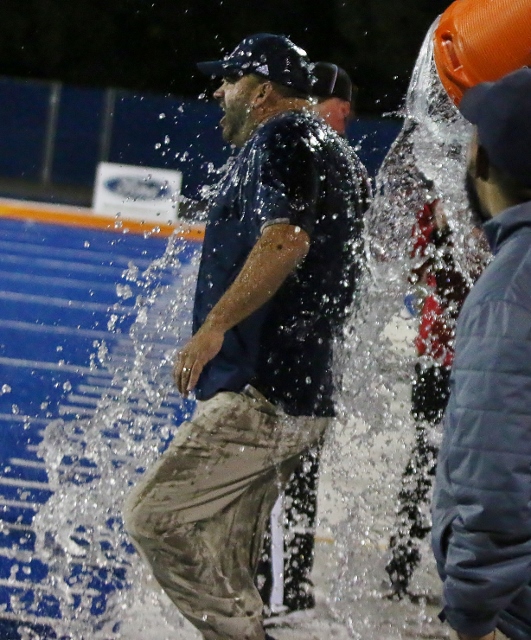 Sierra Canyon head coach Jon Ellinghouse gets the gatorade shower as the game nears the end.

Getting the ball with less than a minute left in the half no one would have blinked an eye if Ellinghouse decided to kill the clock and go into the locker rooms with a 10 point lead. Ellinghouse instead trusted his offense and called a drive to get the ball down field and in position for a score. When the drive stalled at the Eagle 12, Ellinghouse sent out Bryan again and the junior kicker nailed a 29-yard field goal.

Up 20-7, Sierra Canyon got the ball to start the second half and had designs on putting the game out of reach. 14-plays later, the Trailblazers found paydirt again with Hunter Williams getting the call from two yards away. Sierra Canyon went for two and Perry punched the ball across the goal line. The drive was kept alive by Williams who gained 16-yards on a fourth and two.

The final exclamation point on the championship was also added by Williams who got loose on a 23-yard scamper with 7:38 left in the game.

Sierra Canyon will now wait and see if they get an invitation to the first round of the CIF State Bowl games.

(388)
$99.99 (as of n/a - More infoProduct prices and availability are accurate as of the date/time indicated and are subject to change. Any price and availability information displayed on [relevant Amazon Site(s), as applicable] at the time of purchase will apply to the purchase of this product.)

(9816)
$24.99 (as of n/a - More infoProduct prices and availability are accurate as of the date/time indicated and are subject to change. Any price and availability information displayed on [relevant Amazon Site(s), as applicable] at the time of purchase will apply to the purchase of this product.)

(12712)
$269.00 (as of n/a - More infoProduct prices and availability are accurate as of the date/time indicated and are subject to change. Any price and availability information displayed on [relevant Amazon Site(s), as applicable] at the time of purchase will apply to the purchase of this product.)
Posted in High School Football, High School Sports

7 Comments to "One Year Ago: Sierra Canyon At The Top…Again"