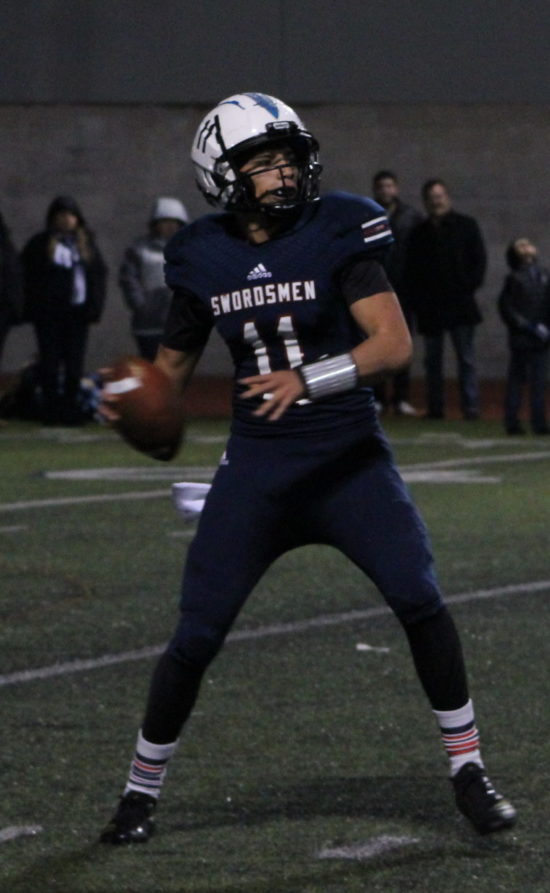 “It feels good. Great team win,” said Sweet after the game. “We worked hard. We blocked, played defense, hard defense. Shoutout to my defense. Thank you. Way to hit and good job.”

At the start of the game, Aquinas struggled to move the ball offensively against St. Paul’s defense, which only allowed an average of eight points throughout the 2019 campaign. Thanks to the protection, the Swordsmen jumped to a 10-0 lead in the first half.

Then on the next series, the Swordsmen scored the games first touchdown when Gene Valdez hooked up with Garcia for a 38-yard touchdown strike, extending the lead to 10 going into intermission.

Following the break, the Falcons opened the second half by orchestrating a 13-play drive that resulted in Sweet’s first touchdown when he bullied his way for the score from a yard out. The team added two points after the score when the ball slipped out of Francisco Mauigoa’s hands, who then was able to pick it up and score the two points.

“We got together with the line and talked about how we are going to get the job done and fix our mistakes,” Said Sweet when asked about the second-half adjustments.

The momentum then shifted on the ensuing kickoff when Aquinas elected to onside their kick and recovered it at midfield. Seven plays later, Sweet added his second touchdown of the night, giving his team the 14-10 lead with 5:33 left in the third quarter.

St. Paul tried to rally back and construct a touchdown drive of its own, but because of a holding penalty that was committed by the Swordsmen, it pushed them to a 4th and long situation. The series ultimately ended on downs when Valdez’s pass fell incomplete with 8:52 left in the fourth quarter.

Aquinas put the game away midway through the fourth when Sweet took the handoff and blew by the defense for the 41-yard score, giving his team a 21-10 lead.

St. Paul added a touchdown late when Valdez connected with Garcia for the second time. However, with a failed two-point conversion and onside kick, the Falcons were able to take the ball and kneel their way to a championship.

9 Comments to "Sweet Victory for Aquinas"