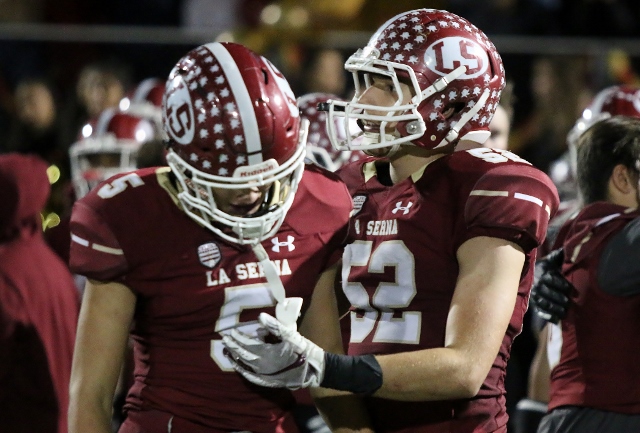 La Serna came up a point short in its bid to win the Division 6 championship against Pacific/Oxnard at California High School. Tim Peterson wrote the game story and Duane Barker took the pictures in a game that became an instant classic one year ago on Saturday night November 30, 2019.

(Whittier) – La Serna led 35-21 in the third quarter but was unable to hold on and eventually fell to Pacifica/Oxnard 42-41 Saturday night in the CIF Division 6 Championship game at California High School.

This time they drove 75 yards on six plays with quarterback Andrew Henriquez going the last 19 yards for the score. With 6:06 left in the third quarter La Serna was up 35-21. 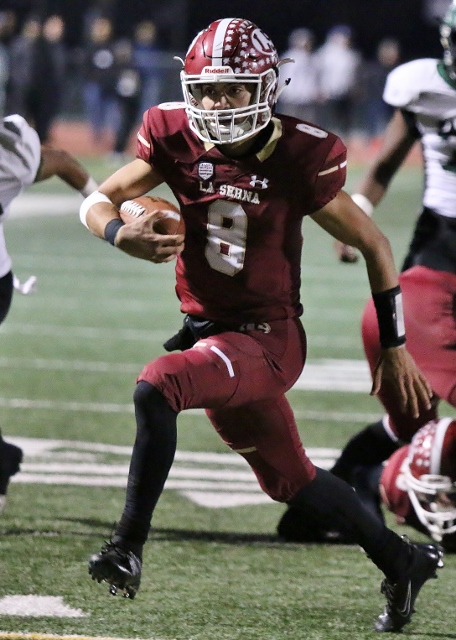 Andrew Henriquez threw for two scores and ran for one but it wasn’t enough. (Photo by Duane Barker).

Pacifica responded on the next series. RJ Maria hit Kyrie Wilson down to the 11-yard line. After a pass interference penalty Brad Bichard scored on a four-yard run to cut the lead to seven.

The turning point in the game came on the ensuing series. The Lancers dropped back to punt at their own 27, but the punt was blocked and Malik Sherrod, who was already having a huge night offensively, scooped up the ball and scored from three yards out and in just four minutes the Tritons had tied the game at 35. ‘ 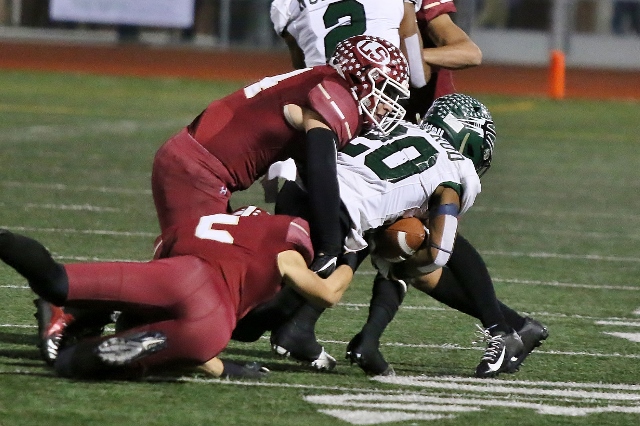 With the game still tied in the fourth quarter a bad snap on a punt attempt by La Serna led to Pacifica taking over deep in Lancer territory at the 27. A 24-yard Maria pass to Wilson set up a one-yard run by Bichard with 8:15 remaining to give Pacifica a 42-35 lead as the Tritons had reeled off 21 consecutive points.

La Serna had one last charge left on the next possession. The Lancers moved down the field 71 yards on 8 plays with Henriquez connecting with Jacob Leija for a four-yard touchdown pass. Another tie appeared to be at hand but the snap was dropped and by the time it was teed up for kicker Chandler McCaffer his boot came up short. Pacifica had maintained its one point advantage with 5:10 left.

Pacifica was forced to punt one more time and La Serna got the ball back at its own 15 yard line with 1:34 left on the clock. But after picking up one first down Henriquez was sacked on fourth down with less than a minute left and the Lancer hopes were sacked with it.

A couple of knees by Pacifica and that was all she wrote.

La Serna got off to a good start when Pacifica fumbled the opening kick off and Michael Quinones fell on it at the Triton 20 yard line. Three plays later McCaffer scored on a three-yard run for a 7-0 lead.

Sherrod countered with a 32-yrd TD scamper for Pacifica but La Serna landed another big blow with a 35-yard touchdown strike from Henriquez to Atallah Shalash to regain the lead.

Sherrod finished an 80-yard drive with an eight-yard scoring jaunt later in the first quarter to tie it at 14. The Tritons then grabbed their first lead early in the second quarter on a 24-yard touchdown toss from Maria to Wilson.

The Lancers tied it just before halftime when Pinales ended a short 44-yard march with a one-yard run with 10 ticks left in the first half.

The teams went into the break all knotted up with each side having scored three touchdowns. There were 12 scored in all – six by each team – with the one extra point being the difference.

For the Tritons Sherrod had 18 carries for 130 yards and two touchdowns to go with his interception on defense. Wilson had five catches for 97 yards and a touchdown.

For La Serna Leija corralled three catches for 67 yards and a score and Shalash had two for 51 and a TD. Henriquez threw for 242 yards and a pair of scores but he was hurt by two interceptions. He also rushed for 102 yards and a touchdown.

While Pacifica celebrates a CIF championship and a possible trip to the State playoffs, La Serna finishes with 13 wins, and 1 loss by 1 agonizing point.

15 Comments to "One Year Ago: La Serna Title Bid Falls a Buck Short"