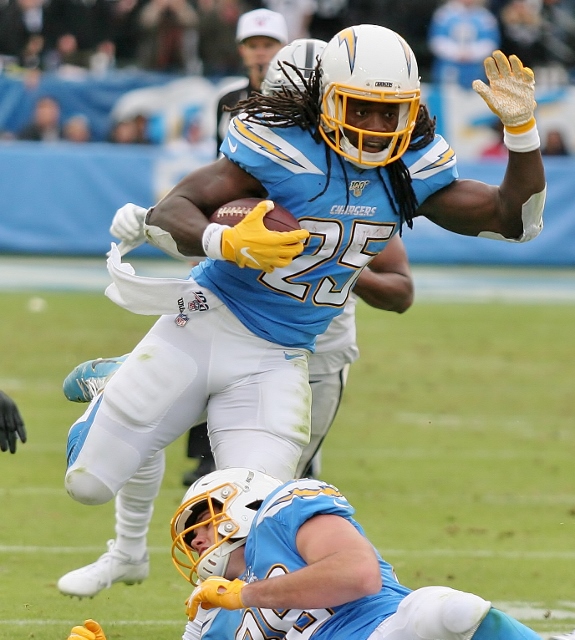 By Tim Peterson
(Carson) – The Chargers allowed touchdowns on Oakland’s final possession of the second quarter and the opening series of the third quarter and never recovered in a 24-17 loss to the Raiders Sunday at Dignity Health Sports Park. It was the last game for the Chargers at the Stadium in Carson.

The Raiders scored on their first possession. Derek Carr hit Hunter Renfrow, he broke a tackle by Desmond King and was off to the races for a 56-yard touchdown for a 7-0 lead.

The Chargers punted on their first five possessions. They finally broke through on the sixth as Melvin Gordon capped an eight play, 78-yard drive with a one-yard run to get LA even with 1:54 left in the first half.

Oakland responded with an 11-play, 75-yard drive with Derek Carr keeping it himself and going the last three yards for a 14-7 lead with eight seconds left in the half.
The Raiders took that lead into the break.

Oakland took the second half kick off and marched 75 yards on 13 plays. DeAndre Washington finished the drive with a five-yard run to put the Raiders up 21-7. 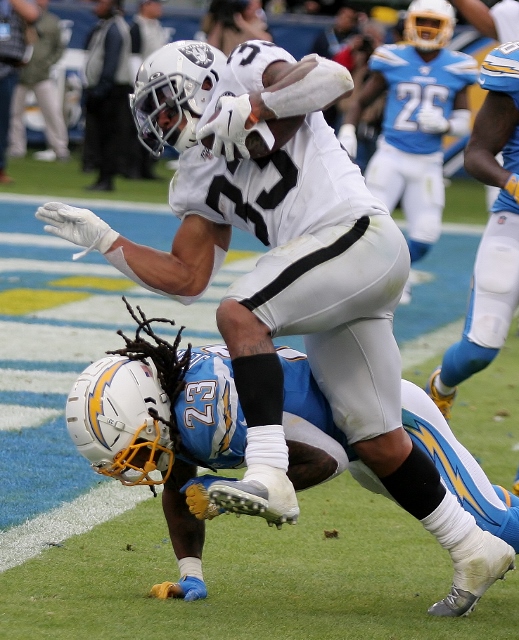 The Raiders’ DeAndre Washington scored early in the third quarter to give Oakland a 21-7 lead. (Photo by Duane Barker).

Gordon got his second score of the day on the Chargers ensuing series. His one-yard run capped an 83-yard drive to cut the Raider lead to 21-14 with 1:04 left in the third quarter.

Daniel Carlson booted a 48-yard field goal with 8:28 left in the fourth quarter to give the Raiders a 10 point lead at 24-14.
The Chargers got the ball back on their own 10-yard line down ten points with 3:32 left in the contest.

Raider cornerback Trayvon Mullen was carted of the field after taking a shot from his own safety Curtis Riley with 2:05 left.

Michael Badgley kicked a 27-yard field goal with 1:29 left to get the Chargers within seven at 24-17, however the Raiders then recovered the onside kick and ran out the clock to seal the victory.

Oakland quarterback Derek Carr was under pressure here but threw for 291 yards and a touchdown. (Photo by Duane Barker).

For the victorious Raiders, Carr completed 26 of 30 for 291 yards and a touchdown. Renfrow caught seven passes for 107 yards and a score. Washington had 23 carries for 85 yards and the touchdown.

Rivers was 27 of 39 for 265 yards for the Chargers. His favorite target was Keenan Allen who hauled in five receptions for 71 yards. LA was never able to establish a ground game as rushing for just 19 yards on the day.

With the victory the Raiders improved to 7-8 on the year and still have a mathematical shot of making the playoffs. The Chargers dropped to 5-10 on the year and are looking forward to next year in their first season at the new SoFi Stadium in Los Angeles.