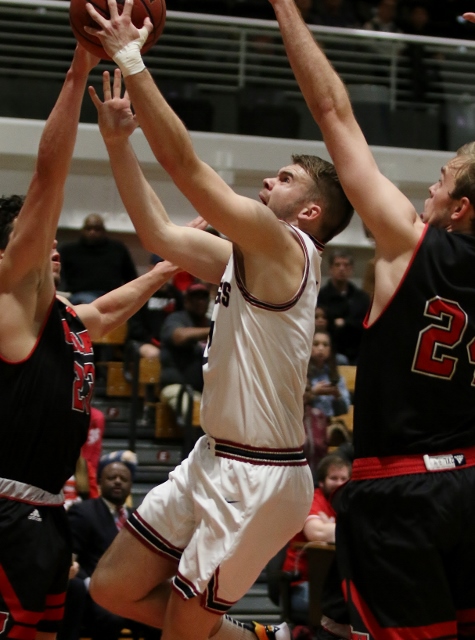 Brennan Rymer hit eight threes for the Cougars and finished with 24 points. (Photo by Duane Barker).

The Cougars hit 16 three pointers on the night including eight by Rymer who was 8 of 11 from beyond the arc. While Rymer was doing the damage from the outside, Mawugbe was dominating down in the paint. Mawugbe was 9 of 11 from the floor which included a couple of rim rattling jams. He also sank 7 of 8 from the free throw line.

APU shot 54 percent from the field for the game and 48.5 percent (16-33) from three point land. The Cougars continued the hot hand at the line as well hitting 9 of 10 for the game.

Azusa Pacific was up by just three at 36-33 with 3:37 left in the first half. Rymer then buried consecutive threes and Ben Avera hit one from long distance and just like that it was 45-33. The Cougs led 45-35 at the half. 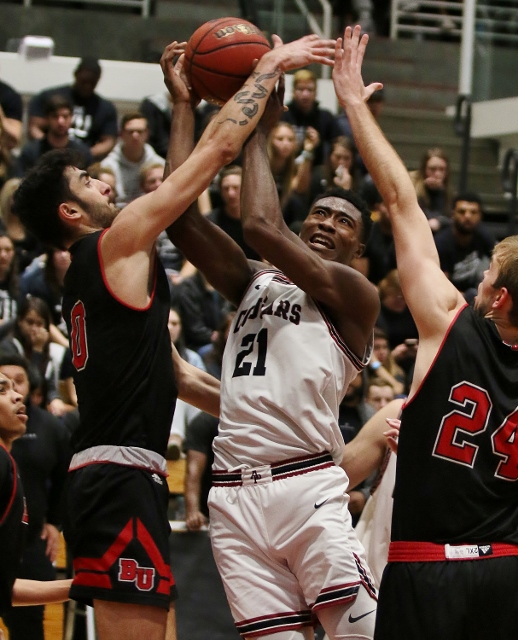 Selom Mawugbe was a force down low for APU with 25. (Photo by Duane Barker).

In the second half APU opened it up. The Cougars stretched the lead to 15 just three minutes into the half before eventually going up by 20 with 7:10 left at 70-50. Biola, which stayed close early, was never able to gain any momentum in the second half.

Mawugbe and Rymer were the only players in double figures for Azusa Pacific but the Cougs had a balanced attack overall. Jake Spurgeon, Avera, and Terrance Becvar all had nine points each and Gerrit Beetstra hit two threes for six. Noah Bundrant had eight rebounds to lead the team and Mawugbe pulled down seven.

For Biola former Maranatha star Jesse Elrod led the team with 15 points going 5 for 13 from the floor. Marquise Mosley was also in doubles with 11.

Next up for APU is a home game next Saturday against Notre Dame De Namur.