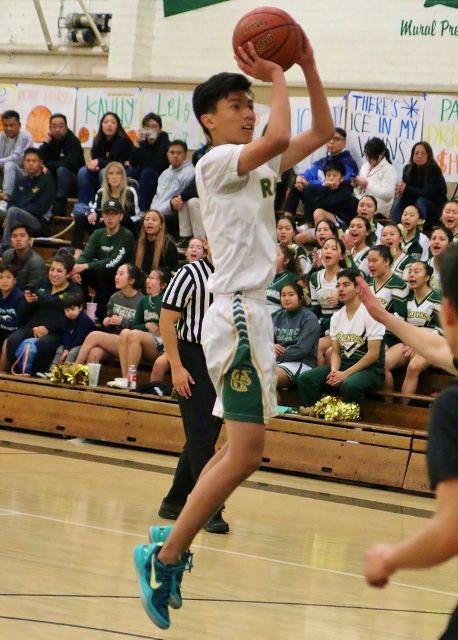 Nathan Kuoch had a huge fourth quarter for Temple City and had 27 points overall. (Photo by Duane Barker).

Kuoch hit six three pointers overall in the contest and four in the decisive fourth quarter. San Marino led 41-39 headed into the final frame and still led 52-48 mid-way though the quarter. Kuoch then buried back to back threes to give the Rams a 54-52 lead and send the Temple City faithful into a frenzy. Kuoch was just getting started though.

The senior guard hit two more threes including one from NBA distance that carried the Rams to victory. San Marino had its chances but Ethan Deng, who led the Titans in scoring with 16 points on the night, missed four consecutive free throws down the stretch. The Rams on the other hand knocked down six of eight from the stripe in the final frame as Elton Lo buried three straight in the last two minutes.

By the time the dust had settled in the Temple City gym the Rams had racked up 26 points in fourth quarter after scoring just 39 in the first three periods. 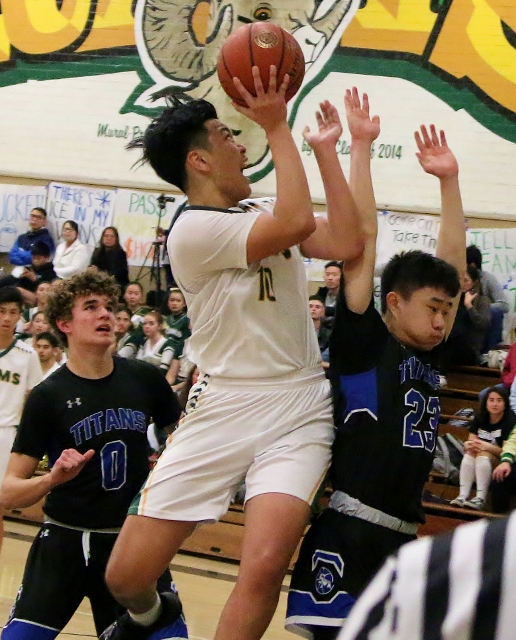 Elton Lo makes a move inside. (Photo by Duane Barker).

San Marino was the hot team early on outscoring Temple City 8-0 to open the game. The Titans led by Deng’s two threes, had a 14-8 lead after one. TC outscored San Marino 17-10 in the second quarter to take a 25-24 halftime advantage.

In a close third quarter the Rams scored the first five points to grab the lead but San Marino went on a 15-4 run to go up 39-34. The Titans still led by two after three and still were up in the fourth until Kuoch and Temple City turned it around.

Kuoch was the only Ram in double figures but Edwin Lin contributed to the cause with a pair of threes and finished with nine points. Brandon Torimaru added seven and Lo and Tag Falk each had six. Temple City nailed nine threes in all.

For San Marino after Deng’s 16, Joey Fuerst scored 13 and Trond Grizzell and Lemuel Li each tossed in 11.

1 Comment to "Temple City Turns it On in Fourth"