Terrance Becvar had 17 points for the Cougars but they came up just short. (Photo by Duane Barker).

By Tim Peterson
(Glendora) – Azusa Pacific raced out on a 16-0 run to open the game but it didn’t hold up in the end and the Cougars fell to Biola 82-79 Friday night in the PacWest Tournament at Felix Event Center.

Azusa Pacific had a chance to tie it but Brennan Rymer’s three point shot bounced off the rim as time expired.

Biola had taken the three point lead when Michael Bagatourian knocked down a three with four seconds left. The Cougars then got the ball to the front court with three seconds left. Rymer had a good look at the top of the key but couldn’t get it to fall.

Biola then battled back with a 10-0 run of its own to cut the Cougar lead to 25-18. Jake Spurgeon hit a three to stop the bleeding but the Eagles were in it the rest of they way. 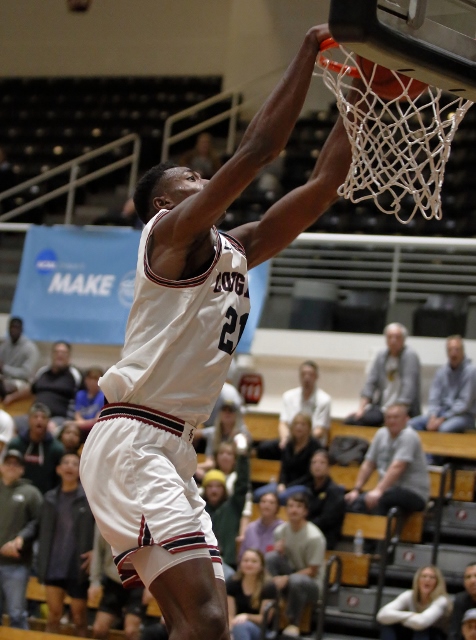 Selom Mawugbe throws it down. (Photo by Duane Barker).

Azusa Pacific worked the advantage back to 10 and took a 42-32 lead into the half. Spurgeon led the way with 9 points at the break hitting 2 of 4 from three point land. Selom Mawugbe had 7 and Noah Bundrant, with two threes, had 6.

For Biola Chris Rossow went 6 of 10 from the field and led the team with 15 points. Bagatourian scored 6.

Biola got serious quickly in the second half going on a 10-1 run right out of the gate as a bucket by Alex Wright cut the APU lead to 43-41. A Mawugbe slam and a basket by Brennen Rymer stemmed the tide momentarily.

A Biola basket and a three ball by Whitten Dominguez got the Eagles within one at 50-49.

But Terrance Becvar and Spurgeon hit consecutive baskets for the Cougars to restore order. Later Ben Taufahema and Noah Bundrant buried treys to put Azusa Pacific up 68-62 with just over 11 minutes remaining. 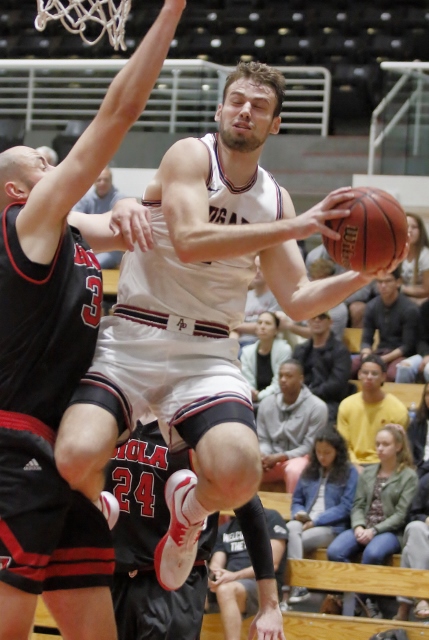 Jake Spurgeon makes a move inside. (Photo by Duane Barker).

Mawugbe hit one of two free throws and Terrance Becvar hit one from behind the arc to tie it at 79 with 49 seconds remaining. Bagatourian then untied it and Rymer’s shot fell off the rim at the end to dash the Cougars hopes.

The loss not only knocked the Cougars out of the PacWest Tourney but also snapped a 20 game APU winning streak.

Mawugbe led the Cougars with 20 points on the night and Becvar had 17. Spurgeon tossed in 11 and Bundrant had 9. Rymer finished with 6. For Biola Rossow had a game high 27 and Bagatourian scored 20. Wright had 13 and Dominguez 12.

The Eagles will play Point Loma Saturday at 4:00 for the PacWest Tournament championship.