Rolf Feltscher had a good night defensively for the Galaxy. (Photo by Duane Barker).

By Tim Peterson
(Carson) – The Galaxy allowed just one goal, in the 74th minute, but that was all Vancouver needed to spoil the home opener and beat LA 1-0 Saturday night before a sold out crowd of 26,382 at Dignity Health Sports Park.

Both teams had their chances but neither could cash in until Vancouver finally broke through. Tosaint Ricketts took a pass from Ali Adnan in front of the net and beat LA goalkeeper David Bingham with a shot into the back of the net for the only goal of the game. The Whitecaps made it stand up the rest of the way.

The Galaxy had an opportunity early but Alexsandar Katai’s header off of a nice cross from Emiliano Insua was wide in the 8th minute of action.

Cristian Pavon had a chance in the 15th minute but his shot from the right side sailed high. in the 24th minute Vancouver goalkeeper Maxime Crepeau crept all the way out of the box giving Sacha Kljestan a shot at an empty net, but his boot from 40 yards out was wide left.

Two minutes later, Andy Rose had a header for the Whitecaps that hit the crossbar.

Katai received a yellow card in the 34th minute. In the 36th Katai kicked Crepeau in the head as the two were charging for the ball. Crepeau made the save and was down for a couple of minutes before rising to his feet and resuming action. 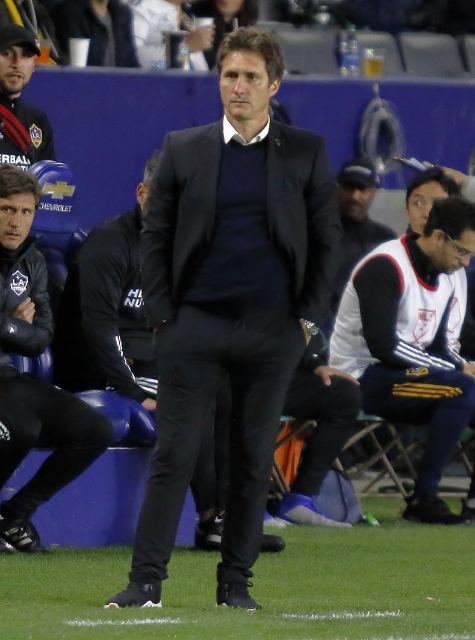 Two minutes of additional time were added in the first half. The teams went into the break scoreless.

The Galaxy had 8 total shots in the first half compared to 7 for Vancouver but the Whitecaps had two on target.

Rolf Feltscher had a good look early in the second half but his shot on goal was knocked away.

David Bingham came up with a save off a blast from Lucas Cavallini in the 71st minute. a pass from David Milinkovic set him up. The Whitecaps broke the ice in the 74th minute on Ricketts’ goal.

Emiliano Insua created several chances for the Galaxy but they still couldn’t find the back of the net. (Photo by Duane Barker).

Joe Corona, who had received a yellow card earlier, was ejected from the game after picking up a second yellow card for a hit on Russell Tiebert. The Galaxy had to play with ten men the remainder of the match.

Vancouver was awarded a free kick after a foul on Giancarlo Gonzalez but Bingham made the save in the 88th minute. Fans began to throw bottles on the field before the penalty kick.

Seven minutes of additional time added but LA still couldn’t find the back of the net. Pavon had an opportunity in extra time but Crepeau was up to the task again and
Vancouver held on for the win.

Javier “Chicharito” Hernandez, the Galaxy’s biggest off season acquisition, had just one shot all night.

“I’m disappointed with the result,” said Galaxy Coach Guillermo Barros Schelotto. “They had one shot and they scored. They surprised us when they scored.”

The Galaxy, who tied Houston last week in the season opener, fell to 0-1-1 on the year.