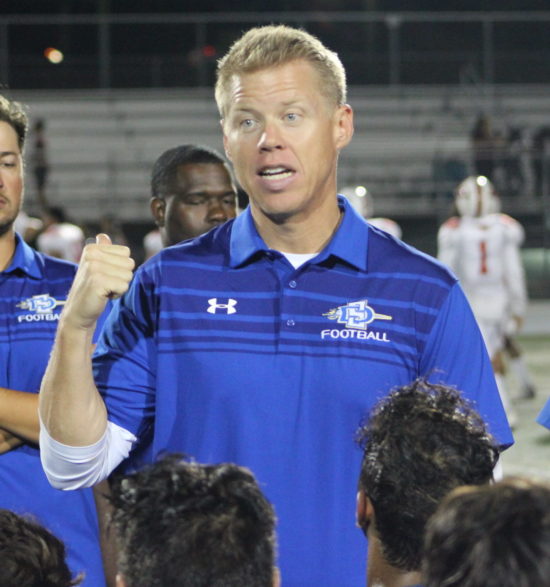 Mark Holman took over as the head coach at San Dimas in 2015. The Saints have made the playoffs every season and have an overall record of 45-16 during his five year run. They have won or shared two Valle Vista League titles.

Q: How are you keeping in contact with your players during these difficult times of the Pandemic?
A: Weekly hudl and google meet video meetings.

Q: I know you went to High School in San Diego. What position did you play on the football team?
A: Played center and linebacker. Never came off the field.

Q: Did you play football after High School?
A: Played center and long snapper at D3 Willamette University in Salem, OR

Q: When did you decide you wanted to be a High School football coach?
A: Probably during my senior year in high school. My oline coach had a great impact on me. He taught history. He played at USD and was our coach right out of college. He is now the AD at my alma mater

Q: When Coach Bill Zernickow stepped down after the 2014 season it seemed like a smooth transition when you took over. Was it always your goal to be a head coach…either at San Dimas or another school?
A: It was my goal to be a HC sometime after we won in 2009 but didn’t ever think I would be one at San Dimas because I didn’t ever think Bill was leaving. We discussed what was happening and it seemed like a good fit.

Q: How similar is the offense now compared to when Coach Zernickow was there? Are the schemes basically the same or are there some differences?
A: The offense is very similar. It just depends on what we have to work with every year.

Q: Did you feel any added pressure taking over a successful program like San Dimas? If so how did you embrace or deal with that?
A: I knew there would be pressure to keep the program at a high level. But that’s what makes coaching fun for me. Having a high winning expectation keeps my coaches and I working at a high level.

Q: You’re coming off an undefeated Valle Vista League run, an 11-2 record overall and a trip to the CIF Division 9 semi finals. How do you feel about this year’s squad? Can it be even better or is that too high of an expectation?
A: If we can get back on the field with adequate preparation time before our first contest, this team could be better than last years team in terms of ability. However, our new schedule may be a little tougher. It just depends on our kids health going into the big games.

Q: Who’s your biggest rival? I think I know the answer but interested in what you think.
A: Biggest rival is Bonita. That should be obvious. Both squads know each other and know what’s at stake, and I think there is a respect for both sides. When it’s over it either feels good or bad depending. But we just learn and move on.

But there are 1 or 2 other schools that I believe we have built a different type of rivalry with as well.

5 Comments to "Q & A With San Dimas HC Mark Holman"