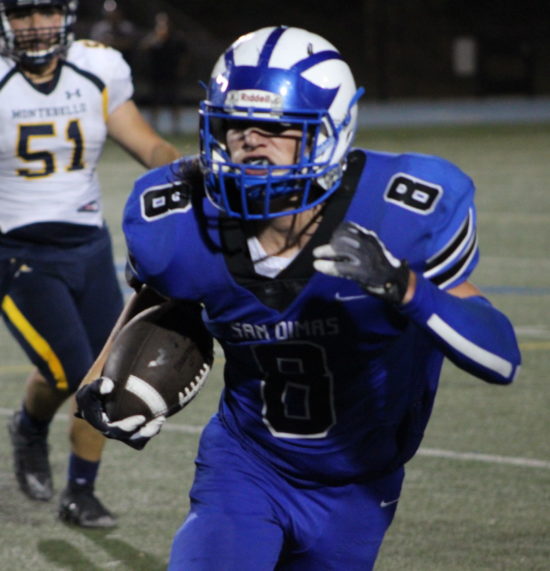 Running back Jacob Buccola is back for San Dimas.

By George Hernandez
Here are some area returners to look out for in the 2020 football season.

El Rancho: The Ranch loses a lot to graduation but they do have Jorge Villa a RB/OLB who found the endzone four times and had 54-tackles, seven for losses and 3.5 sacks.

Los Altos: The Conquerors bring back some talent in big quarterback Justin Gaytan who is back after splitting time last year. It might be the same this year with the transfer of former Nogales QB Darian Urruita. They also bring back talented WR/CB brothers Zedekiah and Zecheriah Rodriguez-Brown.

San Dimas: The ground and pound attack of the Saints will bring back a 1,000-yard rusher in Jacob Buccola and look for DJ Williams to get a lot more carries this year. Quarterback Ryan Bulick (1,328 yards passing) returns as well.

Northview: The Vikings have been spoiled at QB for the last six seasons with Steven Comstock and James Jimenez, now James Arellanes son of former area coach Jim Arellanes looks like the heir apparent. He’ll have some help in the backfield with returning RB Cheo Medina.