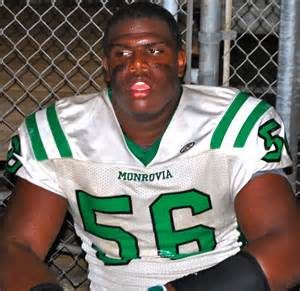 Ellis McCarthy is number one on Mike Minter’s Top 5 list.

Mike Minter, who has been an area assistant coach for nearly two decades, chimes in with his Top 5. Minter coached at Monrovia from 1998-2013 and at Bosco Tech from 2016-2018. He has since returned to Monrovia and will be on the Wildcats staff this year.

1. Ellis McCarthy (Monrovia) DL
Pure domination. Dbl and Triple teamed his whole HS career. Man amongst boys. Unstoppable one vs one. Great explosion with great feet. Had the joy of coaching him all 4 of his HS years. Tons of accolades. ESPN TOP 150. USA All American. All CIF. 2x CIF Champion. Played his college career at UCLA.

2. Nick Bueno (Monrovia) QB
Probably the best pure athlete I’ve had the privilege of coaching. Big game player. Pure competitor. No situation was to much for him to handle. Led our Offense to Monrovia’s first ever CIF Championship in 2010. Received MVP POY his Senior year. 2x CIF Champion. Incredible Baseball player as well. Played his college career at Cal Lutheran.

3. Akil Harris (Monrovia) RB
His nickname was Cadillac. Smooth, graceful, and explosive. One of the pure RB specialist that are hard to find. Workhorse. Great vision. Had that OG deadleg cut. Fun to watch. Led by example on the field. First game I watched him play he went for 400 yds and 6 TDS vs South El Monte. SuperPrep All American. LATimes and San Gabriel Valley Offensive Back of the Year. Played his college career at UCLA.

4. George Frazier (Monrovia) TE/LB
Also known as G5. Where do I start with George. The epitome of a Football player. Did it all. Understood what it took to be special. Great hands. The game flowed easy for him which in hand set him up to make some incredible plays. Could put him in a stance in a 40 or stand him up in a 50. Prep Star All West. SuperPrep All West. 3x CIF Champion. Played his college career at U of Colorado.

5. Kurt Scoby (Monrovia) RB
Also known as Scooby. One of the hardest working athletes I’ve been around. First on the field and the last to leave. Just a BEAST the way he ran the ball. Run you over or run right by you. Only had the joy of having Kurt one year and oh my. Had to ease him back during practice because he would be knocking players out during Team. Impressive in the weight room too. Ran for 2,206 and 35 YDs his Senior year. Played his college career at Fresno State and Azusa Pacific