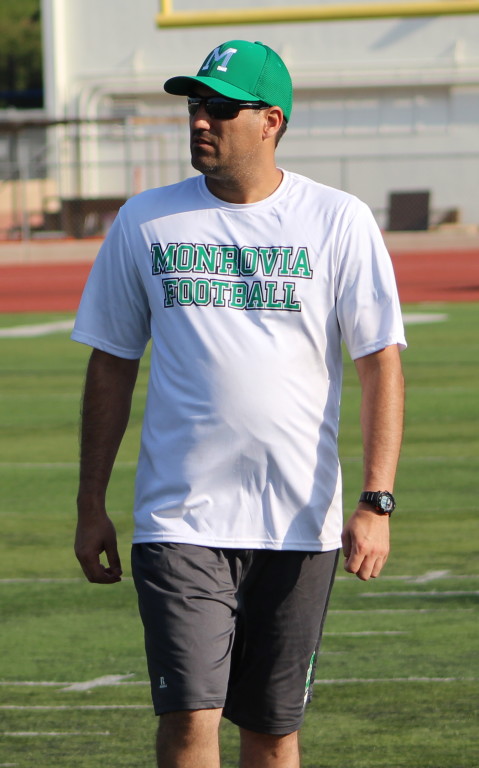 Jacob Ochoa has been the defensive coordinator at Alhambra and also coached the defensive backs at Glendale JC. He is currently the DB coach at Monrovia under new head coach Jerry Chou.

When you hear cover 2, you tend to think of 2 safeties with deep coverage and 5 players with underneath coverage, typically cornerbacks and linebackers. Having now worked for 3 different D Coordinators over the years, I have realized that the saying “there’s more than one way to skin a cat,” is definitely true. Just like there are many different schemes and defensive fronts being run all over the country, there are also several ways to run Cover 2 Zone coverage.

“Anyone who has a kid trying out for his High School football team needs to read this book. Torosian has taken his 20 some years of reporting on Prep sports, mixed a healthy dose of San Gabriel Valley insider references and created a very readable first effort.”
“A page turner…I’m sorry it’s over! Is a sequel in the works?”
“Torosian does for high school football what Hemingway did for the Spanish Civil War…compelling look beyond the scoreboard and into the lives of players…”
“A truly great story unfolds in the pages of Joe Torosian’s first novel. With high school football at its core, the story of Dale Andrade shows how a young man grows in all aspects of his life thanks to being a part of a team and a football community.”
“This is a great read for everyone: from those who love high school football to those who have no idea about the game.”
“This book brings you onto the field and into the locker room…”
Joe Torosian’s high school football novel is available through Amazon.com –click pic–
(Cover by Pat Cherry www.blackheartart.com)

The most traditional way to run a Cover 2 is the cloud coverage which keeps the corners hard on the flat. The safeties will split the deep coverage into 2 zones, and the remaining backers will have hook and curl zone responsibilities. This coverage will allow the corners to take away any short, quick throws like bubble, hitch, quick outs, and also to play hard on the run. Corner play can almost look like a blitz when they read run, as they have no deep responsibility in the pass game. The safeties split the deep field in half, which makes them vulnerable for quick throws behind the corners as well as plays that involve 3 or 4 deep routes. The deep middle is especially vulnerable in a cloud cover 2.

In trying to solve the deep middle dilemma, coaches have gone to the Tampa 2 coverage used by several NFL coaches throughout the years. In a Tampa 2, the corners will continue to play cloud coverage in the flat; however the Mike or Will linebacker will have deep middle coverage responsibility. The middle linebacker has infinity coverage down the middle and will keep running as deep as he needs to. This allows the safeties to play coverage outside of the hash marks and in essence will have a 3 deep coverage mentality to be able to defend 3 to 4 deep routes. The remaining linebackers will have hook and curl responsibility, which leaves the defense vulnerable to short throws across the middle. There is also a potential mismatch with a deep receiver against a dropping middle linebacker.

Finally there are those that run a Cover 2 that looks and feels more like a Cover 4. This was the system that I was under at Alhambra for many years. The corners have flat responsibility but they also have deep help responsibility. So they may continue dropping or help out on vertical routes. This will allow the safeties to play closer to the hash and protect against deep middle throws such as post routes. This type of cover 2 will have 2 corners and 2 safeties playing 4 vertical routes, which could be an advantage to the defense. The remaining linebackers would play curl to flat and middle linebacker has the entire hook zone. This type of cover 2 will be vulnerable to flat throws as the linebackers are reacting late, and also the middle linebacker has a 10-15 yard hook zone to cover. However this Cover 2 system will be stout against deep throws.

As you can see there are several ways to run a Cover 2, and each DC will have their own variation, rules and disguise for their coverages. As you watch high school, college and NFL games this season, watch closely to see the different types of Cover 2 systems that each team runs.