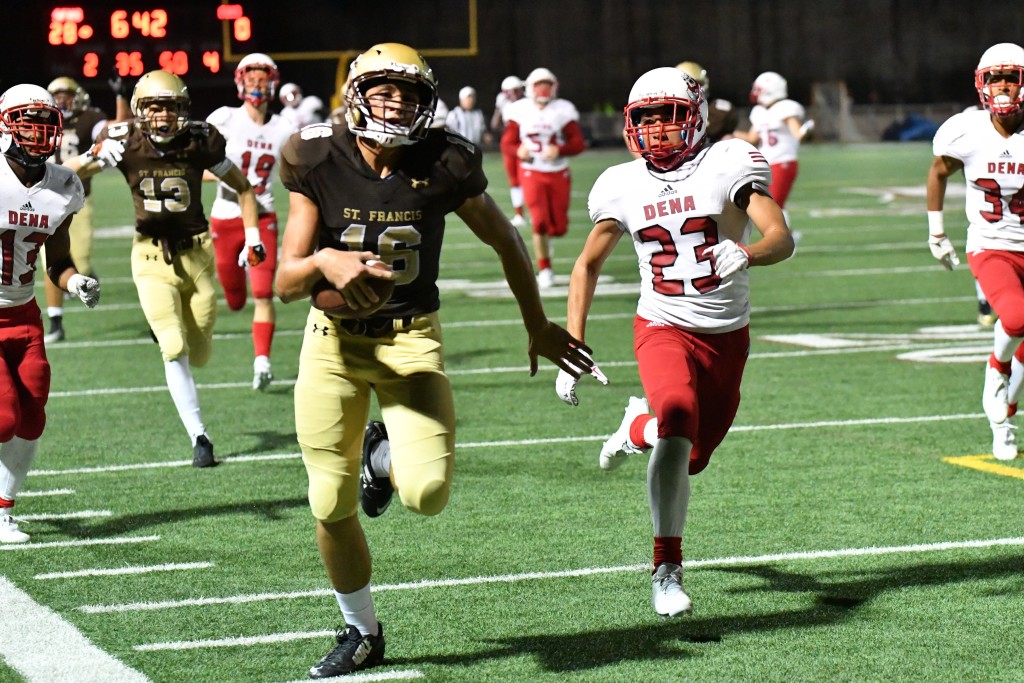 (La Canada) — The St. Francis offensive line paved the way for 260 rushing yards and four touchdowns, all by different running backs in the Knights 35-0 win over Pasadena Thursday night at Friedman field.

Both St. Frank’s and the Bulldogs struggled to gain momentum in the opening stanza. Between the two, failing to convert on third down seemed to be difficult. Pasadena punted on all three of their possessions in the first while the Knights punted on their opening possession.

It wasn’t until St. Francis went for it on a fourth and short with less than a minute to go in the frame. Fullback Maxx Jakeway bulldozed and powered his way to keep his team’s drive alive. Less than a minute later, Jace Harrick took the handoff and high stepped his way into the end zone for six with 23 seconds left in the quarter.

Midway through the second quarter defensive back Daniel Scott picked off Daron Derderian’s pass and  and returned it to the Knight’s 40 yard line. Four plays later Scott takes a Michael Bonds pass and scores on the 22-yard touchdown reception.

Following intermission, the Golden Knights ground and pound game started to take effect. On all three of their scoring drives, a different running back crossed the end zone.

Maxx Jakeway was the first to score when he bulldozed his way for a 7-yard score early in the third quarter. Elijah Washington weaved his way for six and backup quarterback Greg Dulcich kept the option and scored from 50-yards out late in the fourth quarter, putting his team up 35-0 before the final buzzer.