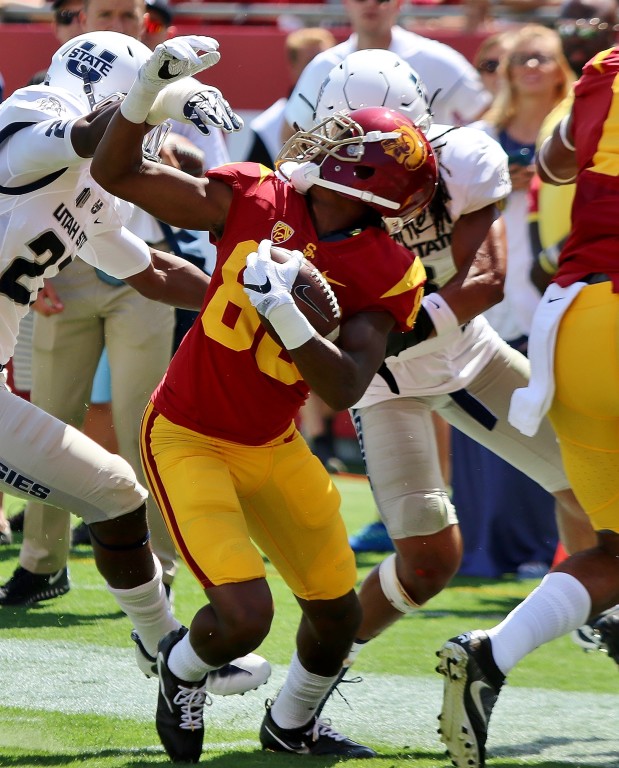 Deontay Burnett fights through the facemask and gets the Trojans on the board. (Photo by Duane Barker)

The Trojans needed a bounce back victory after last week’s embarrassment against Alabama and Utah State was happy to oblige.

Utah State missed a 37-yard field goal on the next series as USC took over again but Matt Boermeester missed wide right on a 42-yard field goal attempt for USC. It was 7-0 at the end of one.

The Trojans then went 87 yards on 12 plays. Sam Darnold, in relief of Browne, found Deontay Burnett on a 13-yard touchdown pass for a 14-0 advantage with 8:00 left in the second quarter. 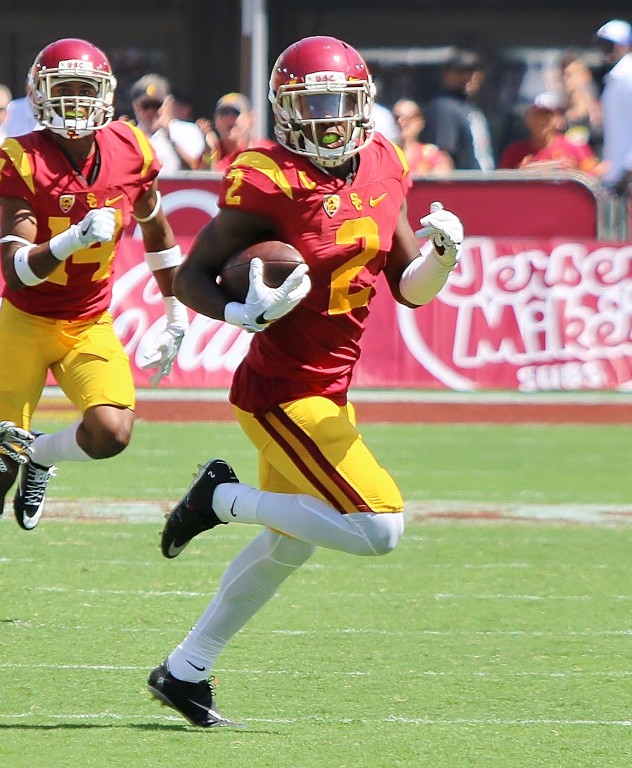 Browne returned after missing just one series and the two teams exchanged interceptions mid way through the second quarter. The Trojans then put together a drive of nine plays, 48 yards that was capped by a two-yard touchdown pass from Browne to Steven Mitchell Jr. to make it 21-0 at the half.

Browne was 18 of 24 for 135 yards with two touchdowns and an interception at the break. Darreus Rogers and Smith-Schuster both had five catches. Rogers had 59 yards and Smith-Schuster 29 and a score. Justin Davis had 11 carries for 52 yards on the ground.

Utah State couldn’t solve the Trojans D and had only 83 total yards in the first half.

In the second half Boermeester booted a 20-yard field goal with 6:38 left in the third to cap a 78 yard drive.

Adoree Jackson then lit up the Coliseum crowd with the highlight of the day when he returned an Aggie punt 77 yards for a touchdown later in the third. He fielded it on the run, picked up a couple of blocks and was off to the races. For Jackson it was his third punt return for a touchdown. He had two last year.

The Aggies finally broke through as the third quarter ended with a six-yard TD strike from Kent Myers to Wyatt Houston to complete a 75-yard, 12 play march.

Utah State went for it on fourth and two from their own 33 with over 11 minutes remaining but Myers’ pass was broken up giving USC the ball. Darnold, back in at quarterback, engineered a five- play 33 yard drive that he finished with a 15 yard scoring strike to Smith-Schuster with 9:45 left on the clock to put the Trojans up 38-7.

Aca’Cedric Ware bulled into the end zone from two yards out to cap a nine-play 63 yard drive with 2:44 left in the contest for the final score of the day to make it 45-7.

Browne finished the day completing 23 of 30 for 182 yards, two touchdowns and an interception. Darnold was five of seven for 62 yards and a pair of scores. Rogers and Smith-Schuster each had seven catches and Davis had 70 yards rushing on 16 carries.

For the Aggies, Myers was 25 of 37 for 204 yards, one touchdown and a pick. USC held Utah State to just 49 total rushing yards.

Both teams are now 1-1. The Trojans travel to Palo Alto next week to take on Stanford.

(110297)
$19.99 (as of n/a - More infoProduct prices and availability are accurate as of the date/time indicated and are subject to change. Any price and availability information displayed on [relevant Amazon Site(s), as applicable] at the time of purchase will apply to the purchase of this product.)

(11580)
$19.99 (as of n/a - More infoProduct prices and availability are accurate as of the date/time indicated and are subject to change. Any price and availability information displayed on [relevant Amazon Site(s), as applicable] at the time of purchase will apply to the purchase of this product.)