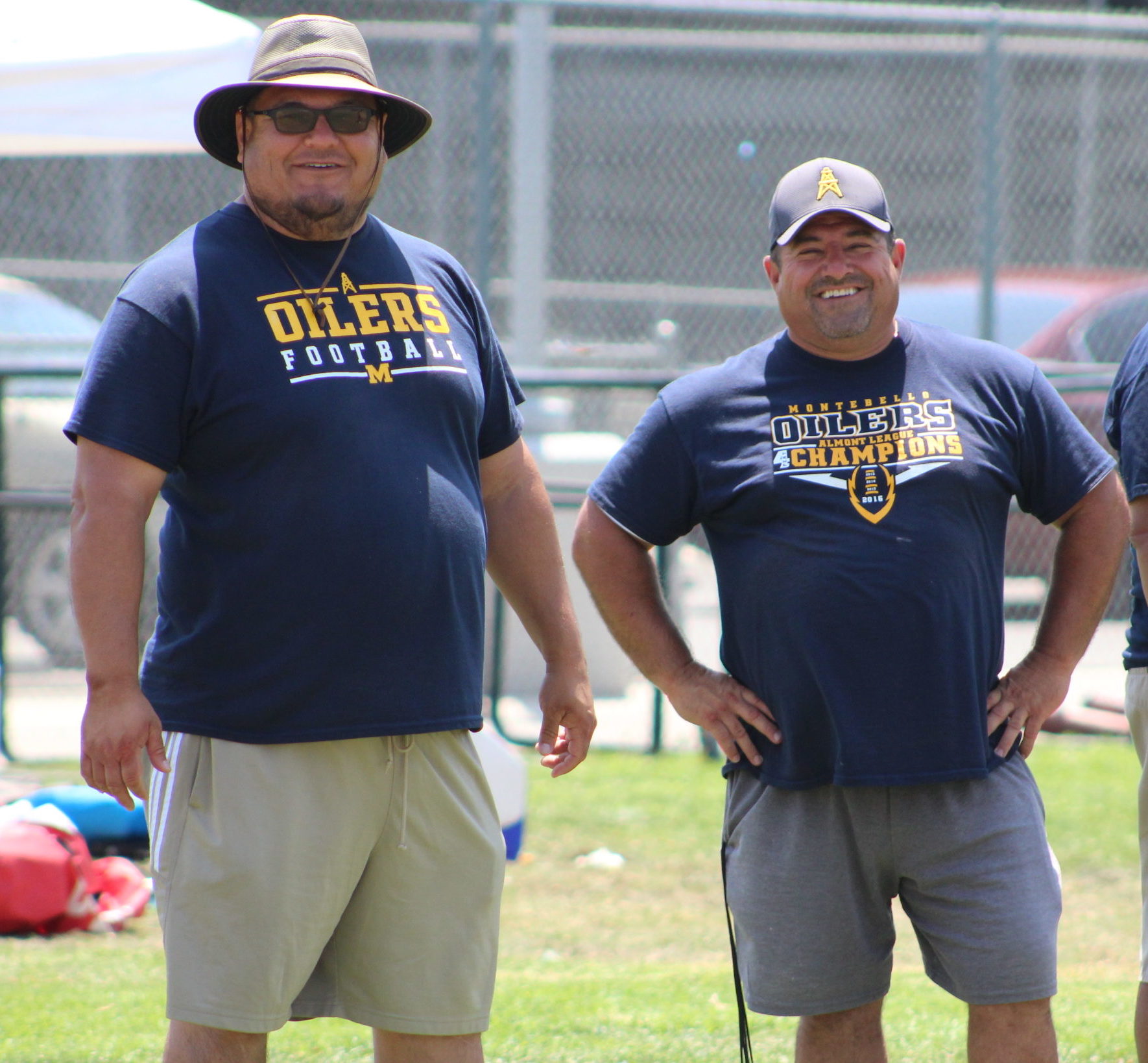 Can HC Pete Gonzalez (right), DC Jason Carlin (left) and the Oilers repeat in the Almont?

Who’s going to win the Almont? Some say Montebello wins it going away while others say Schurr is ready to unseat the Oilers as league champs. We know that Bell Gardens will be better and we’re hearing good things out of Alhambra. Here’s an early look:

Montebello: Until somebody knocks off the champions, they’re still the champions. That’s the way it is for the Oilers right now. Gabriel Tapia returns at quarterback and looks bigger and better than ever. The offense revolves around Tapia who threw for 2000 yards and rushed for 674 as well. Michael Vital provides some punch to the running attack as well. Linebacker Kris Rodriguez, who had 72 total tackles a year ago, is back to anchor the defense. The Oilers could be beat, make no mistake, but right now, they’re the team to beat.

Schurr: If there’s anybody that can take down Montebello it’s Schurr. The Spartans went 4-1 in league last year and looks much improved. Quarterback Miguel Aguero and receiver Lance Babb both return in what could be the most dangerous duo in the Almont. Add to that mix wide out Jeremiah Hartfield who has been lights out this summer. Francisco Remigio, who had over 800 yards in 2016, returns as well. The passing attack has been clicking as evidenced by the Spartans run to the semi finals at the SGV Shootout. We know the offense is there, and if the Schurr defense, which is traditionally solid, can keep opponents at bay, the Spartans are going to be tough to beat.

Bell Gardens: If nothing else, it’s Margarito Beltran’s second year at the helm, so the Lancers will be better. BG was very young a year ago and all of the those players are a year older and a year more experienced. Augustin Velasquez Jr. is back behind center as is running back Braham Rodriguez. The Lancers have been active on the passing circuit and improving every week. Can BG crack the top two? Probably not. But they could upset somebody’s apple cart somewhere along the way.

Alhambra: The Moors finished 5-6 overall last year including a 3-2 league record and a trip to the CIF playoffs. Alhambra has shown improvement each year under head coach Eric Bergstrom and this year should be no different. Salman Gurung, who rushed for 1045 yards and 13 touchdowns a year ago, is set for a big senior year. Julien Garcia, the back up last year, should get the nod at quarterback. Third place and a possible playoff berth should come down to Bell Gardens at Alhambra on October 20. Right now it’s a toss up.

San Gabriel: The Matadors have a new head coach in Kevin Encinas which could be a good thing (new beginning) or a bad thing (starting all over from scratch.) Either way it’s going to be a struggle for the Mats as they try to rise from the ashes. Last year their only league win was over Keppel, and they were outscored by Schurr and Montebello by the combined score of 108-7. One day San Gabriel will compete in league. It just won’t be this year.

Keppel: The Aztecs actually forfeited a game last year because they didn’t have enough healthy players to field a team. But slowly and surely Keppel is trying to get off the floor. John Tuttle is still at the helm as HC and brings a wealth of experience to the position. With consistency in the coaching staff, the hope is that eventually the players will come out and Keppel will get on track. Is there hope? Absolutely. Will it happen in 2017? No.

25 Comments to "An Early Look at the Almont"