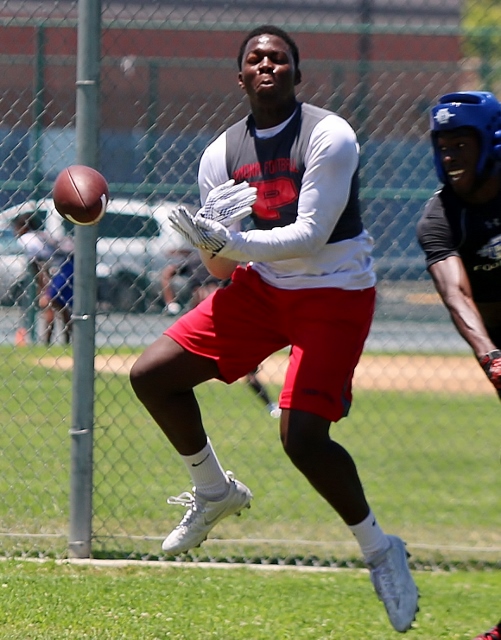 Most of the passing leagues are now in the rear view mirror and August is right around the corner so it’s time to look at another league. Here’s a peak at the Miramonte.

Pomona: The Red Devils tend to jump out in the Miramonte where there aren’t a lot of “name” schools. Pomona won a CIF championship three years ago and is still clearly the class of the league. Pomona went 4-0 in league last year and was never tested. There’s nothing to show that the gap has been closed. Pomona has looked good on the summer passing circuit. Daniel Limon, who threw for over 1000 yards last year is back to lead the offense and he has a nice target in Jesus Hernandez. Marshon Smith returns for his junior season after rushing for 604 yards and 11 touchdowns a year ago. The Red Devils simply have too many athletes to not repeat in the Miramonte.

La Puente: It’s always good to have your quarterback returning and La Puente has that in Jesse Hernandez. Hernandez keeps defenses honest as he is able to throw it or run it as he showed last year. LP likes to pound it and will be able to do just that with Quinton Groves who had 1,444 yards and 14 touchdowns in 2016. Head Coach Erick Williams has  the Warriors competing and they will again. But they will have there hands full on October 20 when they travel to  Pomona.

Garey: Garey was 2-2  in league last year and should be improved in 2017 with key starters returning at quarterback and running back. Samuel Lee had over 800 yards rushing a year ago and averaged 11.5 yards per carry. Lee, who will be a senior, will be joined by Salvador Tapia in the backfield in what will be a formidable one-two punch. Tapia ran for 527 yards and nine touchdowns. Quarterback Daniel Flores is also back and can give defenses fits as a dual threat.  Flores ran for 660 yards and threw for over 1000. The Vikes should be fine on the offensive side of the ball. Defensively Garey had its struggles last year allowing 49 points to Pomona and 32 to Bassett. If they can shore that up the Vikings can compete with La Puente for second place.

Bassett: It was a tough season for first year Coach Chris Long in 2016. It might not be much better for the Olympians this year. Quarterback Marcus Ruiz and running back Chris Cabral, who were the key cogs in the offense, have both graduated. Although as a local coach once said, “If all of your players are returning from a team that went 1-9, is that a good thing?” Bassett does have a couple of weapons coming back in Quinn Peoples, who had over 1200 yards receiving and David Monteon who can do some damage catching passes and returning kicks, but Long will need a lot more of his young players to step up if they are going to make any noise in league.

Ganesha: It seems like it’s a question that is asked every year as Summer turns into Fall. Can Ganesha make the playoffs? Usually the answer comes back a resounding no and even the most optimistic Giant fan would have trouble explaining how this year will be different. Ganesha was 0-4 in league last year and weren’t competitive in any of the contests. The Giants closest loss was 13 points to Bassett. Sometimes these things run in cycles and one year Ganesha will be back. It just won’t be this year.

19 Comments to "An Early Look at the Miramonte"