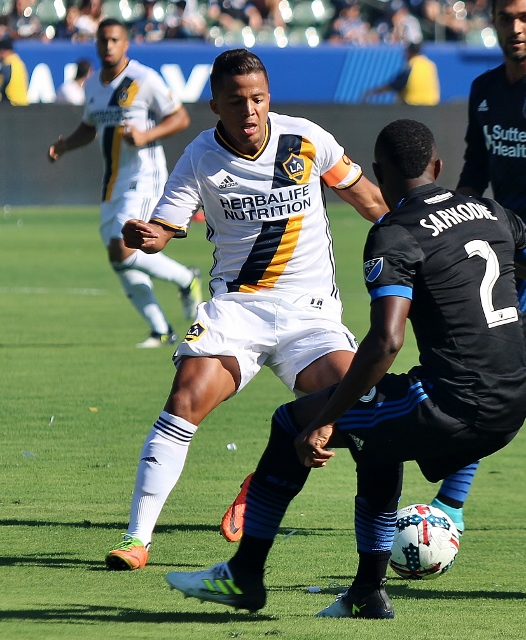 Giovani dos Santos and the Galaxy struggled to find a way through the San Jose defense. (Photo by Duane Barker)

(Carson) – San Jose scored once in additional time in the first half and added two more in the second half to shut out the Galaxy 3-0 Sunday in the California Clasico before 19,237 at StubHub Center.

After going scoreless in the first 45 minutes, two  minutes of additional time were added in the first half and San Jose took advantage when Valeri Qazaishvii rifled one that deflected off Dave Romney and into the net.

“Like I said last week if we didn’t have bad luck we would have no luck,” said Galaxy Coach Sigi Schmid. “I was unhappy of taking that goal when we did. I think 25 percent of of our goals have occurred in the last 15 minutes of a half. This is two games in a row now we have taken three goals right at the end of a half or at full time. That’s just a lack of concentration” 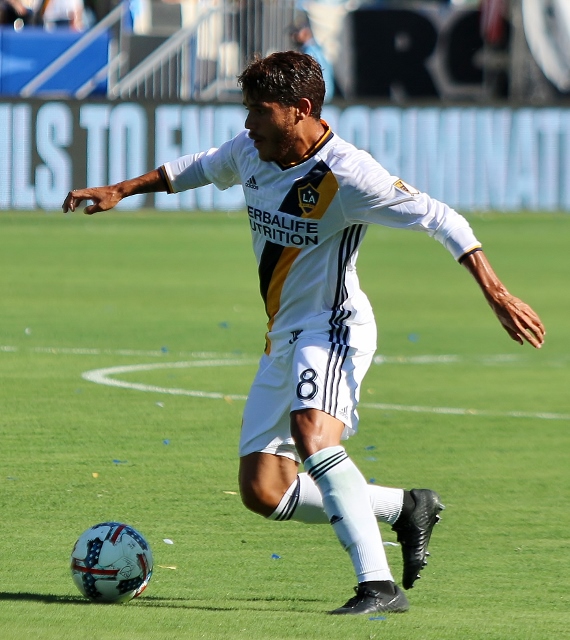 Jonathan do Santos shot that hit the crossbar was the closest the Galaxy came to scoring. (Photo by Duane Barker)

The Earthquakes looked to score early when San Jose’s Marco Urena had an absolute break away in the eight minute but fired it wide left.

On the 14th minute, Giovani dos Santos got free for LA on the right flank and was ready to boot but the ball was knocked away just in time by Kofi Sarkodie.

In the 21st minute Fatai Alashe picked up a yellow card for a hard challenge to set up a Galaxy free kick but the shot was cleared.

Pele Van Anholt injured his knee during a battle and was replaced by Nathan Smith for LA in the 26th minute of play.

“He’ll have an MRI tomorrow so then we’ll know. It could be serious,” Schmid said.

Urena got another opportunity in the 38th minute right in front but his shot was covered up by Galaxy goalkeeper Jon Kempin. A minute later Daniel Steres received a nice cross at the other end in front of the box but his header sailed high over the Earthquakes’ Andrew Tarbell and over the net.

In the 45th minute Jonathan dos Santos hit the crossbar on a shot from distance. A few seconds later Bradley Diallo picked up a yellow card for a heavy challenge.

The Galaxy were down to ten men when Smith was hit with a red card in the 56th minute of play for a challenge on Andres Imperiale.

Ariel Lassiter replaced Bradford Jamieson in the 63d minute. Gyasi Zardes had an attempt at a shot as he raced up the right side in the 68th minute but his run was stopped by a Quake defender.

Jose Villarreal substituted for Emmanuel Boateng in the 70th minute.

San Jose went up 2-0 in the 80th minute when Urena won the the race to the ball with Kempin in front of the box and rolled it into the net effectively icing the game.

Four minutes of additional time were added to the second half. Chris Wondolowski punched one by Kempin on the rebound in that period for the last score of the night.