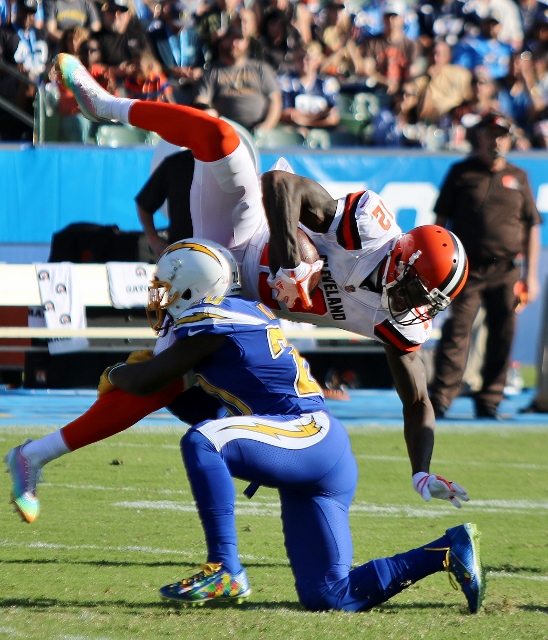 (Carson) – Travis Coons kicked four field goals and the defense did the rest as the Chargers beat Cleveland 19-10 Sunday before a sold out crowd of 25,320 at StubHub Center.

Coons was just signed this week went Nick Novak when down with an injury. Coons actually missed his first one – a 38-yard attempt that hit the upright on the Chargers’ first drive, but he was a perfect four for four after that.

With the victory the Chargers, who started off the season at 0-4, climbed to 6-6 and into a first place tie in the AFC West with Oakland and Kansas City. 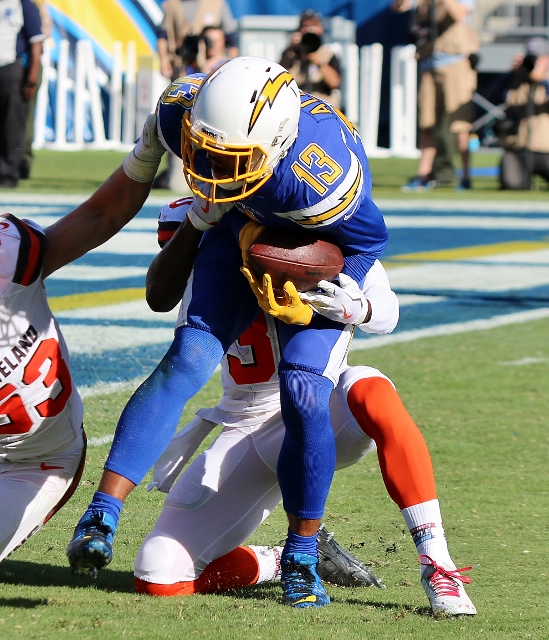 Keenan Allen didn’t score on this one but he did find paydirt against the Browns. (Photo by Duane Barker)

“No one ever flinched. At 0-4 you still have a lot of football left. We had a lot of football in front of us and that’s the way we always looked at it. So to be in this position doesn’t surprise me at all,” said Chargers head coach Anthony Lynn. “Our guys worked hard and they’re committed to the process and they never stopped believing.”

After missing the first one, Coons booted a 21-yarder in the second quarter when another drive stalled to put the Chargers up 3-0. That three pointer was set up when LA stopped Cleveland on a fourth down at the Chargers 37.

Cleveland punted again and the Chargers again moved into Browns territory where Coons kicked his second of the day – this time from 40 yards out for a 6-0 lead.

The Browns responded with a five-play, 65-yard drive. DeShone Kizer hit David Njoku on a 28-yard touchdown pass to put Cleveland up 7-6 with 1:55 left in the second quarter. 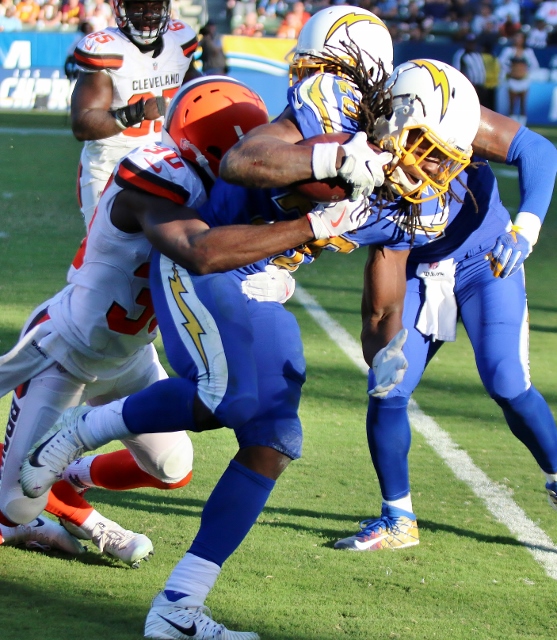 Philip Rivers led the Chargers down the field but the drive stalled at the Cleveland five-yard line where Coons kicked a 22-yard field goal as time expired on the first half giving LA a 9-7 lead heading into the break.

The Chargers came out in the second half and went to work right away. They completed a 10-play, 78-yard drive to begin the third. Rivers fired a seven-yard TD strike to Keenan Allen in the back of the endzone to provide a little breathing room at 16-7.

With 1:02 left in the third quarter, Coons booted his fourth of the day from 27 yards out when the  drive stalled at the Cleveland nine.

The Browns went 58 yards in 11 plays before stalling at the Charger 17 yard line. Zane Gonzalez split the uprights from 35 yards out to cut the LA lead to 19-10 early in the fourth quarter. 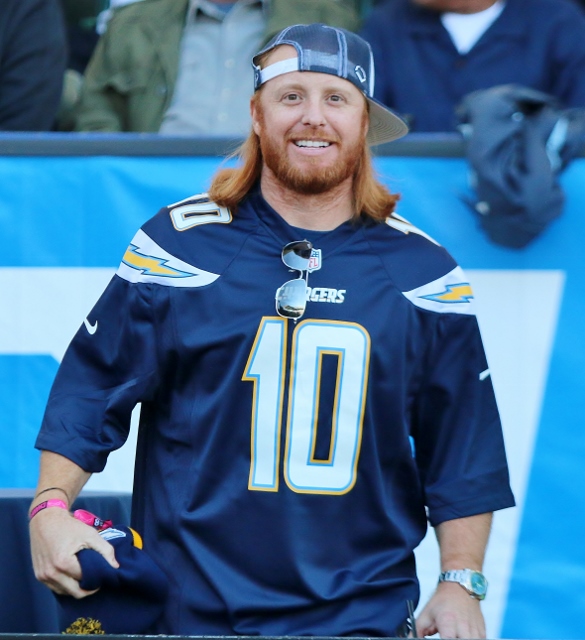 The Browns moved the ball all the way down to the Charger 15 yard line later in the fourth quarter, but on third down Kizer was hit, the ball popped loose and Denzel Perryman fell on it to stop the threat with 4:48 left.

The Chargers had to punt and Cleveland got the ball back one more time only to turn it over one more time. Kizer was picked off by Adrian Phillips in Charger territory and LA ran out the clock.

“We’ve certainly have come a long way from 0-4. We’ve dug ourselves out to above ground, but we still have work to do,” Rivers said. “It’s exciting to know that there are three teams at 6-6 with four games to play. When you start 0-4 and the division leader starts 5-0 it’s going to be tough to even have a chance but here we are with a chance and we just have to keep a narrow focus.”

Rivers was also impressed with Coons’ four field goals in his first time out.

“He missed the first one today and then had one that got blocked however it went through. It looked like a pass going through the goal post. He did do a nice job of settling in and making them. Shoot he made the rest of them and the PAT. If you got a bolt on your helmet and you’re out there you believe in your teammate,” Rivers said.

Rivers completed 31 of 43 for 344 yards and a touchdown with no interceptions. Keenan Allen, who has had over 500 yards receiving in his last three games, had 10 catches for 105 yards and a score. Melvin Gordon led the team in rushing with 77 yards on 10 carries.

For the Browns Kizer was 15 of 32 for 215 yards and a touchdown but was hurt by the late interception. Josh Gordon, who was playing for the first time time in three years, had four receptions for 85 yards.
Cleveland is still searching for its first victory of 2017 as it fell to 0-12.

Next up for the Chargers is a home game next Sunday against the Washington Redskins.

(11712)
$59.99 (as of n/a - More infoProduct prices and availability are accurate as of the date/time indicated and are subject to change. Any price and availability information displayed on [relevant Amazon Site(s), as applicable] at the time of purchase will apply to the purchase of this product.)

(14135)
$12.99 (as of n/a - More infoProduct prices and availability are accurate as of the date/time indicated and are subject to change. Any price and availability information displayed on [relevant Amazon Site(s), as applicable] at the time of purchase will apply to the purchase of this product.)