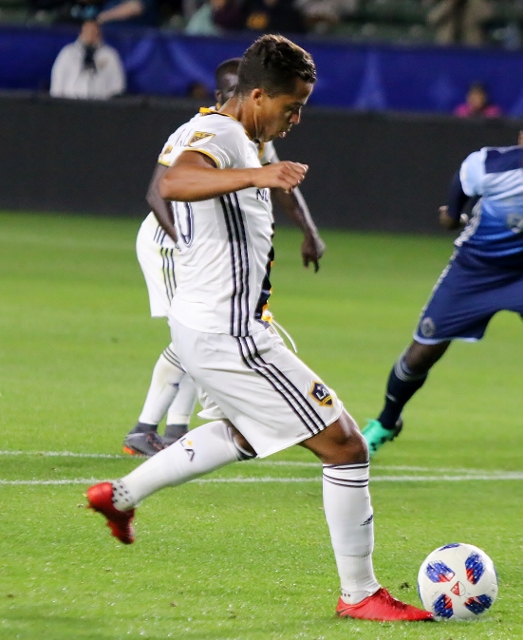 Giovani dos Santos’ scored the Galaxy’s only goal on a penalty kick in the second half. (Photo by Duane Barker.)

(Carson) -Vancouver scored once in each half and it proved to be enough to beat the Galaxy 2-1 Saturday night in the preseason finale before 9,020 at StubHub Center.

The Galaxy had a few opportunities in the first half but couldn’t cash in. Ola Kamara had a shot in the fifth minute but his boot sailed wide right. Three minutes later Perry Kitchen was stopped right in front of the net by Vancouver goalkeeper Stefan Marinovic.

The other Kamara (Kei) for the Whitecaps blasted a penalty kick by Galaxy keeper David Bingham in the 20th minute to give Vancouver a 1-0 lead. The goal was set up when LA’s Joao Pedro took down Christian Techera for the penalty.

Kamara had a golden opportunity in the 30th minute on a break away but instead of blasting away he tried to chip one over the head of Marinovic who came out to make the play. 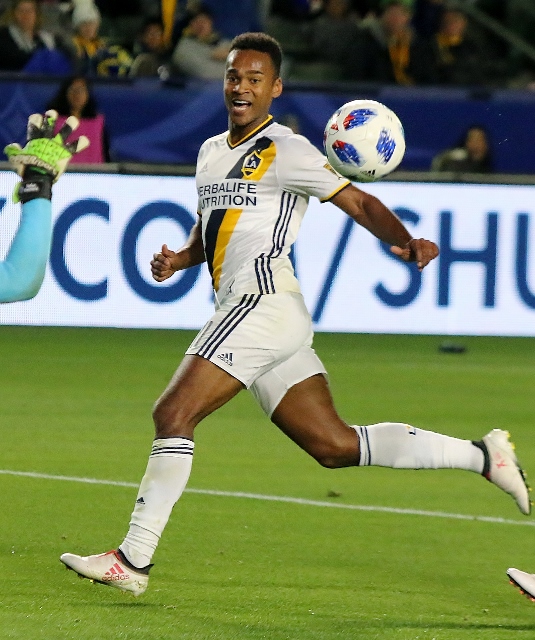 Ola Kamara had a golden opportunity in the second half but came up a little short. (Photo by Duane Barker.)

Pedro limped off the field in the 38th minute and was replaced by Servando Carrasco. The Whitecaps took the 1-0 lead into the break.

Alphonso Davies made it 2-0 in the 52nd when he beat Bingham at the near post.

The Galaxy finally got on the board in the 66th minute of play when Giovani dos Santos scored on a penalty kick. Alessandrini was hit on an overhead kick and it was ruled a Vancouver penalty to give dos Santos the shot.

Sebastian Lletget replaced Emmanuel Boateng for the Galaxy in the 68th. LA was unable to get the tying goal across the rest of the way.

The Galaxy outshot the Whitecaps 14-5 and had seven shots on goal compared to two for Vancouver but still came up a buck short.

“I can’t be displeased with how we played. I thought defensively we were much better today. Defensively we were better and our recovery was better so I was happy with that,” said Galaxy Coach Sigi Schmid. “And offensively we created chances so it’s a matter of one day those chances will fall.”

The Galaxy finished the preseason at 2-4. They will open the 2018 regular season next Sunday night, March 4th against the Portland Timbers at StubHub Center at 7:00p.m.

2 Comments to "Galaxy Comes up Short in Preseason Finale"