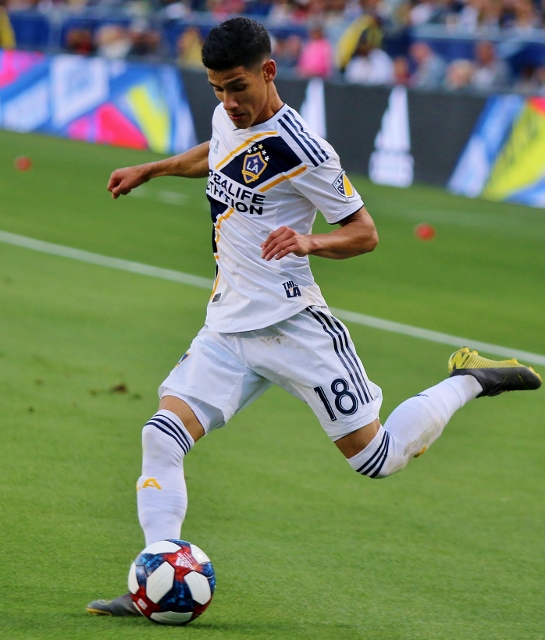 Uriel Antuna records his first goal of the season in the Galaxy win over Real Salt Lake. (Photo by Duane Barker)

(Carson) – Zlatan Ibrahimovic scored in the 78th minute to give the Galaxy a 2-1 win over Real Salt Lake Sunday before 20,615 at Dignity Health Sports Park.

The Galaxy drew first blood in the 16th minute when Chris Pontius hit a wide open Uriel Antuna on a cross who found the back of the net for a 1-0 LA advantage.

A minute later David Bingham made a save for the Galaxy at the other end.

In he 24th minute Sebastian Lletget’s shot on goal was saved by Andrew Putna for Real Salt Lake. In the 27th Cory Baird had a shot at the net but it was right at Bingham and he easily corralled it.

The Galaxy continued to attack late in the second half. In the 34th minute Ibrahimovic’s pass inside set up Pontius but his attempt was knocked away. Two minutes later a header by Pontius just outside the box sailed high.

In the 38th minute it appeared Antuna was fouled by Putna but he was ruled offside. Lletget’s header was on target but also flew high in the 44th minute. 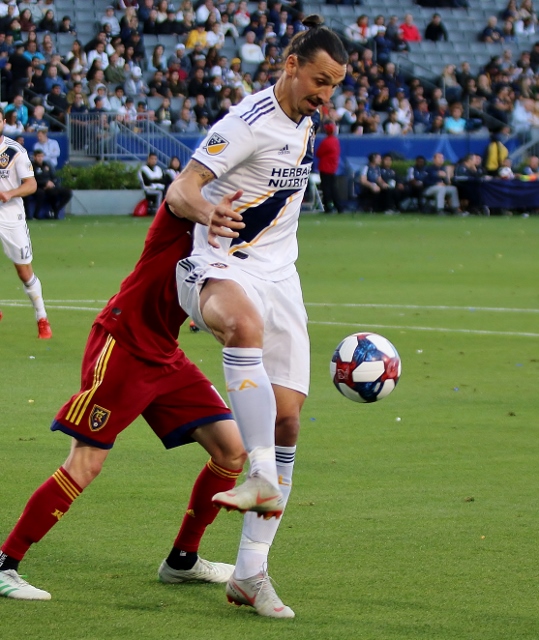 Another game another goal for Zlatan! (Photo by Duane Barker)

One minute of additional time was added in the first half  but nothing else came across as  LA took the one goal advantage into the break.

The Galaxy outshot Real Salt Lake 8-4 in the first half.

In the second half in the 60th minute Ibrahimovic knocked down Nedhum Onuoha and was called for a yellow card. Four minutes later Real Salt Lake got even on a rebound goal by Donny Toia. Bingham made a save on a kick from distance but Toia was there to clean it up.

In the 78th Ibrahimovic scored the game winner as he pushed aside a defender, picked up a pass from Lletget and side kicked it by Putna to put the Galaxy back on top 2-1.

Four minutes of additional time were added but the Galaxy had enough to hold on. With the victory the Galaxy continued its hot start improving to 7-1-1 on the year. Real Salt Lake fell to 3-5-1.