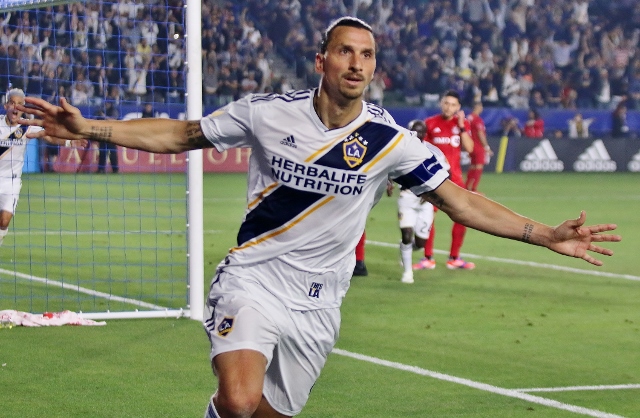 Zlatan Ibrahimovic scored twice in the second half to spark the Galaxy. (Photo by Duane Barker).

(Carson) – Zlatan Ibrahimovic provided the fourth of July fireworks with two goals in the second half to spark the Galaxy to a 2-0 win over Toronto FC Thursday night before a capacity crowd at Dignity Health Sports Park.

Both teams struggled to get anything going early and well into the second half before the Galaxy finally came alive.

The Galaxy had an opportunity early but Emmanuel Boateng’s shot was just wide right in the third minute.

In the 22nd minute Boateng’s cross set up Julian Araujo but his shot hit the right post. Joe Corona fielded the rebound and had a good look but his kick was saved by Toronto’s Quentin Westberg.

Toronto had a chance to go up in the 42nd minute but a shot was high over the net. Two minutes later Corona was fouled hard and appeared to have injured his knee, but he was able to shake it off and stay in the game.

One minute of additional time was added before the two teams went into the break in a scoreless tie. Toronto had just four total shots in the first half compared to three for the Galaxy.

In the 62nd minute Zlatan Ibrahimovic received a pass in front and was in good position but his attempt on goal sailed high over the bar.

The Galaxy broke through in the 75th minute when Efrain Alvarez set up Ibrahimovic with a nice cross pass and he headed it in from right side for a 1-0 lead.

In the 76th minute Diego Polenta was hit with a yellow card.

Ibrahimovic added one more in the 89th minute as he got behind the Toronto defense, picked up a pass from Emil Cuello who replaced Boateng in the 81st minute, and beat Westberg.

Three minutes of additional time were added but the two goals were more than enough.