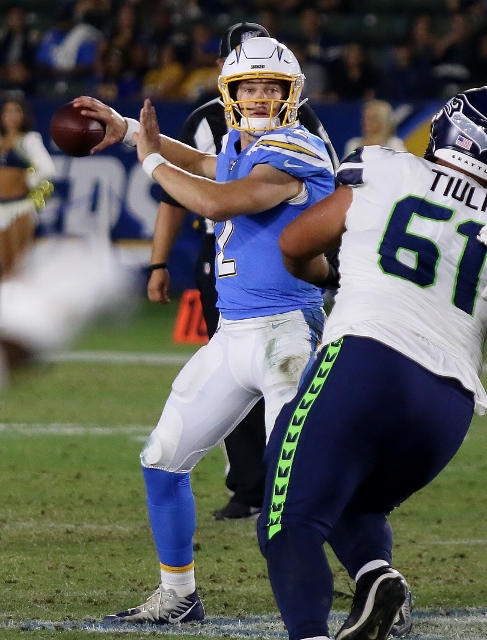 Easton Stick threw for a touchdown and ran for one for the Chargers. (Photo by Duane Barker).

(Carson) – The Chargers fell behind 16-3 in the first half and could never recover in a 23-15 loss to Seattle Saturday night at Dignity Health Sports Park.The Chargers were down by 20 in the third quarter before rallying to get within one score late in the fourth. But that was as close as they could get and the Seahawks held on.

Tyrod Taylor started for the Chargers and they scored first on a 40-yard field goal by Michael Badgley with 2:59 left in the first quarter.

Seattle countered with a 12 play, 84-yard drive that Norwalk’s own Rashaad Penny capped with a three-yard run. After a short Chargers punt the Seahawks with Russell Wilson leading the way, cashed in again. They went 45 yards on 7 plays with C.J. Prosise scoring from a yard out. The extra point was missed leaving Seattle with a 13-3 lead.

Norwalk’s own Rashaad Penny scored on a three-yard run for the Seahawks. (Photo by Duane Barker).

Geno Smith took over for Wilson and engineered a drive into LA territory. Jason Myers booted a 58-yard field with two seconds left in the first half to give the Seahawks a 16-3 lead at the break.

The Seahawks were stopped on fourth down on the Chargers two yard line on their first possession early in the third quarter. But the Chargers had to punt the ball away after going three and out. The Seahawks then drove 69 yards on 13 plays with Smith scrambling in for an eight-yard touchdown with just 16 seconds left in the third quarter to increase the lead to 23-3.

With Easton Stick now behind center for LA, the Chargers marched 75 yards on 11 plays. Stick connected with Andre Patton for an eight-yard TD strike to cut the Seattle advantage to 23-9 with 9:26 left in the fourth quarter. The extra point attempt sailed wide left. 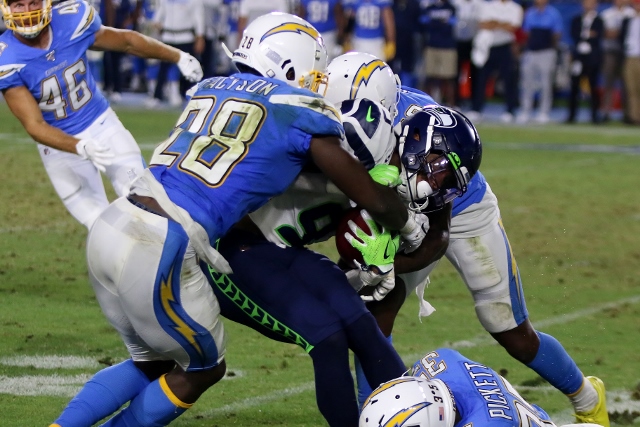 The Chargers had a couple of big hits on defense. (Photo by Duane Barker).

After Seattle was forced to punt, Stick finished a 45 yard drive with a four-yard TD run with 3:22 left in the fourth. The extra point was blocked and the Seahawks maintained a 23-15 lead.

The Chargers got the ball back but were unable to convert on a fourth down and the Seahawks ran out the clock. For the Chargers Taylor, Cardale Jones and Stick combined for 181 yards through the air. Philip Rivers has yet to play a snap.

The Chargers fell to 0-3 in the preseason while the Seahawks improved to 2-1.