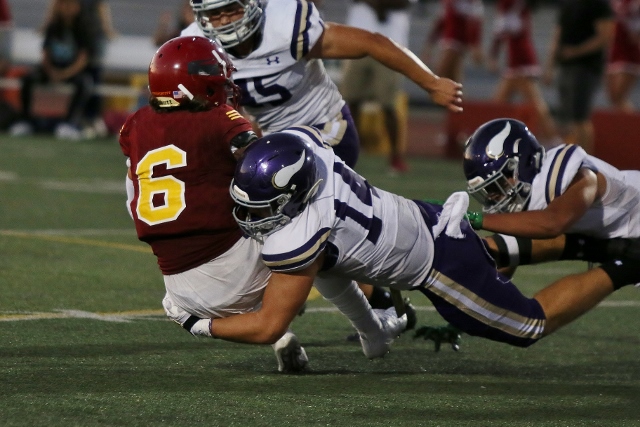 It was a long night for the Apaches against Valencia.

(Arcadia) The Arcadia Apaches took on the Valencia Vikings to open the 2019 high school football season and were handed a 60-7 loss Friday night at Dick Salter Stadium on the campus of Arcadia High School.

The loss could have been much more detrimental to the confidence of the Apaches if not for a running clock for the entire second half and and the Valencia coaching staff giving some time to the younger players.

It didn’t take long for the Vikings to get on the board when Christian Alcantar took the opening kick off back 91 yards for the score. With only 13 seconds off the clock Valencia led 7-0.

Arcadia’s first drive resulted in a punt that gave the Vikings great field position at the Apache 34. Two plays later Arcadia found themselves in a 14-0 hole. Quarterback Ryan Morrison found Hunter Koch in the endzone from 6-yards away. 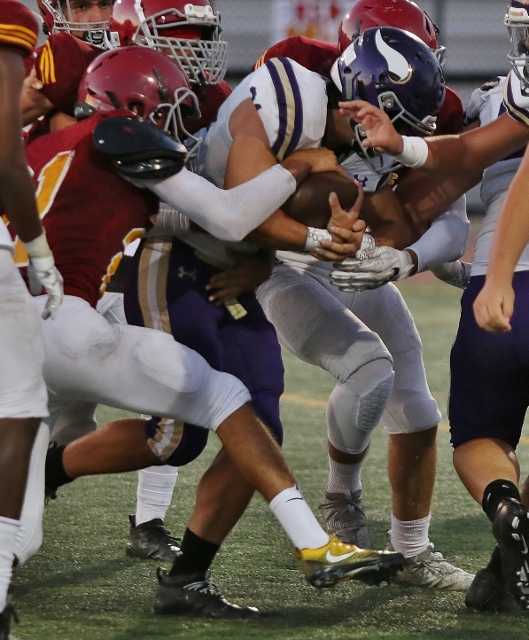 Jake Santos ran through and around the Apaches.

Valencia found paydirt four more times before time ran out in the opening period while Arcadia struggled to get any traction or move the ball consistently.

The second quarter was much like the first as the Vikings pushed the score to 60-0 as the teams headed in to the locker rooms at the break.

Included in the score fest were a interception return for a score by Jack Santos and a 39-yard field goal by Ty Morrison.

The Apaches did manage a lone score with 11:47 to play completing a 2-play 35 yard drive.

Things don’t get much easier for Arcadia as they travel south to the City of Whittier to take on La Serna in a non-league matchup.