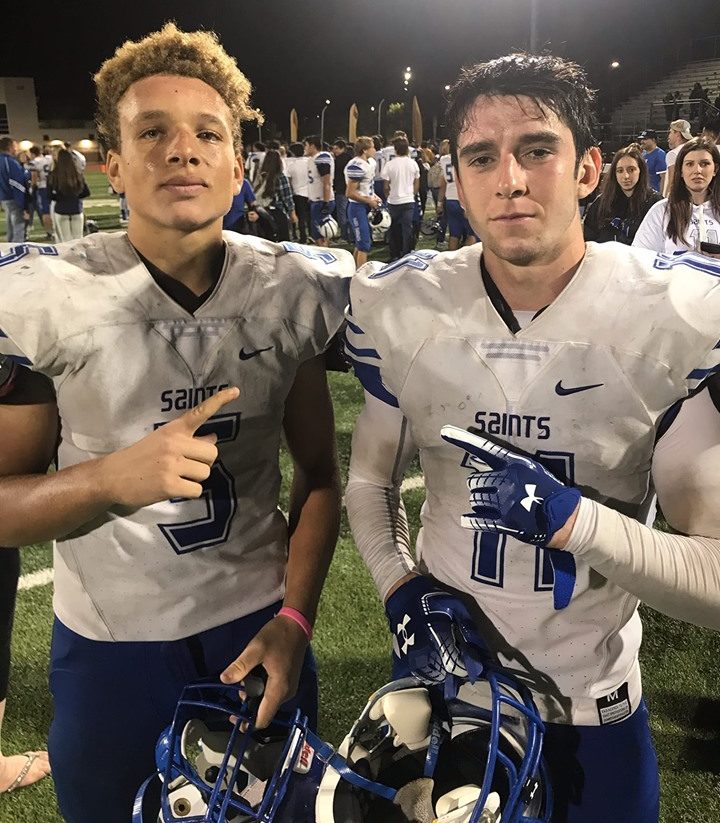 “It feels great. We’re so excited about this. No one counted us to win this,” Said Wallace after the game. “We were definitely the underdog and just to win this is a big deal for us.”

At first, San Dimas struggled coming out of the gate. The defense allowed a James Jimenez touchdown pass, three plays into their opening drive, and then Miguel Jaramillo booted a 34-yard field goal, which ultimately put them in a 10-0 deficit with about two minutes left in the second quarter.

However, just as intermission was approaching, the Saints raddled off 14 straight points within six seconds. With 23 seconds remaining, Nick Cuda took the handoff and squeaked his way in the end zone for six.

Following the score, and after a successful onside kick, Ryan Bulick faked the defense and connected with Cuda alone in the flat, who then took it the distance for the score and a 14-10 lead.

With the momentum that the Saints built, it carried into the second half, and it continued it on their opening possession. After 11 plays, Wallace capped the drive when he was on the receiving end of Bulick’s screen pass, extending the lead to 20-10 after the missed PAT.

The Vikings tried to storm back with the no-huddle offense on the ensuing drive, and it worked until they got into the red zone when Wallace picked Jimenez’s pass, halting the drive. Northview had another opportunity to add points on the board, but the defense stuffed them, forcing the Vikings for three points.

As time was winding down in the fourth quarter, Cuda sealed the game away with his 43-yard touchdown run, ending any chances of a Northview comeback.

“You have to thank the hogs,” said Cuda on tonight’s performance. “Thank the hogs. They make the holes for us, and all we do is run through them.”

With the win, San Dimas will look to extend their win streak to four games next week when they host Baldwin Park while Northview looks to bounce back when they play Wilson at Covina District field next Friday night.

6 Comments to "Cuda, Wallace and San Dimas Victorious Over Vikings"