Joe T…On this day in 1973 the Mets were in last place & still ended up in Game Seven of the World Series.

There’ll be coaches for roasting
Sportswriters for toasting
And complaining ‘bout the quarterback’s poor throws
There’ll be scary locker room stories
And tales of the glories of
Gridiron greats long, long ago…”

Right off the Top: Oh, have I mentioned that I have always been a Yoenis Cespedes fan?

“I personally like Tim Tebow but…” Is the most overused line by the sports media. Nothing but, “buts’…

“…but I hope he doesn’t make it because I don’t want to deal with is faith.”
“…but he’s only getting this tryout because he’s Tim Tebow.”
“…but he’s a circus.”
“…but he’s not a good quarterback.”
“…but who’s he kidding if he thinks he can play baseball?”
“…but I’m going to have a problem if he starts preaching.”
“…but what’s he going to do, stop and pray after hitting a home run?”

There are more buts in a Tebow media discussion than a Sir Mix-A-Lot video.

Did you know that South Pasadena’s 35-20 victory over Rosemead, Friday night was the Tigers first win over the Panthers since 1976?

That night, November 5, 1976, South Pas came into the game 7-0 and needed a win and a Temple City loss to San Marino to capture the Rio Hondo League title outright.

The Titans beat the Rams and then, after a scoreless first half, the Tigers got a 20-yard scoop and score from Dave McLerney and a 10-yard touchdown run from Robbie Chapman to take a 14-0 victory.

How’s that for research?

Colin Kaepernick can say and do anything he wants. You can’t be forced to do anything—except buy health insurance—in this country you don’t want to do.

Now if he can figure out a way to sit in the pocket and read defenses…Then you’ve got something.

Remember when Daniel Nava was the Gary Sanchez of Tempe Diablo this Spring for the Angels?

After being sold, now he’s just the Daniel Nava of the Kansas City Royals.

I guess the talk of Sean Mannion becoming the starting quarterback for the Los Angeles Rams is pretty much done now. Didn’t see much traffic on it after Saturday night.

Looking forward to Hard Knocks (yeah, I know, so is Peterson)…I wonder if they’ll show fourth string quarterback Dylan Thompson getting cut…I’d love to be Thompson. Put on the uniform, throw the football, be in on all the discussions, and then never take a hit…Man, I want to be that guy.

***
What happened to other gear at Dodger games?

I have a distinct memory of going to Dodger Stadium as a kid and seeing gear from other MLB teams on sale. Now instead of being able to purchase a Phillies cap, I have to choose between a pink, red, plaid, or cardinal & gold Dodger hat.

Why would you buy a Dodger hat if it wasn’t blue?

I certainly wouldn’t buy a Mets hat if it was green.

***
Burbank has become a team that is too often overlooked…Ted Amorosi got them on track, Hector Valencia took them to the semifinals…and now Richard Broussard has them winning against quality teams…each time there’s a coaching change we keep thinking it’s the end of the ride for the Bulldogs but they always find a way.

Remember a couple of years ago they were one minute, a bad punt, and a Frankie Palmer away from going to the CIF Finals. 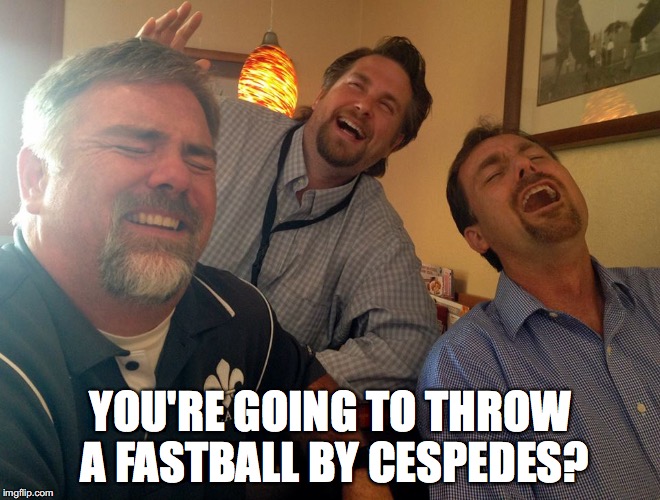 Arroyo’s 17-17 tie with Covina was the school’s first since a 14-14 tie with University, September 19, 1997. Legendary Knights quarterback Kenny Smith threw for 273 yards and a pair of touchdowns. Arroyo secured the tie by blocking a 42-yard field goal attempt with 12 seconds left in the fourth quarter.

Last Add Tebow: If you think he sucks, just say he sucks. Based on my personal relationship with the Creator I can promise you, you will not go to Hell if you think Tim Tebow sucks as a quarterback or as a corner outfielder.

He deserves a chance to fail. So let him fail.

He never got the chance to fail in football…and that’s why his story keeps going.

(I know I’m missing somebody)

I appreciate Tony Romo’s toughness and he’s been a really good (not great) quarterback over the years…but isn’t it time? I know Dallas Cowboys fans don’t want to hear it…I’m sure they fear an Austin Davis in their future, but it’s time to sober up and face reality.

Note to Temple City Fans: The loss to Pasadena Poly in the opener was far from its worst. The Rams have not won a season opener since 2008 when Morgan Hatch threw four touchdown passes. Two to Gianni Bruno-Lopez and a 60-yarder to Kenny Werner (Joey Stewart caught the other).

The last time TC beat a team that wasn’t Arroyo in an opener happened 31 years ago when they took down San Gabriel, 23-6.

Last Add Dodgers: I was at the Dodger game on Saturday and got blacked out there…Do people not understand the concept of getting out of the way? Do they understand that they are not supposed to stand in the aisle and have a phone conversation?

Midbits (same as ‘Tidbits’)
Midbits: Hey! Do a bro a solid…Read the August 25th edition of Fanview…No one else has…

Midbits: Who’s been a bigger bust in 2016? Jeb Bush’s presidential campaign or Jason Heyward with the Chicago Cubs?

Midbits: Arroyo’s Jason Villa became the first Knights quarterback to start the season wearing a number other than “10” since Austin McFarland wore “7” in the team’s 2008 opener at Temple City.

McFarland broke his arm in the first half and His Arroyo Baldness brought in some freshman that was wearing number “10”.

Villa wore number “3” and finished the game…playing both sides of the ball.

Midbits: “Comparing Colin Kaepernick’s “stand” against injustice/oppression to what Jackie Robinson and Muhammad Ali went through is like comparing his career to Tom Brady or Peyton Manning.”—Big George Hernandez

Midbits: I can crush Gary Sanchez Mania in a heartbeat…I’ll just add the New York Yankees catcher to my fantasy baseball roster…I’m sure some of you have this power as well.