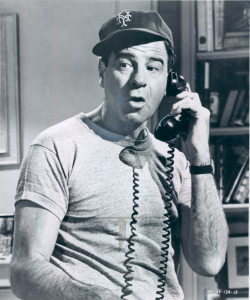 “What’s that? Oh, the Mets are back in the playoffs…Awesome, looking forward to crushing Dodger dreams in October.”

“The Earth has a fever.”—Al Gore

Right off the Top: With Carolina opening the NFL season in Denver tonight…Can prep stadium announcers avoid sharing the score of this game?

It’s called a DVR…and most of us have them.

I hammer this point every year, it’s a PSA that needs to be repeated over and over…I despise Thursday night high school football for this one reason.

“We have an update from Dodger Stadium…”

And the one that really grinds my gears…

“If you’re recording tonight’s playoff game, you might want to cover your ears…” At which point you’ll hear the announcer giggle and then give the score.

Guantanamo is too good for people that commit such crimes.

Former Cantwell quarterback Matt Valencia will start for the Whittier Poets on Saturday against Whitworth College…Former Arcadia running back Bradley Mills is on the Whitworth roster.

A feeling…call it a hunch (Ba-dum chi!)…is saying, don’t write off Sam Bradford.

The Vikings may have salvaged their season with this deal.

…And some are actually saying (NFL Network) that Shaun Hill is a better fit than Bradford. I’m a Rams fan, I’ve seen Shaun Hill, studied Shaun Hill…Shaun Hill is not Sam Bradford. 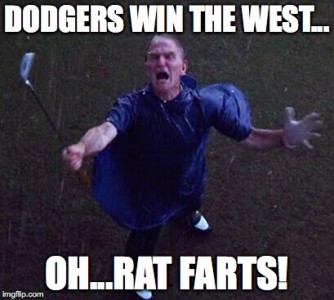 After the New York Mets (and the Cleveland Indians) my whole desire this baseball season has been to see a major collapse by the Los Angeles Dodgers.

Then a thought occurred to me…The Giants are usually at their best against the Dodgers when they have nothing to play for. When they revert to their Johnnie LeMaster form of the 70’s & 80’s and play spoiler…

…Unfortunately for this theory to play out the Colorado Rockies are going to have to go on a serious run. So basically…it’s not happening…The Dodgers are going to win the West.

On this date in 2006, Temple City defeated Arroyo, 35-14 at North Field. Dwight Broadnax rushed for 242 yards, scored two touchdowns, and picked off a pass. Linebacker Joe Reasner (Bad Dude) was in on nine tackles and registered three sacks.

Last Add Dodgers: I’d like to thank them for dealing Jharel Cotton to the Oakland A’s for Josh Reddick…He had a heck of a start for my fantasy team yesterday.

***
Monrovia and Arcadia have met 35 times in football. The first time was in 1954 and the Wildcats won 40-0. The last time was a year ago in a 60-45 shootout at Salter Stadium (Is it still called, Salter Stadium?)

This is the eleventh consecutive meeting between the schools (Wildcats lead all-time: 21-14) but Arcadia has not won at Monrovia since 2007 when Troy Amhaz rushed for 254 yards and a pair of touchdowns in a 41-20 victory.

M-Town won the schools six meetings in the 1950’s (1954-1959) but Arcadia got its first win on November 18, 1960. The Wildcats were riding a 17-game regular season winning streak but the Apaches were playing to secure their first playoff birth.

Estimates say 14,000 people were in the stands that night, along with another 2,000 standing, to see Arcadia at home score a 26-13 victory and earn a playoff date against Anaheim. (“Fog Game” at La Palma Stadium, Apaches lost 13-12).

I know, I can be ridiculously hypercritical about some things in sports…like stadium announcers & Time Warner…but has anybody noticed the level of common, pedestrian, analysis on the NFL Network (mainly the morning show)?

It’s hard to watch sometimes because their conclusions seem to have no nuance or thought and always are the most basic…whatever.

I’ve been trying to find a good Los Angeles Rams podcast. If you know of one, send it my way. I’ve listened to Rams’ podcasts with good production, but like I just said about the NFL Network, the guys talking sound like idiots to anyone with an ear for sports.

His partner said he was out and missed the Rams first two drives of the game. Meaning he missed the best part of Jared Goff’s performance and was now ready to critique Jared Goff.

They couldn’t DVR it?

Believe it or not…I watch very little political talk because it’s stupid and goes round and round…I no longer listen to sports talk on the radio because it’s as unbearable to hear as the NBA is to watch.

I can understand someone making a mistake…but preparation…there’s no excuse for not being prepared…A football coach can make a mistake…A coach can be caught in a lurch between going for two or one…But to say he skipped film? Skipped a coaches meeting?

They don’t do that…so how can somebody who intends to comment on what players do, not be equally diligent?

Last Add Stadium Announcers: Now if the announcers were reading off scores just to be mangy, cheap, dirtbags…I could live with it…I could almost come to respect it and laugh with them…But that’s not the impression they give. When announcers read scores it comes across as if they feel they are giving us all scoop, scoop that we have to hear…Nobody thinks they’re more like God on earth than Politicians, DMV employees, and Stadium Announcers.

Last Add Sports Talk: When the Rams were in St. Louis there was a podcast called “Rams Addiction”…The guys weren’t entertaining but they were prepared and gave great information.

Midbits: Before the “Tim Tebow is keeping someone else from getting a shot” rants kick in…Remember the Dodgers once upon a time drafted a pitcher, Bill Bene (Speaking of Cal State LA), who was so bad they couldn’t even let him throw against live batters…Terry Mulholland kept getting work…and talent evaluators at some time thought sending Sid Fernandez to the Mets for Bob Bailor was a great idea…Of course, we all remember Pedro Martinez for Delino DeShields…You know what Lasorda would say about all of these…
“Ain’t my f-bombing fault! Campanis, he’s the f-bombing guy!”