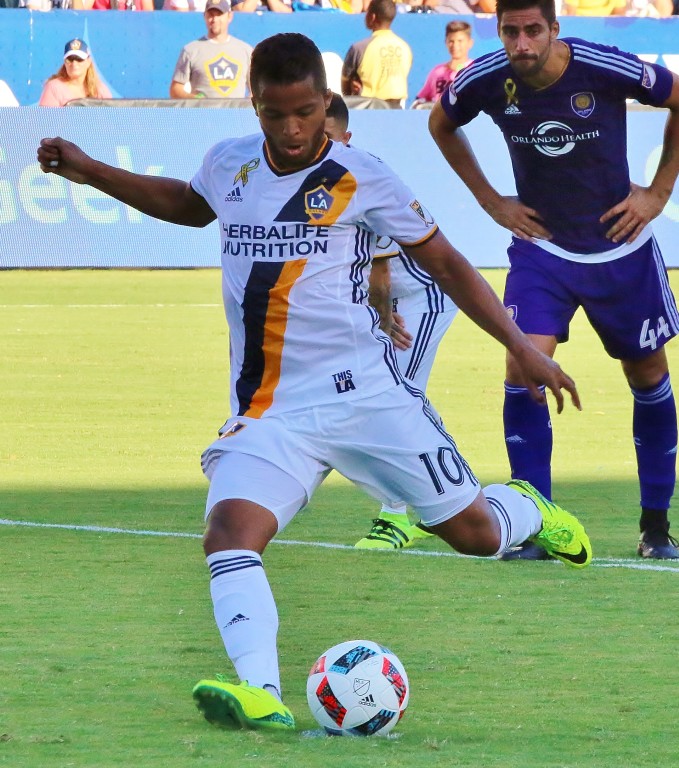 (Carson) – Giovani dos Santos scored twice and the LA Galaxy opened up a 3-1 lead in the first half and went on to beat Orlando City 4-2 Sunday before a sold out crowd of 27,167 at StubHub Center.

The game also marked the return of Landon Donovan who joined the Galaxy this past week after retiring after the championship game in December 2014. Donovan entered the game in the 83rd minute and played the rest of the way.

The LA Galaxy had a couple of golden opportunities 11 minutes in but were unable to cash in. Alan Gordon was thwarted when defenders wrapped him up in front of the box. Also he missed on a redirection off a pass from dos Santos. 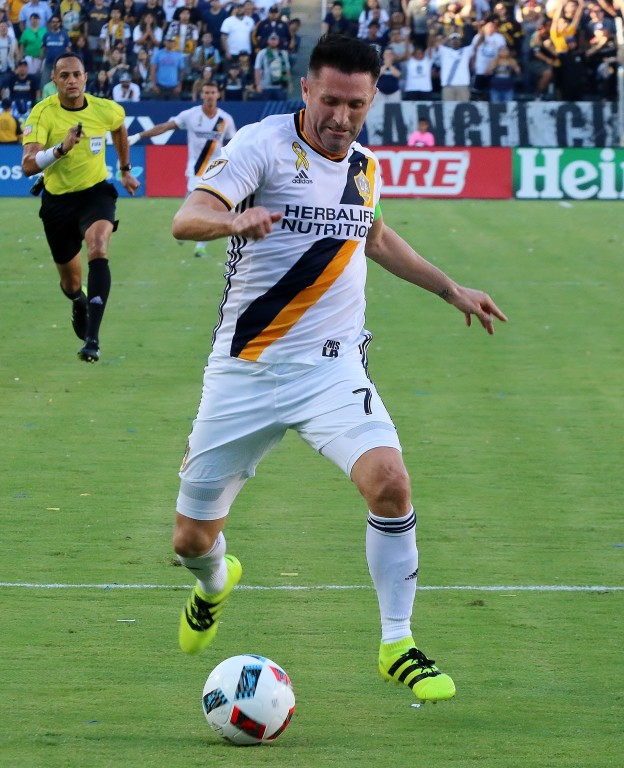 Robbie Keane returned the the pitch in the second half and scored! (Photo by Duane Barker)

Orlando City’s Kevin Molino broke the scoreless tie when he fired shot by Brian Rowe in the 20th minute. Molino scored off a rebound on an attempt by Cyle Larin.

The Galaxy got even in the 35th minute when Emmanuel Boateng rushed the right side and placed a perfect cross to dos Santos who tapped it in. Three minutes later Jelle Van Damme, on the right side found a streaking Alan Gordon in the middle who rammed it by Orlando City goalkeeper Joe Bendik for a 2-1 lead.

Dos Santos made it 3-1 with his second goal of the night in the 45th minute as he blasted a penalty kick by Bendik. The boot was set up when Gordon was knocked down in the box on a breakaway.

Did Alan Gordon draw a penalty on this one? The ref thought so! (Photo by Duane Barker)

Two minutes of additional time were added and LA took a 3-1 lead into the break.

In the second half the Galaxy needed to play fundamental soccer to hold off Orlando City and they were able to do just that.

Keane made his presence felt in the 70th minute when he got behind the defense with dos Santos. Dos Santos took a perfect dish from Sebastian Lletget, who in turn found Keane wide open and he punched it in for the goal.

In the 82nd minute Tony Rocha hit the crossbar for Orlando above the head of LA keeper Brian Rowe.

Then a minute later, the fans got to see what they came for as Donovan, the Galaxy all-time leader in goals, entered the match for Raul Mendiola.

Two minutes of additional time were added and Orlando City cashed in when Brek Shea scored to make it 4-2.

Next up for LA is a road trip to Kansas City next Sunday.