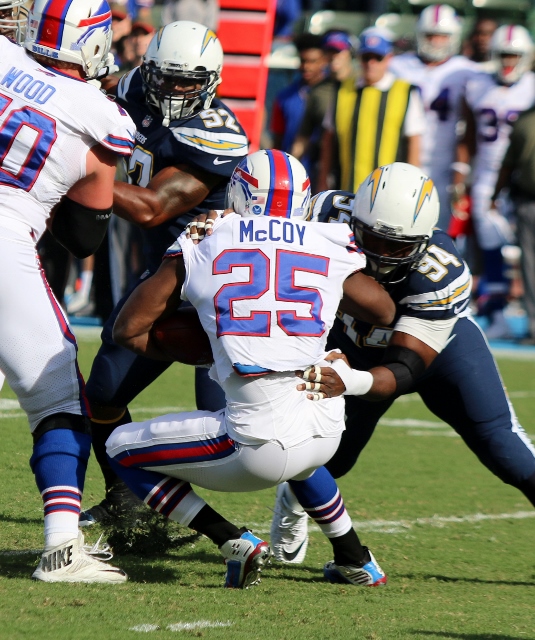 (Carson) – The Chargers intercepted Buffalo quarterback Nathan Peterman five times and went on to rout the Bills 54-24 Sunday before 25,015 at StubHub Center.

Peterman, in his first NFL start, threw all of them in the first half before being replaced by Tyrod Taylor and the Chargers took full advantage taking a 37-7 lead at the break. The Chargers forced Buffalo into six turnovers overall as Taylor also coughed one up for a touchdown.

“Our defense started getting those turnovers last week and sometimes they come in bunches. And they came today in bunches and our offense took advantage of them most of the time,” said Chargers head coach Anthony Lynn. “But you know we got points on defense, that’s great.” 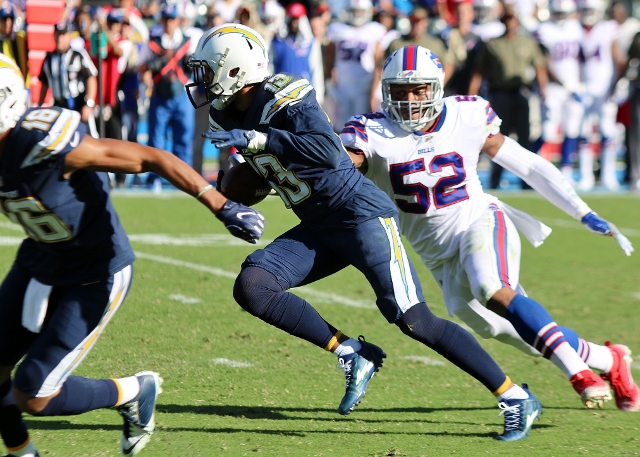 On the first possession of the game Korey Toomer intercepted a deflected pass from Peterman and returned it 59 yards for a touchdown to put the Chargers up 7-0.

Casey Hayward picked off Peterman again on the following possession to set the Chargers up at the Buffalo 31. But Nick Novak missed a 46-yard field goal.

The Bills got the ball back and LeSean McCoy broke off a 37-yard and followed that up with a 27-yard touchdown run to get Buffalo even at seven with 9:02 left in the first quarter. That was the last time the Bills had a look at the game as the Chargers reeled off 33 straight points.

The Chargers drove 59 yards on 12 plays and Novak was true this time as he split the uprights from 33 yards out to put LA back on top 10-7.

Another tipped pass resulted in the third interception by Peterman as Tre Boston corraled it and returned it to the Bill 46 late in the first quarter. The Chargers cashed in on the turnover as Philip Rivers connected with Keenan Allen on a 21-yard TD strike to complete the drive in six plays.

On the next possession Peterman was intercepted for the fourth time when Hayward jumped a route to get his second of the day to set up LA at the Bill 15. Four plays later Rivers found Allen again on a short two-yard touchdown pass. Keenan shook off a tackler and dove into the end zone for a 24-7 advantage. 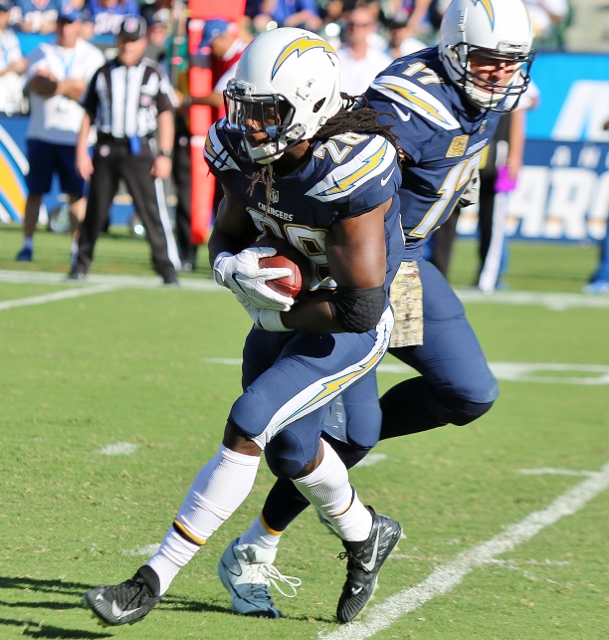 Workman effort from Melvin Gordon with 80 yards and a score. (Photo by Duane Barker)

Buffalo was forced to punt and the Chargers pieced together a nine -play, 66-yard drive that was halted at the Bill 11 where Novak kicked a 28-yard field goal to put LA up by 20.

Melvin Gordon put the finishing touches on a 57-yard drive with a ten-yard touchdown run with 1:09 left in the first half and the rout was officially on at 34-7.

Trevor Williams intercepted Peterman for a fifth time on the next series and LA was in business again with 56 seconds left at the Bill 46. Novak kicked a 39-yard field goal as the clock hit zeroes on the first half with the Chargers in cruise control at 37-7.

Rivers was 16 of 25 for 197 yards and two touchdowns in the first half while Allen had nine receptions for 123 yards and a pair of scores. Gordon had 15 carries for 72 yards.

Peterman was an abysmal 6 of 14 for 66 yards and five interceptions.

The 37 points scored was the most ever by the Chargers in a first half of play breaking the previous mark of 35.

The Chargers picked up right where they left off in the third quarter marching down to the Buffalo 10. The drive stalled but Novak kicked his fourth field goal of the afternoon – this one from 28 yards out for a 40-7 lead.

Taylor replaced Peterman at quarterback for Buffalo in the second half and drove the Bills down into Charger territory. Stephen Hauschka kicked a 50-yard field goal.

On the next possession, Taylor was hit and the ball popped loose, Melvin Ingram scooped it up and rumbled 38 yards for the score to make it 47-10.

Taylor connected with McCoy on a 12-yard touchdown pass early in the fourth quarter to get the Bills back within 30.

Kellen Clemens replaced Rivers at quarterback in the fourth quarter and the Chargers didn’t miss a beat. Austin Ekeler scored on a 21-yard run to cap a 58-yard march as the Chargers passed the 50 mark with a 54-17 lead with 7:57 remaining.

Rivers finished with 251 yards passing and two touchdowns on 20 of 32 with no interceptions. Allen had 12 catches for 159 yards and two scores. The Chargers added 146 yards on the ground.

“The defense obviously helped out quite a bit getting six turnovers and scoring with two of them so we had optimal field position, but we did execute at a much better level offensively,” Rivers said. “We had a much better rhythm and flow.”

Allen found his groove early and kept it throughout the game.

“It’s fun. I told my coach once I get into a groove, once I get that first catch, if it’s early I’m in a groove already. I thought we did a great job of executing today. We didn’t shoot ourselves in the foot at all,” Allen said. “We’re definitely coming together.”

The Chargers improved to 4-6 with the victory, two games behind Kansas City in the AFC West. Buffalo fell t0 5-5.

Kindle Paperwhite – Now Waterproof with more than 2x the Storage

(103224)
$149.99 (as of n/a - More infoProduct prices and availability are accurate as of the date/time indicated and are subject to change. Any price and availability information displayed on [relevant Amazon Site(s), as applicable] at the time of purchase will apply to the purchase of this product.)

(10050)
$11.99 (as of n/a - More infoProduct prices and availability are accurate as of the date/time indicated and are subject to change. Any price and availability information displayed on [relevant Amazon Site(s), as applicable] at the time of purchase will apply to the purchase of this product.)