Tristan Sprague catches the TD pass to tie the score at 49.

(Covina) – The game wasn’t over until the final play. When a pass by Nin Burns II was intercepted with no time remaining on the clock, only then was it clear that Covina had lost 55-49 to Katella in the CIF Division 11 Championship game Friday night at Covina District Field.

Up until then the game was up in the air. In game that was eerily similar to last week’s semi final when the Colts beat Culver City 57-56 in overtime, it was the last team with the ball wins. Well Covina was the last team with the ball but unfortunately for the Covina faithful, the Colts had only 22 seconds to go 65 yards and they just couldn’t pull off one more miracle.

Nin Burns II made big plays with his arm!

Covina had been making big plays all night. While the Colts would score on quick strikes, Katella was almost the polar opposite, moving the ball down the field on time consuming prolonged drives and then punching it in from the red zone.

Covina led only once all night, 28-27 mid way through the third quarter. The Colts were chasing Katella nearly the entire contest before falling a touchdown short.

The game was tied at 35 at the end of three quarters before a wild fourth quarter ensued leaving a standing room only crowd at District Field trying to catch their breath.

Katella took the lead early in the fourth on a 14-yard touchdown run by Miles Poland that capped an 8-play, 69 yard drive. Covina answered with its first long march of the game. The Colts drove 75 yards on nine plays with Ailaoa Tauvao finishing it with a three-yard run to tie it at 42 with 6:53 left. 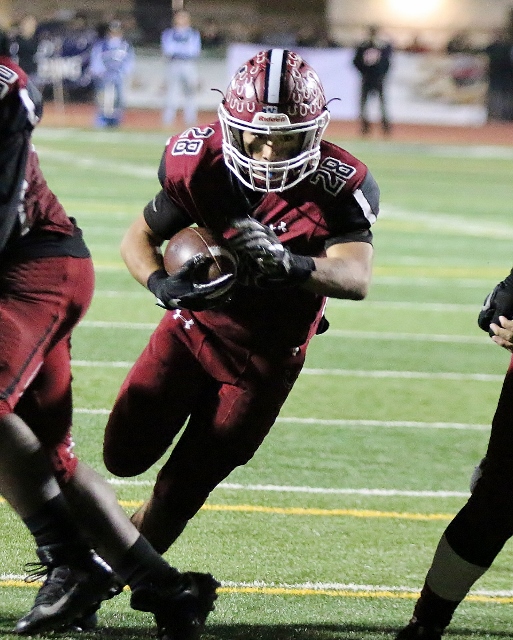 Nathan Arrington hit Eddie Williams for 53 yards down to the Covina ten-yard line. Four plays later Poland bulled in from the two with 22 tics on the clock.

Covina got the ball at the 35 but after two incomplete passes Burns long bomb was picked by James Fraser and the Katella celebration ensued.

Katella took a 21-14 lead into the break when Carlos Guerra caught a short pass, juked past a defender and went 31 yards for a score.

Covina continued to hit on long scoring plays in the third quarter. Cuellar got loose for a 49-yard touchdown run and after Katella took the lead again, Danny Urrea was a blur racing under a 60-yard pass from Burns to make it 28-27. Arrington tied it on a one-yard run and then also scored on a two point conversion to put the Knights up 35-28.

The Colts took advantage of an Arrington fumble at the Katella eight-yard line to set up a touchdown run by Tauvao to tie it at 35 and set up the deciding fourth.

Burns threw for 254 yards and four touchdowns for Covina while Cuellar ran for 166 yards and a score. 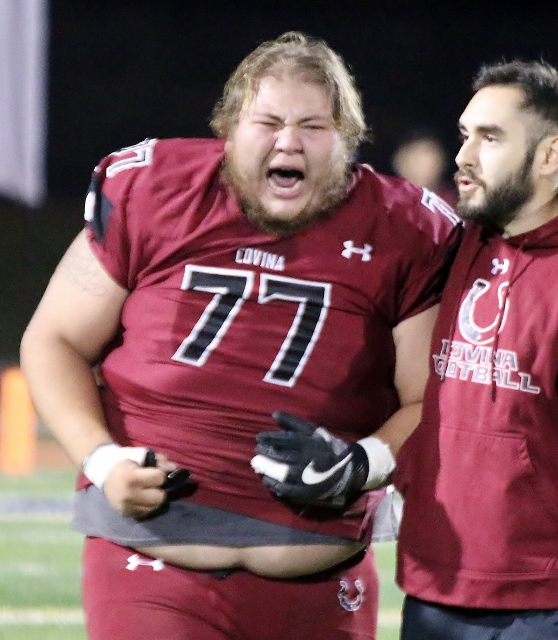 Katella ran for 232 yards overall with Joshua Cedillo rushing for 97 yards on the night. Williams had eight receptions for 143 yards and Guerra had eight for 113. Arrington threw for 328 yards total.

Covina, despite the loss had its best season since 1995 when Nin Burns led the Colts to a CIF title. Covina finished 11-3 overall and Coach Joe Brown acknowledged his troops after the game.

“I want to thank you for giving me the greatest season I’ve ever had as a coach. In 28 years in high school football, you guys have done things that I’ve only dreamed of having teams do,” Brown told his team. “There’s one thing I can’t coach and there’s no drill to have is that fight and you guys showed it to the very end. I love each and every one of you. You got me my first league championship, you got me to my first CIF Championship and I will never forget each and every one of you. And I will take that to the grave. I know it hurts guys. We’re all hurting but it wasn’t a lack of effort or lack of desire.”

And the long off season begins.