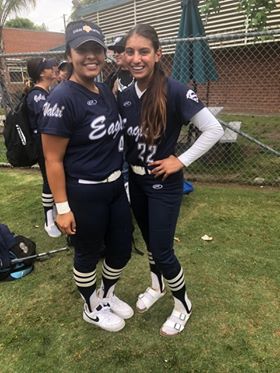 Martinez (left) and Castruita are the one-two punch for the Lady Eagles.

[La Canada] – Chasity Martinez and Nevaeh Castruita again were the difference for South El Monte in its 2-1 victory over La Canada on the road Tuesday in the second round of the CIF Division 4 playoffs.

Castruita was in another pitching duel this time against the Spartans Devyn Cox. Castruita threw a complete game giving up 5-hits, one earned run and striking out nine. Cox gave up just 3-hits, struck out four and gave up two runs.

The Eagles offense came in the third inning with two outs, Castruita stretched a single into a double. Chasity Martinez came up and hit a line drive homerun to dead centerfield making it 2-0 South.

Spartans had a chance to score in the first inning but Eagles freshmen Rachel Leon gunned out La Canada’s Emily Tinkham at the plate from left field. 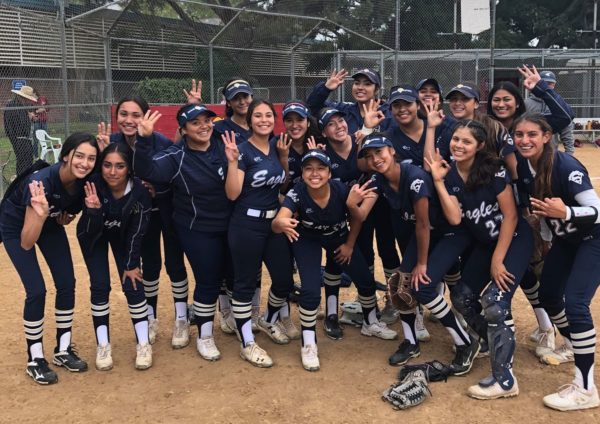 La Canada put a scare in the Lady Eagles in the last inning with one out as Megan Oh hit a double to right-center. Oh scored on a single from Tinkham with two outs. Castruita was able to get the last batter to ground out to secure the victory.

Eagles HC Dean Bunting was pleased. “Nevaeh’s pitching and good defense behind her led us to the victory, Chasity’s homerun of course was the difference and Rachel’s defense in the outfield was outstanding with another great play today.”