(Carson) – Will Lutz kicked a 28-yard field goal with 1:05 left in the fourth quarter to lift the New Orleans Saints to a 19-17 win over the LA Chargers Sunday at Dignity Health Sports Park.

The Chargers got the ball back and had one last shot but Easton Stick was picked off by Colton Jumper to seal the Saints victory.

The Chargers and the Saints both were stopped on fourth down on their initial series to open the game.

After a couple of punts AJ Klein intercepted the Chargers starting quarterback Tyrod Taylor and returned it to the LA 18. After the Saints stalled Lutz booted a 33-yard field goal for a 3-0 New Orleans lead with 3:13 left in the first quarter.

After a Chargers punt and penalty the Saints took over at the 50 and drove down deep into LA territory. But the drive was halted when Jaylen Watkins intercepted Teddy Bridgewater at the two yard line. 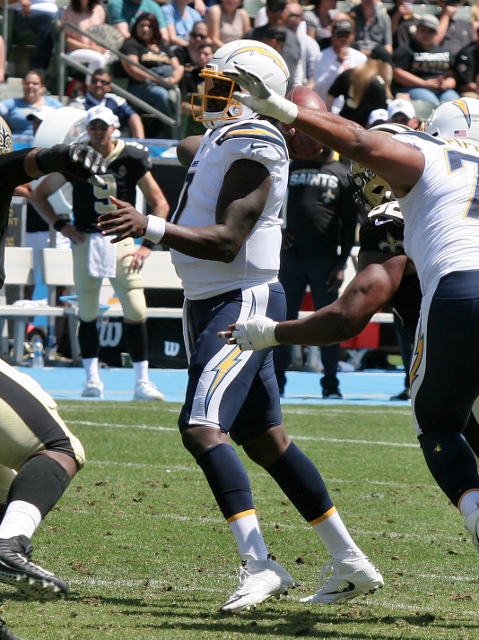 Cardale Jones replaced Taylor at quarterback and engineered a 98-yard Chargers drive capped by a 24-yard touchdown strike from Jones to Andre Patton to put LA on top 7-3 in the second quarter.

On the next Charger series Michael Badgley kicked a 32-yard field goal to make it 10-3. It appeared that the Chargers would take the seven point lead into the break but the Saints were forced to punt and Troymaine Pope fielded the kick, found a seam and raced 81-yards for the score with three seconds left in the half.

The Chargers took the 17-3 lead into halftime.

After the teams exchanged punts on each of their two series in the third quarter New Orleans struck on its third. Taysom Hill, who replaced Bridgewater, found a wide open Austin Carr for a 27-yard touchdown to cap a 60-yard march. Lutz’ extra point cut the Charger lead to 17-10 late in the third.

On the ensuing drive the Saints moved the ball down inside the LA ten yard line but running back Devine Ozigbo was popped by Denzel Perryman, the ball came loose and Adarius Pickett fell on it at the Charger nine yard line to stop the threat early in the fourth quarter. 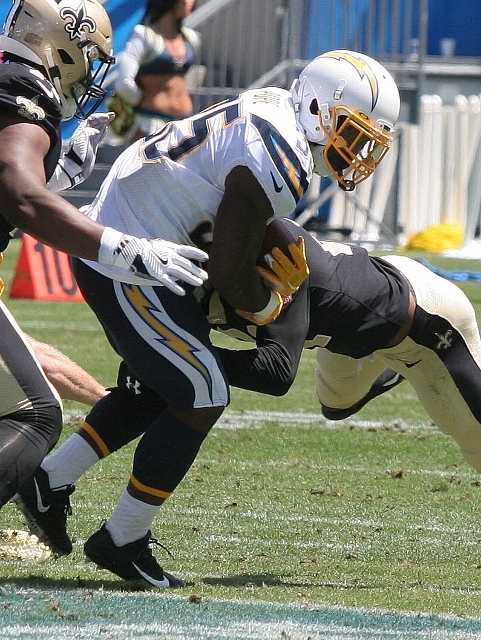 Troymaine Pope fights for some yards. (Photo by Duane Barker.)

The Chargers were unable to move the ball however and were forced to punt it back to New Orleans. The Saints then pieced together an 11-play, 69-yard drive that Hill capped with a one-yard touchdown pass to Ozigbo. New Orleans surprisingly elected to go for two but Hill was sacked and the Chargers maintained the one point advantage.

But LA was unable to generate anything offensively and the Saints got the ball back. Lutz then capitalized with a 28-yard field goal to put New Orleans up 19-17.

On the Chargers next possession, Jumper jumped the route and the Saints had the W.

“I thought we played well but I was frustrated that we couldn’t finish the game,” said Chargers had coach Anthony Lynn. “Taysom Hill just took over in the fourth quarter. You have to give him credit. But I liked our defense overall. We bend but don’t break. I thought our red zone defense was pretty good.”

The Chargers fell to 0-2 in the preseason with the loss. They will host the Seattle Seahawks next Saturday night at 7:00 p.m. The Saints are now 1-1.