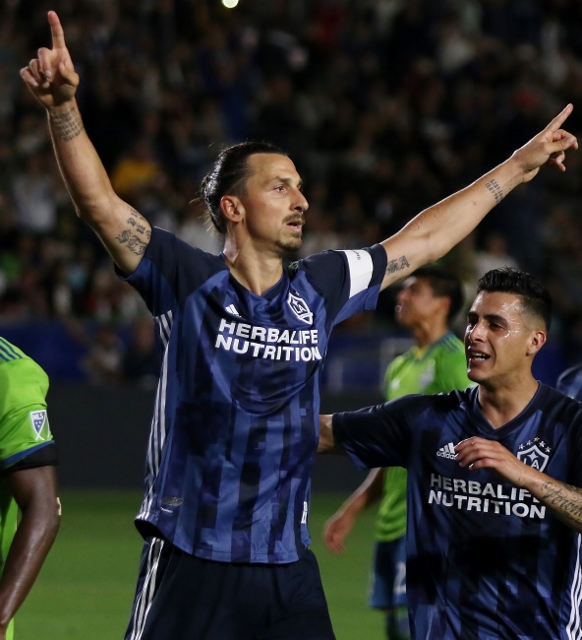 (Carson)- The Galaxy gave up an own goal in the 82nd minute and had to settle for a 2-2 tie with Seattle Saturday night before a packed house at Dignity Health Sports Park.

The Galaxy, despite playing with 10 men for a majority of the match after Daniel Steres was hit with a red card six minutes in, was still in great position to get the victory when Zlatan Ibrahimovic scored on a penalty kick in the 65th minute to take a 2-1 lead.

But in the 82nd Galaxy goalkeeper David Bingham came out to interfere with a long Seattle pass but instead he headed it of the head of defenseman Jergen Skjelvik and into the net for an own goal to tie it at 2. Skjelvik tired to chase the ball down after it deflected off his head but no avail as it rolled into the back of the net. Just like that a W turned into a draw and three points turned into one.

“I was proud of our players and the way we fought and they absolutely deserved more than one point,” said Galaxy coach Guillermo Barros Schelotto. “Yes it was frustrating to not get three points and allowing that goal after we had the lead.”

Three minutes into the game the Galaxy had a shot to grab the lead but Diego Polenta’s header off of a corner kick was saved by Seattle goalkeeper Stefan Frei.

Three minutes later Frei came through again diving and knocking away a blast by Christian Pavon. Then the Galaxy’s Jonathan dos Santos appeared to have been awarded a penalty kick when he was fouled in the box but after a review it was overturned and it was ruled a handball on dos Santos.

Immediately after, also in the sixth minute, LA defenseman Steres was red carded and ejected for pulling down Raul Ruidiaz leaving the Galaxy one man down with at least 84 minutes remaining in the match.

Jordan Morris picked up a yellow card for the Sounders in the 21st minute.

In the 42nd minute the Sounders drew first blood when Ruidiaz beat Bingham as he got by the LA defense and booted it into the left corner for a 1-0 Seattle lead.

The Galaxy pulled even in the 45th minute as Ibrahimovic scored on a header off of a perfect cross from Sebastian Lletget.

Four minutes of additional time were added in the first half but it remained status quo and the teams went into the break tied at one. 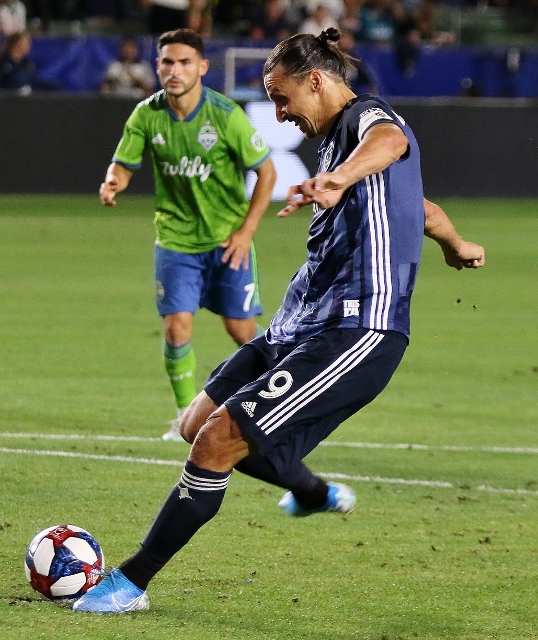 In the 65th minute Ibrahimovic was knocked down in the box and earned a penalty kick. He converted  (of course) for his second goal of the night and 20th of the year to give the Galaxy a 2-1 lead. For Ibrahimovic he became the third player in MLS history to score 20 goals in consecutive seasons.

In the 70th minute Bingham preserved the lead denying Nicolas Lodeiro of a goal when he fired one at the net.

A minute later Ibrahimovic barely missed a hat trick as he was unable to convert after a pass from Uriel Antuna.

Then disaster struck when in the 82nd minute Bingham was unable to control the long pass and it turned into an own goal off of Skjelvik.

Three minutes of time were added to the second half but neither team could score and it ended in a draw.