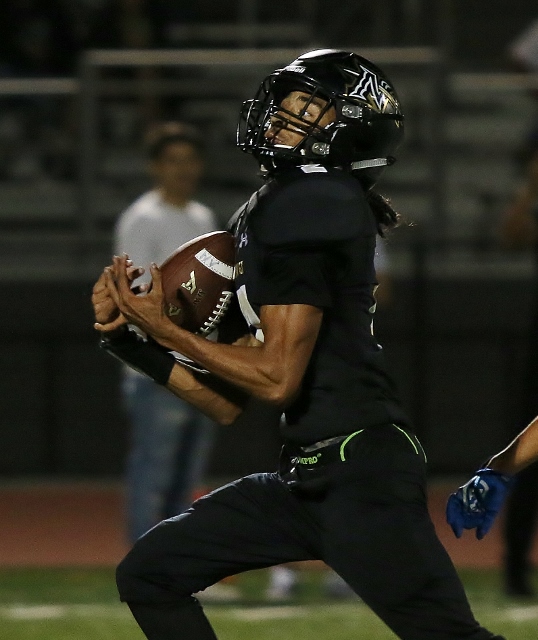 Damion Thompson had a huge night for Northview. (Photo by Duane Barker.)

With the season being postponed until January we thought we would take a look at some Zero Week action from last year. This story was posted one year ago today – August 22, 2019. This was the first game MVS covered for the 2019 season. It was a Thursday night game at Covina District Field. Tim Peterson wrote the story and Duane Barker took the pictures. Enjoy.

(Covina) – Damion Thompson caught two big touchdown passes, Deshon Thompson had a huge punt return and James Jimenez threw for two and ran for one to lead Northview to a 31-23 win over El Rancho Thursday night at Covina District Field to kick off the 2019 football season.

The Thompson twosome (also brothers) did the bulk of the damage for the Vikings. Damion hauled in a 42-yard scoring strike from Jimenez on Northview’s first possession to give the Vikings a 7-0 lead. In the third quarter with the Vikes up 17-8, Damion got loose for a 76-yard bomb from Jimenez to give Northview a 24-8 lead.

Brother Deshon retuned a punt 58 yards for a score to make it 14-0 early in the second quarter. Damion caught seven passes for 163 yard and the two scores while Deshon hauled in eight for 128 and the 58 yard punt return. Jimenez threw for 296 yards and ran for 103 yards to round out the big three.

Northview QB James Jimenez made a difference with his arm and his legs. (Photo by Duane Barker).

By looking at those numbers one would think Northview won by four touchdowns. But the game wasn’t secured until El Rancho quarterback Chris Andrade threw an incomplete  pass on fourth down with six seconds left. Only then could the Vikings breathe a sigh of relief. The Dons just wouldn’t go away.

They were down 14-0 when with no time remaining on the first half clock Andrade found Oscar Mendez in the end zone for a 21-yard touchdown pass. El Rancho head coach Adrian Medrano went for two and Brett Yatco responded with a two point run to make it 14-8.

The Dons looked dead and buried again after Thompson’s 76-yard TD catch made it 24-8 late in the third. But Roman Rojas scored on a seven-yard run and another two-point conversion – this one on an Andrade to Mendez pass – and it was 24-16.

Jimenez capped a drive with a six-yard run for a 31-16 Northview lead but El Rancho answered right back with a 51 yard strike as Andrade hooked up with Mendez to get back within a score with 6:14 left. 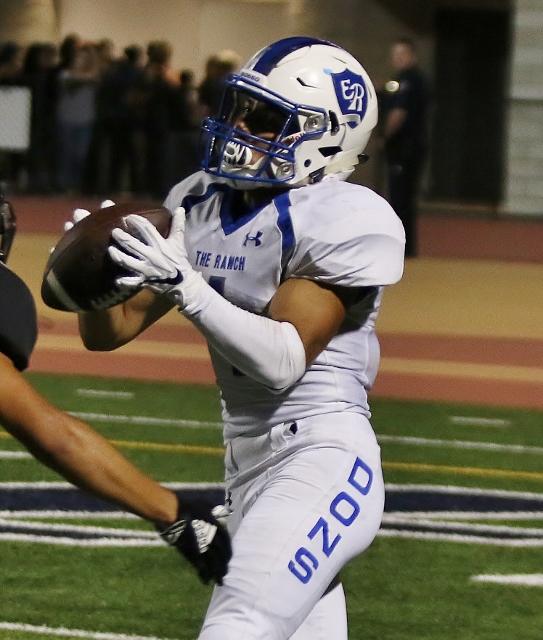 ER’s Oscar Mendez kept the Dons in the game. (Photo by Duane Barker.)

Northview was forced to punt and El Rancho got the ball back with 1:13 remaining at its own 33-yard line. But this time the Viking defense held and they claimed the victory.

Mendez had a big game for the Dons with three catches for 93 yards and a pair of scores. Rojas had 19 carries for 92 yards and a touchdown and also caught five passes for 45 yards. Andrade threw for over 100 yards and rushed for 30 but it wasn’t enough.

This night belonged to the big three aka Thompson, Thompson and Jimenez.

34 Comments to "One Year Ago: Vikings Big Three Too Much for El Rancho"