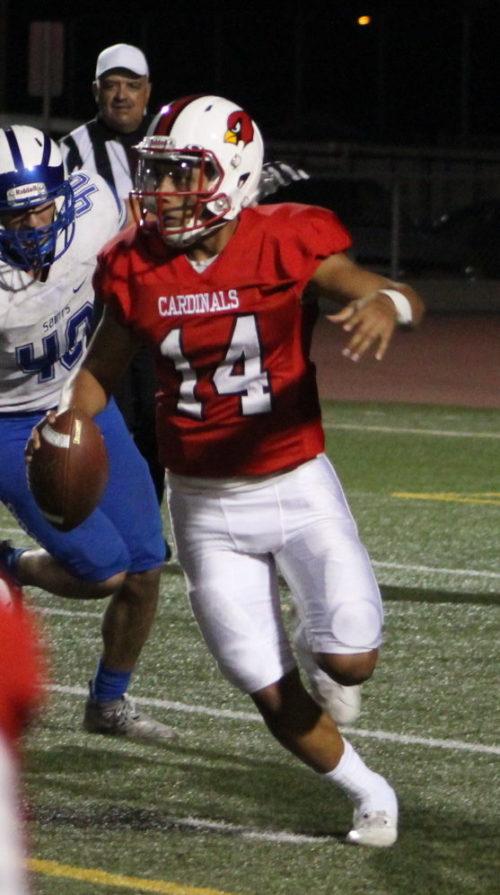 JC Lopez led the way for Whittier throwing for 378 yards and three touchdowns.

(Whittier) – Whittier outscored San Dimas 28-6 in the second half to overcome a 13 point deficit and beat the Saints 35-26 Thursday night at Pioneer High School.

Whitter, down 20-7 at halftime, struck quickly in the third quarter when JC Lopez found Christian Guerrero on a 64-yard pass play to cut the lead to 20-14. It was the second touchdown of the night for Guerrero, who also took a Lopez pass 63 yards to the house in the first quarter.

The Cardinals then forced a San Dimas turnover and took over at the Saint 35. After a five yard penalty they cashed in when Johnathan Arceneaux broke loose for a 40-yard touchdown romp. Just like that Whittier had its first lead of the night at 21-20 with 5:54 left in the third quarter.

The San Dimas offense couldn’t get it going in the second half. On its next two possessions they were stopped on fourth down and were then forced to punt. The Cards had stolen the momentum from the Saints and they clicked again in the fourth quarter. They drove 70 yards on seven plays with Lopez connecting with Jasper Mendoza for a 22-yard touchdown strike to finish the march. Lopez added the extra point and Whittier had a 28-20 advantage with 8:39 left.

The Saints, now fighting for their lives, used just 27 seconds to answer. Ryan Bulick hit Jacob Buccola on a swing pass and Buccola did the rest outrunning the Whittier secondary for a 62-yard score. The Saints went for two but a running play was stopped short at the goal line.

Whitter then finished the job after recovering another San Dimas fumble. Starting at the Saint 46, the Cards used four plays to get in the endzone with Arceneaux going the fnal two yards. There were still just over four minutes remaining but the script had been written and the Cardinals had their victory.

San Dimas seemed to be in control in the first half. Buccola capped a 65-yard drive on their opening possession with a four-yard. After the big Lopez-Guerrero strike tied it for Whittier San Dimas went up 13-7 late in the first quarter on a two-yard TD jaunt by Ben Goodrich, which was set by a big Buccola run.

Early in the second quarter, the Saints took advantage of a short Whittier punt and set up shop at the Cardinal 31. Goodrich immediately busted off a 31-yard touchdown scamper to put San Dimas up 20-7.

The Saints took that lead into the half before the wheels came off.

Lopez had a huge night for Whittier completing 15 of 31 for 378 yards and 3 touchdowns. Arceneaux ran for 75 yards and two touchdowns while Guerrero hauled in four receptions for 172 yards and two scores. Mendoza also added four catches for 66 yards.

Buccola led the San Dimas offense with 97 yards and a touchdown on 19 carries. He also caught three passes for 89 yards and a score.

San Dimas, now 1-1, was hurt by a pair of turnovers. Whittier, with its first win of the year, improved to 1-2.