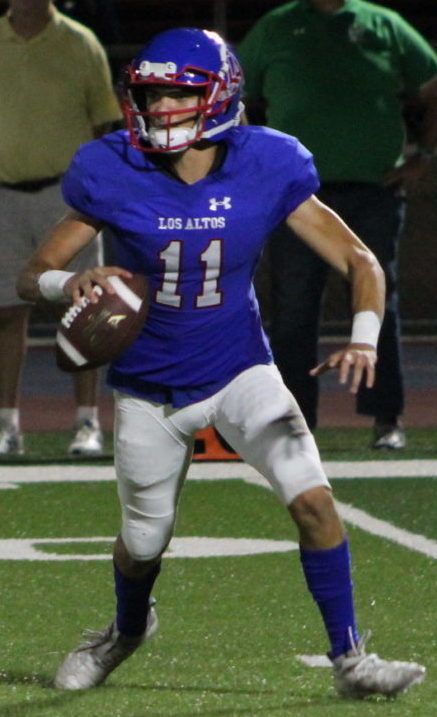 David Hacegaba threw a 51-yard touchdown pass to get Los Altos rolling in the third quarter.

Tied at 14 at the break, Los Altos jumped on Monrovia early in the third quarter when David Hacegaba connected with Zedekiah Rodriguez on a 51-yard touchdown pass. It was the second long touchdown of the night for Rodriguez who also hauled in an 80-yard strike from Justin Gayton who started behind center for the Conquerors.

Later in the third quarter, Monrovia quarterback Nick Hernandez was hit and the ball popped loose allowing Los Altos to take over at the Wildcat 10. The offense stalled but Jacob Gonzalez booted a 27 yard field goal for a 24-14 advantage.

Monrovia’s offense wasn’t able to get anything going in the second half. Rodriguez was a thorn in the Cats side again when he returned a punt down to the Monrovia 20 yard line in the fourth quarter. Four plays later Jonathan Lopez bulled in from the one yard line with 8:30 left to give the Conqs a 31-14 lead. For all intents and purposes that was the ballgame.

After another Monrovia punt, Los Altos chewed up the clock on the ground and Gonzalez kicked a 36-yard field goal with 36 seconds left for the final tally.

After a scoreless first quarter, Monrovia got on the board on a 17-yard touchdown pass from Hernandez to Mario Minor early in the second. The score was set up by a Los Altos fumble at the 17 that the Cats pounced on. The extra point was missed and it was 6-0.

Los Altos responded two minutes later when Isaiah Verdugo caught a 56-yard pass from Gayton and took it to the house for a 7-6 lead.

Monrovia put together an 11-play, 67 yard drive, that was helped along the way by penalties, with Devon Mayes scoring from eight yards out. Zeph Pasosia ran in the two -point conversion to put the Wildcats up by seven.

Los Altos got even with just over a minute left when Gayton hit Rodriguez on the 80-yard bomb.

The Conquerors then took over in the second half.

“Hats off to Monrovia. They’re a good team. But we played as a team for four quarters tonight,” said Los Altos Coach Travis Brown. “Our defense did a great job of shutting them down.”

Los Altos outscored Monrovia 27-0 after the Cats scored late in the second quarter.

For the Conquerors Rodriguez had 131 yards in receptions and the two touchdowns. Gayton threw for 136 yards and Hacegaba 99. Hernandez had 155 yards passing for Monrovia.

Los Altos remained unbeaten with the win improving to 3-0 while Monrovia fell to 2-1.

2 Comments to "Los Altos Locks Down Monrovia in Second Half"