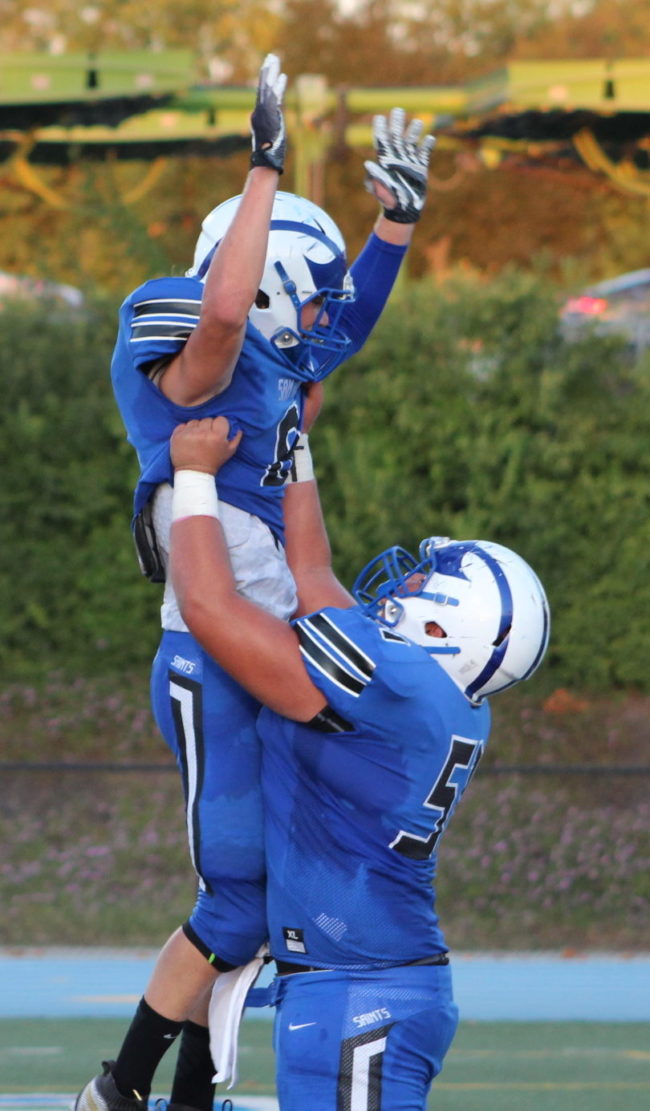 Roosevelt (4-6 BIG VIII #3) at South Hills (5-5 Hacienda #3)
Two third place teams will be going at it. South Hills has the advantage of being at home. This isn’t Roosevelt (East LA) but instead Roosevelt (Eastvale). The Mustangs hail from the tough Big VIII league that features powers like Centennial and Norco. The Huskies were in a pretty strong league themselves in the Hacienda. The home field should get them over the top. South Hills survives.
South Hills 24 Roosevelt 21

Downey (4-6 SGV #3) at La Mirada (7-3 Suburban #2)
Downey has to be the best 4-6 team in the area. The Vikings are coming off one of the toughest losses you’ll ever see but they now can use that for motivation. Mike Moschetti has La Mirada back on track guiding the Matadors to a second place finish in the Suburban. This one could go either way. It’s a shame one of these two traditionally successful programs has to lose in the first round. The Matadores hold on.
La Mirada 28 Downey 27

El Modena (7-3 Crestview at large) at St. Paul (9-1 Del Rey #1)
This has been St. Paul’s year so far. Even when the Swordsmen lose they win as evidenced in a forfeit win over Narbonne. St. Paul rolled through the Del Rey League and the Swordsmen haven’t been tested since September. This is a team that went toe to toe with Sierra Canyon. El Modena will come to play but won’t go home happy. This team, an at large in the Crestview, simply doesn’t have enough firepower to match up with St. Paul. Swordsmen win handily.
St. Paul 38 El Modena 7

Burbank (4-6 Pacific #3) at Don Lugo (4-6 Mt. Baldy #2T)
Probably not the way either team planned their season out back in August. Both teams finished with overall records of below .500. Burbank took third in the Pacific while Don Lugo tied for second in the Mt. Baldy. This is a pick ’em game. Burbank on paper played the tougher schedule. Don Lugo lost six of its first seven games before winning its last three. Burbank should have enough.
Burbank 21 Don Lugo 14

La Salle (6-4 Del Rey at large) at San Dimas (9-1 Valle Vista #1)
La Salle has had a nice bounce back year under first year head coach Ben Buys. The Lancers did have their problems in the Del Rey League but a six win season after last year’s disaster is a success. San Dimas lost two games on the field but got a win back when Whittier forfeited a win. The Saints do what they always do – pound the ball until they wear you down. That usually happens in the fourth quarter. La Salle will put up a fight but in the end San Dimas will run them over. The Lancers wont be able to stop the bleeding. San Dimas moves on.
San Dimas 35 La Salle 17

Bonita (8-2 Palomares #3) at Highland (7-3 Golden #2)
Bonita vs. Highland – Part 2. Last year Steve Bogan’s Bearcats fell to Highland in the Division 10 semi finals. This year they face them in the first round of Division 9. Bonita’s only two losses came in the Palomares League that has to be considered the best in the area. Ayala and Glendora which finished one-two in league are both capable of winning a CIF title. Highland again is a power. The Golden league prepares the Bulldogs for playoffs. Bogan and the Bearcats will be more than ready this time and they’ve seen this move before. This time it will have a different ending. Bonita gets the W.
Bonita 31 Highland 24

Diamond Bar (5-5 Mt. Baldy at large) at Alhambra (10-0 Almont #1) Moor Field
Alhambra, after a perfect regular season run now has their sights set on a CIF championship. Good year for Diamond Bar to get in the post season but the Brahmas have no shot of slowing down the Moors. Alhambra in a rout.
Alhambra 42 Diamond Bar 14