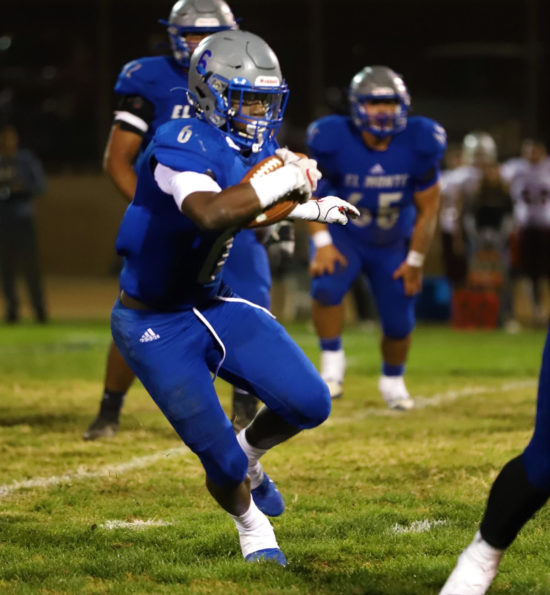 DIV 5
St. Paul (9-2) at Yorba Linda (10-1) (Valencia High School)
Both teams are number one in their leagues and both are coming off big shutout wins in the opening round. St. Paul has talent all over the field and has a couple of signature wins. Plus the Swordsmen took Sierra Canyon to the wire. Yorba Linda has been impressive as well with victories over La Mirada and Orange. It will be a slugfest right down to the fourth quarter. St. Paul holds off the Mustangs late and gets the W.
St. Paul 24 Yorba Linda 21

DIV 6
La Serna (11-0) at Los Altos (9-2)
This may be the best game of the weekend. La Serna continues to roll and last Friday night dropped 56 on a good Warren team that just beat Downey the week before. Los Altos seems to be hitting its stride. The Conquerors have won four straight since a tough seven point road loss to Diamond Ranch. They had to travel to San Juan Capistrano last week to get the win in the first round. There’s a strong case for either team winning this one. La Serna’s offense looks unstoppable. The Lancers have scored at least 40 points in every game except one. Lancers remain unbeaten.
La Serna 38 Los Altos 31

DIV 9
Foothill (11-0) at San Dimas (10-1)
San Dimas took care of business last week and for the effort the Saints get the number one team in the division. Foothill is no joke. The Knights beat Yorba Linda which is in Division 5. They also beat Tustin, a Division 8 team. In fact, they beat everybody. They’re 11-0. The Saints have a few big wins under their belt as well. They won the Valle Vista beating Division 7 Northview along the way. They’ve won eight straight since falling to Bonita in the Smudgepot in September. This will be San Dimas’ toughest test of the year. The Saints will answer the bell but can their defense make enough stops? Foothill makes one more.
Foothill 35 San Dimas 31

Monrovia (10-1) at Newport Harbor (8-3)
Monrovia, which rolled through the Rio Hondo, now faces a team that finished fourth in its league. But in the Sunset Newport Harbor is dealing with likes of Corona Del Mar and Edison. The Wildcats record had just one blemish – a 34-14 loss to Los Altos back in early September. The Wildcats are on a roll. They have won eight straight and have dropped at least 40 points on five different teams. This will be a test. Second round games always are. But the Cats will pass the test with flying colors. M-Town moves on.
Monrovia 28 Newport Harbor 24

DIV 10
Crescenta Valley (11-0) at Eisenhower (7-4)
Crescenta Valley is still perfect after taking care of Peninsula while Eisenhower, which hails from the San Andreas, rolled over Big Bear. The Eagles however have four losses on the year and don’t seem to have the same firepower as the Falcons. CV is playing well on both sides of the ball. They should win handily.
Crescenta Valley 31 Eisenhower 14

DIV 11
Chaffey (10-1) at Muir (9-2)
Both teams are pretty evenly matched. The Mustangs lost just twice all year while Chaffey dropped one. Muir has the advantage of home field and of playing in a tougher league than Chaffey. The Pacific, with the likes of Crescenta Valley and Burbank, are on a different level than the Mt. Baldy. Muir may get off to a slow start but by the fourth quarter the Stangs should be rolling. Muir advances.
Muir 38 Chaffey 21

El Rancho (9-2) at Hemet (7-4)
El Rancho is a team that continues to impress. The Dons lost their first game of the year to Northview but have lost only once since – to undefeated La Serna. Hemet is coming of a nice win over Arroyo and now gets spared the bus ride getting the Dons at home. But El Rancho plays well on the road. The travel shouldn’t bother the Dons. It will go down to the wire but the ER comes out on top.
El Rancho 27 Hemet 20

DIV 12
Nordhoff (8-3) at El Monte (11-0)
El Monte may fall eventually but it wont be this week against Nordhoff. The Lions have been mauling everybody in their path and they’re not about to go down yet. The real test will be next week against Rio Hondo Prep. Nordhoff had a nice year but it ends Friday night. Lions not only win but it could be a rout. El Monte is headed for the semis.
El Monte 45 Nordhoff 17